Review: Married with Zombies by Jesse Petersen, book 1 of the Living with the Dead Series 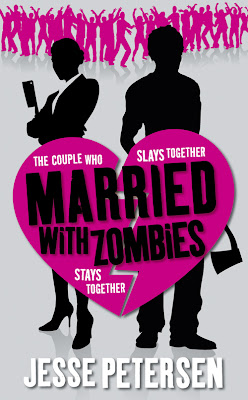 Sarah and Dave are attending marriage counseling to try and save their doomed relationship – not that it’s helping very much. But who would have thought that saving their marriage, would mean killing their marriage counselor?
To be fair, the counselor was trying to eat them at the time. A zombie outbreak has come to Seattle and before long, they’re outnumbering the living people. Faced with the shock of what has happened and then the desperate need to flee the city, Sarah and Dave have to come together as they never have before, as they scramble to survive, and try to find somewhere that is safe – or at least get out of the city and its hordes of the undead. Assuming, of course, that anywhere is safe as zombies spread further and further across the west coast
Of course, marital problems don’t just disappear – but there are few greater bonding experiences than  covering each other with stolen shotguns, as you try to survive the zombie hordes.
I did not expect this book to be nearly as funny as it was. After all, it’s a book about a zombie apocalypse. You expect fear and horror and loss and grief – you expect people to find out what they are capable of and the extremes of evil people can be pushed to in a crisis – and even the extremes of evil they will indulge in when they feel there is no-one to stop them. You expect to see people grow and develop as they learn what they are capable of an the extreme
And we have all of that. We have loss; we have some truly poignant scenes of loss and grief as they confront family and friends who die to the zombies – or who need killing before they turn into zombies. We have growth as they both step up to the necessities of a zombie infested world. We have hard choices as they have to choose what to do to be safe, as they lose people, as they have to leave people behind. In short, we have all the themes and epic moments and emotional moments you’d expect from a zombie apocalypse book.
Yet, despite all these major extreme issues, these heartrending issues, and these powerful scenes and character development it was still funny. Laugh out loud, shockingly funny at times – but without taking way from the power and the impact of those other scenes. Perhaps it was, overall, lighter than you normally see in zombie books, but not much more and those big, heavy scenes were still there – but alternated extremely well with the humor.
We also have growth of them as a couple – and that’s a really interesting twist to see. They started as a couple whose marriage was on the rocks with both of them considering divorce. The zombie apocalypse doesn’t make it all go away but yes, they actually work through their issues and grow as a couple resolving the problems that dogged their marriage even after they killed their marriage counselor who tried to eat them.
With all this growth and focus on these 2 characters I have to say that both of them were extremely real to me – in their interactions, as people before the apocalypse and as people during it. They were extremely well written and developed and I could easily identify with them as real, good people. They made few decisions that I would consider foolish and none that were ridiculous or unrealistic
I can’t think of any flaw in the writing and I usually try to think of some critique. It was well paced, managed to balance the various elements of the book – including elements of humor and grief that I never expected to work together – extremely well. It was clean without being overwritten but nor was it sparse and lacking appropriate scene setting or description. The plot was exciting and tense where appropriate – with the threat of zombies behind every corner, in every shop, at every stop. There is also an interesting element in that the newly turned zombies are as intelligent as they were in life. It adds an extra horror movie level of fear and tension as someone can be acting perfectly normal, even cunningly luring you in, while they are plotting how to bite you.
Inclusion-wise we very much focus on one couple who are, as far as I can tell, white. We have one Asian side-character they leave behind and a few Latino characters who are zombiefied but I think that’s the entirety of the inclusion. Sarah is a strong character who is every bit as powerful, capable and dangerous as Dave – if anything she may have the higher kill count. They make decisions after discussion – and arguing – about things together and at no point is she considered the weaker party.
There is an element, towards the end of the book, of Dave becoming more of the big tough male protector over Sarah and his sister Gina that Sarah finds attractive – but so far it hasn’t developed into anything truly problematic beyond him shifting out of his previous apathy pre-zombieness. I just wish Sarah wouldn’t tie his pro-activeness, his standing up to Gina et al as being “a man taking charge in a bad situation”. It could go poorly in future books, but so far it isn’t there.