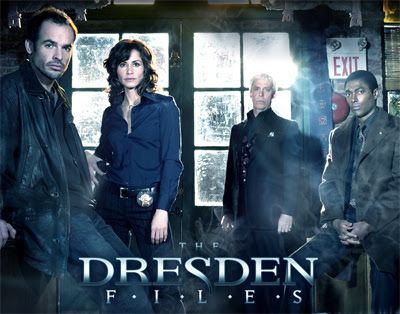 This episode Harry has a client who wants him to communicate with the dead – which is far from his favourite thing but far be it from him to be picky. The client keeps feel his daughter’s presence, but Harry feels nothing. The girl was killed in a robbery at her father’s antique store – when a man killed her, stole an artefact then died stealing someone’s car to try and escape.

The ghost doesn’t take kindly to Harry not believing and treats him to a flash back of the events of her death.

Of course, speaking of annoying ghosts, we have to flip to Bob while Harry and Bob discuss exactly what the ghost was trying to show Harry and why, while Harry cooks dinner (I actually quite like to see protagonists do mundane things like cook – so many of them seem to live on air and none of them ever ever ever need to go to the bathroom).

But the ghost won’t move on so Harry is going to follow it up – so he goes to bug Murphy, his handy-dandy police contact, to get the files on the robbery (which involves an unnecessary side-trip to info-dump flirty lady) to find that the person who shot Boon (the thief) during the carjacking gone wrong was a very rich Mr. Miller. Info-dump lady also has the ancient Egyptian tablet – the lock of Anubis – that has been shattered.

Harry goes to visit Miller as a representative of his client to talk more about Boon’s death – and finding a statue of Anubis in his home. Of course, Bob is very very good at pointing out that this is hardly a massive coincidence, but his doubts are treated as unreasonable as opposed to, well, perfectly reasonable. I have to divert a little here to question the idea that so many Urban Fantasy writers think this kind of knowledge is soooo rare. Anubis is not exactly an obscure deity, someone having an Anubis statue should not instantly link them to any kind of Ancient Egyptian paraphernalia any more than a woman wearing Ankh jewellery is secretly an Egyptian Sorceress.

Still, we make the leap and decide that this points to a link between Miller and Boon, just in time for Murphy to turn up to ream Dresden out for harassing Miller – and thankfully Murphy also treats his Egyptian art link as highly dubious.

Of course Harry ignores this warning and goes to check up further – and finds that his client was selling the Lock of Anubis online – and finds that a prisoner bid on the item while it was for sale. A Professor Sabin, a professor ancient Egyptian mythology who mummified a kid alive (why… why would he do this? I mean, Egyptology 101 makes it clear that mummification is not something practiced on the living… how would obsession with Egyptology lead to this?). The ghost also helpfully nudges them towards Sabin.

So Harry goes off to see Sabin in prison and found that Sabin and Boon were friends who discussed Ancient Egyptian funerary rites and finds that Sabin has an Egyptian tattoo on his neck just as Miller has – and apparently so does Boon. This startling evidence he takes to Murphy who….. treats it with the contempt it deserves.

Of course, Dresden’s wild theories are justified when someone starts shooting at him from a car. Dresden takes it to Murphy – as he should – but then accuses Miller of copycatting Boon because the attacker wore a ski mask and carried a shotgun. Really? This is copycatting? Using a gun and concealing one’s face are not the hallmarks of a copycat. This isn’t an MO – this is drive-by shooting 101.

Then he gets to see the autopsy photos of Boon and sees he doesn’t have the tattoo Sabin mentioned. But looking back through the records they find he had them in prison.

And this leads to Murphy joining Harry to interrogate Miller… why this 180? Because Boone, a known criminal, has been researching Miller, a wealthy man. Uh-huh. She then goes with Harry to confront Miller on their evidence - an interest in Egyptology and similar Egyptian style tattoos. Yes, this is some crack evidence here. Murphy theorises that Boone stole the tablet for Miller and then dropped it – so Miller shot him (in the street in public no less) to punish him.

And then Harry strikes on the idea that Boone’s tattoo wasn’t transferred using the tablet allowing Boone to transfer bodies to Miller (and that he’s planning on moving to a new victim soon). Hey it makes as much sense as Murphy’s theory. And it’s right! So rather than dismissing Harry as being ridiculous, Miller snaps and holds Murphy at gun point – then kill himself and leap to Murphy’s body. Boone/Murphy shoots Harry – but his magical shield bracelet from his mother protects him.

Thankfully earlier in the episode Murphy cut her finger on Dresden’s door – allowing Harry to use it to create a voodoo doll (Voodoo as black magic again, alas this is an over-tired trope to say the least. It’s not like Harry doesn’t have enough options of sympathetic magic in European traditions that he actually draws upon) to attack Murphy’s body. Bob is not impressed by Harry’s use of black magic. Bob presents a great alternative plan but Harry is insistent on his plan. And he needs a banishing spell to get Boon out of Murphy, but Egyptian magic isn’t Bob’s speciality and Harry goes to Sabin instead – as a professor of Egyptology who told Boon about the lock of Anubis to begin with.

Next to flirty info-dump woman to get the lock of Anubis and then uses his voodoo doll to hurt Boone/Murphy and convince him he can reach Boon/Murphy wherever they go, goading him into hunting down Harry and kill him to be free.

On comes the fight scene in which Harry doesn’t do very well but uses the lock to banish Boone from Murphy and the client’s ghost can now rest in peace.

We enter an epilogue where Murphy is disturbed, she’s physically fine but dreams of Harry performing miracles – she has semi-memories of being possessed. she also tries to extract a promise from Harry that he will never lie to her again - which, of course, he cannot do

As far as a mystery goes, this was poor. We had not so much leaps of logic as plummets filled with lots of coincidences to hold it together (Miller having a massage so Harry goes see his naked back, for example) and ghostly “hot and cold” games. We go from a tablet to Egyptian art to random prison bids that are all supposed to be highly indicative. And through this Murphy is being sceptical and I’m supposed to, what? Roll my eyes at how cynical she’s being? Be angry that she’s covering for the rich guy? Why? She’s right – even with magic involved Harry has absolutely nothing and he only got that through a series of logical leaps and bizarre coincidences.

I had to devolve to snark, I’m sorry, but I did. The convoluted connections and leaps here that the story just didn’t hold together.

I’ve mentioned my dislike of voodoo being presented as black magic, again. I’m also less than happy with Murphy becoming a victim to be rescued – and in the first episode when she’s really involved. I’m trying really hard not to compare the series to the book – but this is Murphy here! Do not make her helpless and need rescuing.