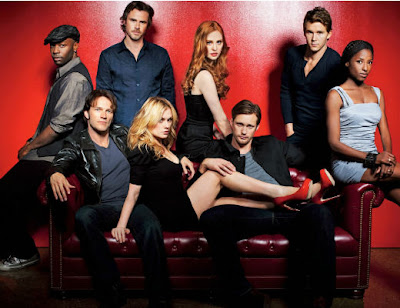 When we left Tara last episode she was cooking under the lights of a sunbed – thankfully, the extremely not amused Pam rushes in to save her vampire child. After some argument (and disgust on Pam’s part) Pam invokes maker command with her usual, awesome bored mien.

Bill and Eric’s excellent adventure continues, with them being rescued by the Authority, charged with hunting down Russell – and Eric is back at Fangtasia in time for Pam coming home with Tara. Pam actually credits Sookie for this (oh no, Pam, her promise to you was forgotten 5 seconds after it came out of her mouth).

Eric manhandles Pam to demand if she let Russell go – which, obviously she didn’t, and also outrages her that he’d suggest that. After a century together, he has so little trust in her – she demands he release her if she means so little to her so she can leave.

Bill, being the Angstiest Vampire of them All, is probably a good one to comfort Tara about becoming a vampire – and Tara  throws in her best line of the night when asked whether Sookie knows:

“How many of us have nearly died to save her sorry ass? Well I did them all one better”

Later, Pam wakes from her coffin and watches Tara sleep; and she talks to Eric. Eric explains that they’re on a suicide mission – the Authority and Russell are too dangerous. He doesn’t want to catch her in the cross fire of the hole he’s dug – he has to release Pam, not because he doesn’t trust her but because he doesn’t want her to die with him. Pam accepts and understand – and Eric releases her. It’s powerful and touching and long overdue to see these 2 together again.

Speaking of touching scenes; Bill and Jessica are searching for bugs in his office during which he makes it clear he accepts her as an adult and capable of looking after herself. Jessica also makes a plea for him to help and comfort Sookie (Jessica as well? When did she enter the Sookie orbit?) but Bill says Jessica needs to look after herself first (yes yes yes).

Tara wakes to find Pam and Melanie (dinner). Tara doesn’t want to feed on a person – but Pam invokes Makerdom to force her and tell her what it is to be a vampire, to be no-one’s victim, to drink blood etc etc. I’m not happy with Pam overusing her maker authority to control Tara, but I am happy to see a possibility of Tara finding happiness and fulfilment as a vampire.

Lafayette is now realising the horrible truth – without Tara he is now reduced to the one friend who has to tolerate Sookie and clear up her bullshit. See, Tara, you thought being a vampire was bad? This is a fate worse than death. Sookie has told Alcide about Debbie’s death – despite Lafayette already intervening once like that. She just can’t keep lying – y’know, she could have tried! One day does not constitute being driven up the wall by the lies! Lafayette is not pleased and gives her a very nice slap down – he’s not selling her out, but she can’t just keep quiet? Sookie has to do the right thing, she just has to (well, the last 4 seasons she hasn’t, as I’m sure Tara can attest. In fact, how often has Sookie “done the right thing” rather than “done whatever Sookie wants”?) to which we get the best line of the night – let’s have a direct quote here:

“You survive, you always do. But goddamn do you leave a trail of bodies behind. Y’know what, you the fucking angel of death.”

Oh yes, yes yes. In fact I’m going to rewind that and watch it again. And again. This is almost as good as watching Tyrion slap Joffrey on Game of Thrones.

Alas, Sookie needs a shoulder to cry on after that – Jason, you’re it. And she tells Jason that she’s turning herself into the police for murdering Debbie. That’s right Lafayette, not only has she told Debbie’s ex-boyfriend that she killed Debbie, but Sookie is now telling a police officer. And it’s overheard by Jessica as well. Someone get Sookie a loud speaker – is there any way she can get on TV and tell the whole state of Louisiana?

I think that the writers realised that rather than pitying Sookie, we’re all cheering on the people putting her in her place. So we’re treated to Sookie hearing the minds of Holly and the whole bar, all judging Sookie for what she did to Tara (how many of them even know!) or for sundry other reasons. In case you forgot, yes Sookie can read minds – I know she has a habit of forgetting this. She runs and hides.

Lafayette, meanwhile, is having a devil-face moment over Sookie’s car (it is a very very ugly car, so I understand) making it levitate. This leads to Sookie driving it and the brakes not working and she crashes and burns horribly. Hah, you wish – no, she leaps from the car at 80 miles per hour (apparently) just before it crashes. Sookie goes home and starts draining every bottle of booze she can find.

And Alcide has decided to go to Debbie Pelt’s parents to tell them that Debbie has been murdered – but she said he was killed by Marcus, the ex-packmaster. (See, Sookie, this would be a lie. Learn to do it.) There’s a great big crying match and hopefully we can put this storyline to bed.

This apparently contents the Pelts who let Andy know that they’re satisfied – yet Andy isn’t. He doesn’t understand them leaving so abruptly and thinks there’s more to investigate, much to Jason’s consternation. Because he has a judge who owes him a favour he was going to get a search warrant for all the houses close to where the car was abandoned – including Sookie’s. But Jessica zooms in the room and puts a full vampire whamy on him so Andy won’t even remember Debbie Pelt existed. Good to have a vamp on call.

Later, while Sookie is out of her brain, Lafayette calls her and asks if she’s ok having found her car. He’s worried about her – and worried about him and his magic doing it – but Sookie is too drunk/self-absorbed to listen. And, anyway, Alcide is at the door letting Sookie know he lied to the Pelts and has joined the big list of people willing to lie for her and cover for her. They get drunk and, lo, Sookie and Alcide start kissing (RUN Alcide! RUN you fool!)

Which is witnessed by Bill and Eric outside who think she’s going to be useful helping them find out who let Russell free (seem, knew there was a reason why her mind reading was remembered) and if she’s not going to help willingly, they’re happy to force her.

At the Authority, Salome and Roman are listen to the sounds of Nora being tortured about her Sanguinista connections (the stereo must be broken, you make do). The torture doesn’t seem to be pulling anything out of her, so Roman decides to throw Salome at her (this seems to be the standard Authority operating procedure: 1) torture 2) send in naked Salome)

The other Authority councillors are all bragging about their achievements, watching Bill and Eric’s tracking signals, sniping, worrying about sanguinista uprisings on 4 continents and watching Nora pray (pretty much proving she is a sanguinista). With these leaders, who is surprised people don’t have faith in them?

Salome and Roman go to see Nora to try and make her give up her confederates. She completely refuses to be broken and waits for death, unmoved by Salome or torture – but Roman threatens to kill Eric and Bill with his handy stake-app. Nora asks for a guarantee that Eric and Bill won’t be killed if she tells them: Salome swears on the blood of Lillith (sounds very sanguinista-ish) that they will live.

Roman goes to have a nicely dramatic meeting with his Authority Chancellors, while toying with his stake from the Judas Tree. Nora has revealed another traitor which apparently Roman has confirmed. The child vampire Chancellor has been killing humans for funsies, recording it then sending the message out to Sangunistas – naughty boy. Staking time.

In the world of completely unnecessary storylines, 2 of the shifters Sam used to run with along with Luna have arrived in his bar to invite him back to party with them. When he goes to meet them, they’re dead. I am trying to scrape up enough interest to care.

Meanwhile in South Dakota… wait, what? Oh gods why do we care about South Dakota? Ugh, unnecessary storyline the second – Terry and  Patrick continue their road trip. They also have flashbacks back to Iraq where they took drugs and drank in a prayer tower. Uh-huh. A local Iraqi arrives to complain – and the soldier they have on look out shoots him. A crowd arrives to grieve, and someone shoots at them from a rooftop. In the aftermath of the firefight, most of the grieving crowd has been shot.

They arrive at their squad-mates deserted house and find a hidden trap door into a basement. Which has, on one wall, an extremely disturbing collage of fire and black figures; oh and a man with a gun behind them

Andy and Jason are invited to a party by the corrupt judge – a party that involves them wearing hoods for the journey so they don’t know where they’re going. The blind folded three are taken on a littler walk by 3 women – who take them through the fairy portal. And into a club full of half naked people. And Andy meets up with Mirella, the fae he slept with waaaay back I have no idea when!

And Jason runs into Hadley, his cousin who tells him that they’re in a fairy safehouse – because the vampires are killing and draining everyone with fairy blood. He reveals Sookie is alive and Hadley is desperate for them both to join them before the vampires kill them like they did their parents. Which is news to Jason – before he can learn more, he and Andy are evicted and shot with fairy light

I’ve changed my mind, Salome is so definitely the head of the Sanguinistas, or at least high up in the ranks.

I am glad that Pam and Eric reconciled, it was beyond infuriating that a 100 year relationship was derailed by the super-special Sookie; even if he released her, at least she is acknowledged by him.

But most of all, let this be known as the episode when Sookie Got Told. *rewinds and watches again*