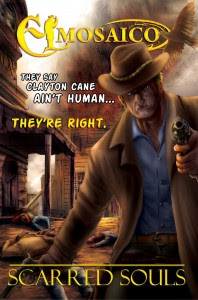 Clayton Cane was not born, he was created. During the American Civil War, in a plantation house a scientist used the darkest of arts to try and create a new source of soldiers for the beleaguered south by stitching together and animating the corpses of the fallen. He was destroyed before he could produce more than one – but Clayton Cane, with the memories of dozens, if not hundreds, of soldiers, was born.

He is now a bounty hunter. Reviled by most because of his heavily scarred appearance, he is exceptionally good at his job, hunting and killing people and monsters no matter what arcane arts they practice

But he is more than just a hunter and more than a monster, as we follow Caine through his adventures that take him across the United States and far beyond, there is definitely more man than monster to him. A man that can be moved by compassion, a man that won’t tolerate the victimisation of the innocent – and a man who is becoming tired of the trials of his life.

I really like Clayton Cane as a protagonist. His monstrosity of both creation and appearance often separates him from humanity. A separation that is only increased by his job – bounty hunter, killer for hire – and his extreme skill at it. And he is good at his job and works to be this cold hearted, ruthless gun-for-hire. Yet he is human, he has a heart of cold, a conscience and a powerful sense of compassion that constantly drives him to help those who deserve it. His ruthlessly efficient dispatching of the guilty instantly melts when facing the innocent. Together it not only creates an awesomely complex character but also a character with a lot of pain, especially in the later stories where Cane is, more clearly, feeling the burden of living the life he does.  Just by showing these conflicting sides and the constant rejection he faces, we have a far greater sense of his pain than we would have got from pages and pages of angsty whining.

The setting was also intriguing because it was so wide. We have the character and we have the time period – in the 19th century. But Cane can be called not only across the United States and Mexico, but to London and Egypt as well – he roams to follow his work ensuring a great diversity of settings

I have said it before and I’ll, no doubt, say it again – I don’t like short stories. I find they’re usually very badly rushed to cram everything in, contain info-dumping, have little character development and either needed to be part of a greater story or didn’t need to exist at all. Which is why I was quite pleased to read this book because all the short stories in it did it right. Each story carefully contained, there were no loose threads and they were clearly more than prologues for a greater series or novel. They didn’t contain any irrelevant information, they didn’t pad and they didn’t rush. They’re wonderful little stories and they all stand on their own – with stories like these I could grow to like the short story format.

The problem is that I am nearly sure that each of these stories did stand on their own in separate publications. In these separate books, they would have been excellent. But they don’t work nearly so well in one book.

Firstly there is a lot of recapping of Cane’s creation. Every short story has it, sometimes in a rather convoluted manner, and by the 5th story it’s starting to look a little ridiculous. The stories all had a similar structure as well: Cane is hired to face a threat. He does some minimal investigating (usually he’s pointed straight at the enemy), then he faces a horde of monsters – cultists, undead, jotun, whatever – then he wins. This isn’t a vague summary of one of these eight short stories, this is a summary of all of them. While there were certainly different elements to each story, I still felt vaguely like I was reading the same story 8 times. Even the writing in the fight scenes is very similar. The book just felt very repetitive.

We also had some repetition of powerful themes – the most common of which being the humanity of Cane compared to the monstrosity of the people he was facing. From the first story with Cane, Alligator men and Loup-Garou all being more human than the rich, racist plantation owner to Dead Man’s Band and Monster Men of Malachite Flats where Cane refuses to accept being a novelty to people who will offer him pretend respect in exchange for his service.  They’re excellent themes of humanity and judging based on appearance.

Similarly Red Blades in Whitechapel, Ghost Dances and Tomb of Kings say a lot about not trusting those in power just because they’re in power – and “civilised” authority doesn’t necessarily mean good or decent people. We have themes of heroism in Monster Men of Malachite Flats, Tarantula and Valiant Dead with both the cost and burden of it – as well as the rewards.

I love all of these themes and I think they are done excellently well conveying messages without being preachy and truly fleshing them out with some great characters. But, again, we have the repetition, the same message told repeatedly because these short stories were never intended to be together.

Inclusionwise, these short stories have 3 women in it – but 2 are capable, handle themselves better than any of the other side characters in a crisis. They are more than just weapons, having ties –or severed ties – to family that matter to them. They’re not perfect or amazing – they’re human and competent and they’re not damsels to protect. The third is a victim to protect – a pregnant Black woman giving birth who is being hunted, I did rather feel the protection and value of her applied as much or more to the child than she herself.

We have a number of POC who are dismissed with slurs and contempt of the time – but that is repeatedly challenged. The Arabic and Black “savages” in Tomb of Kings are far more informed and sensible than the white British lord. The Lakota man in Ghost Dance is far more human and morale than the brutal, evil cavalry trying to hunt him down. These are just some of many instances where were have the bigotry against POC – but the bigots are evil, cruel, savage and callous while the POC are good, human, honourable and kind.

There are no GBLT people in these stories.

In the end, I liked this book. It was interesting, had some great stories, a really intriguing protagonist, some excellent themes and was generally really well written, well paced and a whole lot of fun. But the repetitiveness means that towards the end of the book I was rapidly beginning to lose interest.

A copy of this book was provided by Netgalley
Posted by Sparky at 3:00 PM