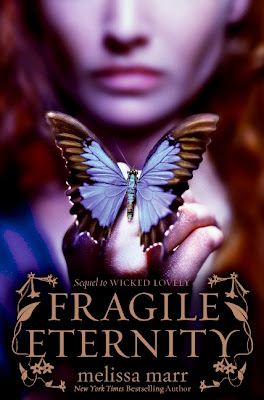 The fae courts stand on the cusp of conflict – conflict brought by Bananach, ancient faerie of war who longs for the courts to march against each other.

But her machinations are finding success not because of the fae’s bloodlust, but because of the conflicted emotions and jealousies of the fae rulers. Niall, holding grudges for Summer’s failure to protect Leslie is looking for an excuse to slaughter in revenge. Aislinn is torn by her love for Seth and her powers as Summer Queen drawing her towards Keenan, the Summer King. Keenan’s relationship with Donia, the Winter Queen is rocky and difficult – perhaps even impossible. And, again, he is drawn to his Queen and jealous and angry with Seth – who is best friends with Niall and gives him another excuse to strike against Summer.

As the emotions become more volatile, more and more foolish, rash actions follow, raising more tension between the courts and threatening Summer just as it should be resurgent. Desperate to be fae, Seth turns to the 4th court, the High Queen Sorcha and potentially drags them into the ensuing conflict as well with his new, powerful links to Sorcha and his long separation from Summer and the Dark Court.

This is a book that is all about character interaction. Which, to me, makes it a book that is very much down to personal taste. Personally, I am not generally a big fan of books that have lots of sitting around and talking and not a whole lot of things actually happening or people doing things.

I was left with some feelings of disconnect with some of the characters though, mainly because they felt so transformed from what they were for the sake of extra conflict. I didn’t expect Niall to be Keenan and Ailing’s biggest fan after Leslie (but the blame for that surely falls on Irial’s shoulders?) but the level of antipathy in this book is extreme. Similarly, the hostility from Donia seems to have reached unexpected heights. For that matter, the depth of the friendship between Seth and Nial (to such a degree that Seth is willing to overlook Niall’s treatment of Aislinn) seems to have suddenly peaked without a full foundation. This all cumulated by Sorcha, immortal, unchanging, unemotional, eternal Sorcha deciding to form her bond with Seth.

I feel that there has been a lot of tension raised between the courts to create the spectre of war but I don’t think there has been a great deal of basis for it. Or that the basis for it has come about rather rapidly – we’ve gone from a group of people who were generally friendly but with some issues to resolve, to three hostile armed camps.

It doesn’t help that we spend so long on everyone’s personal angst – Niall’s over Seth, Aislinn’s over Seth and Keenan, Seth’s over Aislinn, Donia over Keenan – it’s not a matter of being dull to read (though I can’t say I’m a big fan) but it feels like these vast forces are on the cusp of war because everyone’s too childish to deal with their emotions in an adult manner. Especially with Summer being so frivolous and impetuous, constantly walking the edge between impulsive action or temper tantrums.I want to grab them and tell them to grow up and act like the rulers they're supposed to be, they have too much relying on them to indulge in such over-dramatic emo-fits

It’s hard to say more about the book because this is primarily what it deals with. The emotional issues between the heads of the court and how it’s tearing them apart coupled with Seth’s quest to become a faery and Bananach’s plotting to bring conflict to the courts no matter what.There's few if any actual events, just lots and lots of pouting and stomping, sobbing and threating

But Seth’s own quest to find immortality to be with Aislinn forever (and I do not understand the rush on this. He’s in his early 20s at most, he doesn’t have to run into this) involves him making ridiculous decision after ridiculous decision – going off with Bannanach, going to faerie to meet a monarch he knows nothing about, going to faerie when everyone knows about the time difference who has done any study of fae legends, pledging himself to the High Queen and generally blundering about without thinking. It’s frustrating and I just don’t remember Seth being this foolish or this driven when he has no time constraints at all. Every fae tells Seth that it’s a bad idea – including all the fae who were originally mortal – but he doesn’t listen.

This book doesn’t improve on the previous book’s lack of racial inclusion. In terms of sexuality – there’s no overt inclusion. We have Niall who, in a past short story, was heavily implied to be bisexual (while making sure to emphasis opposite sex romance as his true passion).

Aislinn and Donia are as powerful as any in this book, as is Sorcha – probably more powerful than most. If anyone is presented as constantly being emotional and irrational it’s probably Keenan. However, Aislinn’s emotions are damaging her court and there’s a call out moment on Keenan for keeping secrets from Aislinn out of fear of what she’ll do. This is supposed to be a “how dare you Keenan” moment and I kind of want to get behind that… except his fears are legitimate. She probably would drag the court into a war with the High Court, she already launches a rather foolish demand at the Dark Court in between spilling her emotions in the lobby of Winter Court. I’m uncomfortable with the idea that I’m supposed to celebrate Aislinn’s battle for agency while, at the same time, I can see how poorly applied that agency is.

The world and setting of this book still has many of the things I love about the series. I love the wide world, I love the four courts, I love the fae creatures that have been pulled up from every corner of the mythology. But I was more frustrated by this book than I was amused by it. It saddens me that the maturity and the novelty of Wicked Lovely, when we had actual sense and reason governing how the fae would act has now been so badly broken. I wanted to slap the whole lot of them and tell them to get it together