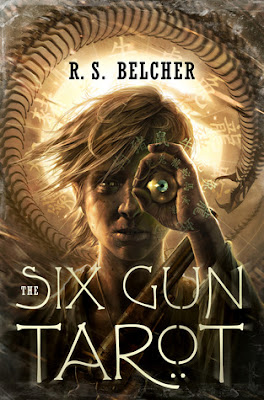 Summarising this book is a difficult task because there’s so much going on.

At the dawn of creation, god built the world on the bones of the defeated darkness. Step by step his angels drove it back, but there was one, the leader, the first, the source of the darkness that could not be stopped, could not be killed and instead had to be chained and buried in the Earth itself.

And now, those chains are loosening. The town of Golgotha in Nevada, a town that already attracts all things weird and bizarre, becomes the sight of the battle for the end of the world, a battle to keep the darkness chained. With powers from so many sources, under the eyes of the angel guardian and the best people Golgotha can throw against it - it's a diverse and powerful group, each with their own story and stake in the battle

This book is huge.

Not just in length – the world is vast and complicated with the story going back to the very creation of the universe, to a small town in Nevada where the strange and the unusual walk. There are a vast number of different powers and forces to incorporate into this small town, each of them having a massive effect of the overall story. The story itself is huge, with lots of different stories, lots of individual threads all coming together to form the whole.

And that’s told with a huge number of characters, each bringing more information, more world building, more angles and opinions and each being an essential part of the overall battle and progression. But each isn’t just a tool – they’re not just there for world building or to add their special powers or special resources or special insight – they’re all fully fledged, powerful characters in their own right. They all have histories, they all have links to other people, they all have their own wishes and desires – each of these many stories doesn’t just add to the whole, but they’re all deeply personal stories of the characters. They don’t just tell the story, they tell their stories.

The angel Biqa, at the dawn of creation conflicted and upset by God’s plan and his methods. Jim, the 15 year old boy running away from his past and that haunts him. Mutt, the Native American rejected by his people and facing resentment in the town. Maude, in an unhappy marriage for the sake of her daughter and trying to reconcile her current life with the teachings of her childhood that she intends to pass on. Mayor Harry, trying to reconcile his place as a pillar of the community and his Mormon faith with being gay and having found a man he loves. Augustus Shultz, still hurting and grieving from the death of his wife, caught between trying to hold onto her memory and finding love again. They all have their own, powerful stories to such a degree that I simply cannot pick out one protagonist because it’s all of their stories.

Even characters that are more referenced than having their own story told – like Sheriff Highfather- are still extremely rich characters with their own back stories, personalities and presence as full people in the book.

And the story itself is epic – not just a battle to face a force that can literally end the world, but the origin of it to pre-creation times, each character’s massive heroics in the face of it, their courage, their battles, their personal struggles, the ominous build up, the forces they try to bring together – it gives the whole book a grand crescendo feel. This is all helped by the writing that’s descriptive, but tight, that conveys emotion and feelings without excessive monologues, that gives us this full, glorious world without info dumping and that interspaces action and events with personal interaction and in perfect balance. It’s a beautifully written book.

This book is set back in the Old West in Nevada, just after the American civil war. Historical novels always make me cringe because they are often taken as an excuse to either erase marginalised people or treat POC, GBLT people and women extremely shoddily, often under the excuse of historical accuracy.

This book was one of the few that went a long way to do it right. It doesn’t rewrite history and pretend prejudice and bigotry didn’t exist – Mutt both has his demeaning name and is frequently racially attacked by other characters for being a Native American as are the Chinese members of the town. Maude is expected to be meek and mild and faces not just condescension but also violence from her domineering husband. Harry faces derision, contempt and the constant pressure to hide who he is.

But they’re all challenged. The outright racists like the doctor are challenged as the vile people they are. Prejudice against Mutt and the Chinese is time and again shown as ridiculous and wrong. We see Maude’s training which openly challenges the “chains of shame and guilt and fear forged by men and their gods”. We hear about the blood of Lillith and the first woman and first being who defined free will because she refused to submit to Adam or God, either one. Harry finds true love with another man that is precious while saying there is nowhere safe for them in the world.

It’s not all perfect by any means, Mutt needed a real name rather than the label people used to shame him, I’d have liked to see more than hints from Ch’eng Huang and Holly’s constantly deriding Harry for his lies is far too hollow – but it’s immensely better than most of what I’ve seen in Urban Fantasy in general, let alone a historical.

This book also ends with a team of heroes going to face off against the big bad. I’m hiding for spoilers so scroll over if you want to read, but this probably says a lot about the book’s inclusion

One is a Native American, a child of Coyote who takes on an Avatar of the darkness and shows it who the real power is

One is a woman, a child of Lillith, who challenges even god’s right to dictate to woman and mother earth who is probably the group’s most lethal fighter.

One is a gay man who, after years of shame and feeling like he was wrong and unworthy, puts on holy armour, raises a holy weapon and arms himself with holy artefacts after accepting himself and his love.

And the solution is provided by a Chinese philosopher who knows more about the nature of the enemy and how to defeat it than an actual angel.

I was surprised, to say the least.

To try and dredge up a complaint about this book, all I can say is it was long and had a lot of characters that were, maybe, not all needed. The problem is, I don’t know that I want any of them removed. Even relatively minor roles like Auggie, the shop keeper and the taxidermist both served to underline how odd Golgotha is and add more human texture to the townsfolk. Besides, it was a sweet little side story and I’d hate to be rid of it.

There’s a lot going on and you have to pay attention to all of it to see how it fits – but I love all of it, all the facets, all the many many characters, all their individual threads that all come together, their own stories, their own struggles and how they all add to the overall feel of the book – whether as heroes or texture or backstory or world building – it all adds, it all fits and it’s all immense fun to read.

A copy of this book was provided through Netgalley