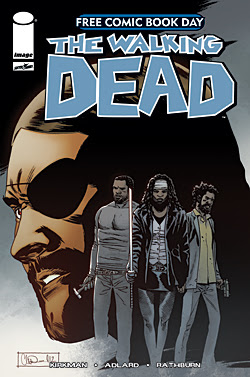 I think this comic - or, rather, 4 comics together - were both very good and very bad. And yes, I am that awkward.

From a storytelling style perspective, I wasn’t very impressed. Each comic consisted of someone monologuing. I have to say the justification of the monologues wasn’t terrible - Michonne and her loneliness, her need to connect causing her to speak aloud. Morgan trying to salve his own conscience and talk to Duane. The Governor almost gearing himself up to do what he thinks he has to. Tyrese... actually, even with a very sympathetic eye I can’t really think of a reason behind his monologue.
But they are monologues. And even the most justified monologue tends to be more than a little convoluted. There are just very few occasions - unless your character is laid back on a psychiatrist’s couch - where your character will talk about their history, life and emotions in such depth.

Now, from the perspective of a fan of the series, of someone who has read the comics and watched the show, of someone who likes these characters a lot and is fascinated in their story, this comic is excellent. Not much happens, but we see far more of the feeling and emotion behind these characters and what drives them - we have some history and depth behind the character actions in the comics. Some of them have been touched on already - but seeing them and hearing them in this context - the loneliness of Michonne and her need to remind herself that the zombies she’s bringing are not monsters, but were people, people she cared about once. Morgan’s final realisation that society is over, that it’s not coming back and it’s not going to be rebuilt - his grieving acceptance of a new world and reality while he moves on for his son. Tyrese and the fraught relationship he has with his daughter’s boyfriend (honestly, Tyrese’s storyline is pretty much pointless and doesn’t really add anything to the story or character development). Even the Governor and us seeing another step he took down the road that lead him from being a normal person to the monster he became.

They’re not long, they’re not in depth and they don’t add essential elements to the story - you could continue the story without ever reading these; but it’s a testament to the realness of the characters in this series that even without advancing the plot, I wanted to hear their story.

It’s also interesting that the characters followed and expanded on here are all POC. If I were being cynical I would say it’s because they needed more expansion - and that certainly would apply to the TV series, but the comics are considerably better at racial representation. The fact they are POC is a testament to the comics creating compelling non-White characters.
Do you need to read this comic to understand the Walking Dead? No. But after reading 100 or so issues of the series, you will want to.