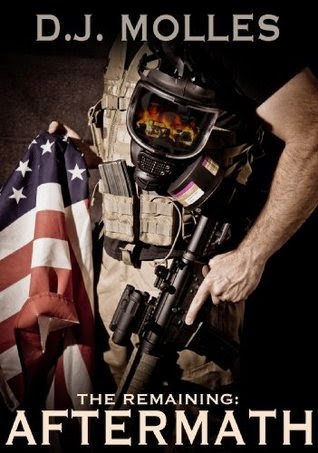 Lee has his mission to restore society and civilisation to the ruined US, destroyed by the RAGE plague turning people into ferocious, violent zombie-like beings. He’s made it to Camp Ryder but the survivors are wary. They’re surrounded by a rampaging gang that’s more than happy to destroy them and they don’t trust or have the supplies for outsiders

Lee has to prove his worth, prove his loyalty and show the camp he can help – but delivering the supplies that were stashed before society collapsed. At the same time, his mission continues – he’s not there for one group of survivors, but to try and re-establish civilisation itself. Unlike Camp Ryder, he can’t ignore other groups needing help.

This book is, in many ways, an action film in book form. That’s not necessarily a bad thing, I have to say at times I do like to turn off some of the higher thinking and watch things go boom. It can be fun, it can be a good way to relax. It is what it is, and if you like guns and bullets and action and well written, pretty exciting fight scenes with a Big Damn Hero protagonist, then this will work for you. If not? Not.

Personally, I’m kind of caught in the middle. Because I can appreciate a good action book, but this book is pretty simple and devoid of any real nuance. The bad guys? Are bad. Very bad. I don’t just mean Milo’s band of evil killers (who are just that, evil killers, rapists, sadistic torturers, psychopaths), but even people who oppose Lee in the camp as well. There’s a man who speaks against him early on and he’s seen as conniving, weak, lazy and generally unpleasant even by most of the people who we meet in the camp (unlike his mute and nameless supporters) and he doesn’t just question Lee but by the end of the book he’s almost comically unreasonable. There’s no chance of us seeing this guy as having a point or even understanding why he would be doing or saying what he did even if we disagree with him – he’s just wrong.

There’s a guy put into a terrible position and forced to do something awful in the vain hope of saving a loved one. Ah, nuance and understanding? Aw hell no, that man is weak and pathetic and needs chewing out pronto before redempdeath.

And the main character, Lee? Well, in the first book he was a soldier and special forces so we always expected him to be competent and capable. But we’ve gone beyond that – he’s a Hero. He’s tough and his strong and he’s awesome. It doesn’t matter how hurt he is, he will keep on fighting. It doesn’t matter how hungry, he will skip the meal because he’s just that tough. He will back people down with the power of his steely gaze, he will fight on with broken bones and torn ligaments, he will make plans based on him tearing up several of the enemy, because he’s just that awesome. And he’s good and kind when called for, and ruthless and brutal when it’s necessary because he’s a badass with a heart of gold. People who criticise him are wrong and mean or, at very least, misguided. He’s a leader and he doesn’t so much work as a team as order around minions who recognise his awesomeness (and are fairly irrelevant anyway because he’s so awesome. Their main role is to die around him so he can then be noble and sad and have the Guilts because he didn’t save them).

It’s not nuanced. It’s not subtle. The characterisation is very one note – but they’re very loud notes. The plot itself is travelling then fighting. Then some more travelling followed by fighting. Travel a bit more then lotsssss more fighting. Throw in some piety (personally I found the priest annoying and arrogant) and rather cheesy patriotism (you’re surrounded by man eating raging infected but you’re going to take time out to have a flag lowering ceremony?)

It’s not badly written and it’s not a boring read. It’s paced well, the action is written really well and it’s fairly exciting (we know Lee has plot armour, but the minions around him don’t). If you embrace it for what it is and like it then it’s a great fun read

And there are elements from the last book that continue – like Lee being on a mission. It does add to his Big Damn Heroness, but it is different for a dystopian to have characters who have a mission beyond “we need to survive!” It adds an interesting perspective and a drive for Lee not to just focus on survival and the very standard “I need to kill people to live, RAAAWR!”. But then, part of the way he avoids those moral quandaries that are so common in dystopians is by having “bad guys” that are pretty 1 dimensional.

Speaking of – one of the bad guys is mentally ill and unable, obviously, to get his medication. This could be an interesting, nuanced and tragic depiction of what happens to people who do depend on medication to treat chronic conditions when society collapses. Instead we have a guy who likes to stab things.

We have some POC, but the main characters are White (there’s about 5 main characters and they’re all White men) and one of the most noticeably so is squarely in the bad guy camp of sadistic torturing rapists. Like so many dystopians, LGBT people all got eaten early, it seems – none are among the survivors.

We have some women in fairly minor roles – Angela is pretty much a bit part compared to the last book. One of the most organised and practical people is a woman at the camp and I love how while the men are laying out lists of food, ammunition and medicine she pops in and adds warm winter clothing and contraception. She has a lot of potential despite her minor role

Angela and Lee also have an interesting dynamic that could be worth watching – he rescued her last book and she stays close to him because she is a stranger in the camp. She looks to him not so much for support but because she knows him. While Lee is confused because he doesn’t know if her attention is friendship, relying on the only person she knows – or whether she’s looking for more from him (which he also doesn’t seem all that keen on).

This book is well written, has some great action and is generally fun. But if you’re looking for complexity, nuance or a protagonist that won’t occasionally make you chuckle over the amounts of super-hero cheese dripping off him then this isn’t for you. If you want explosions and big damn heroes, it’s worth it.