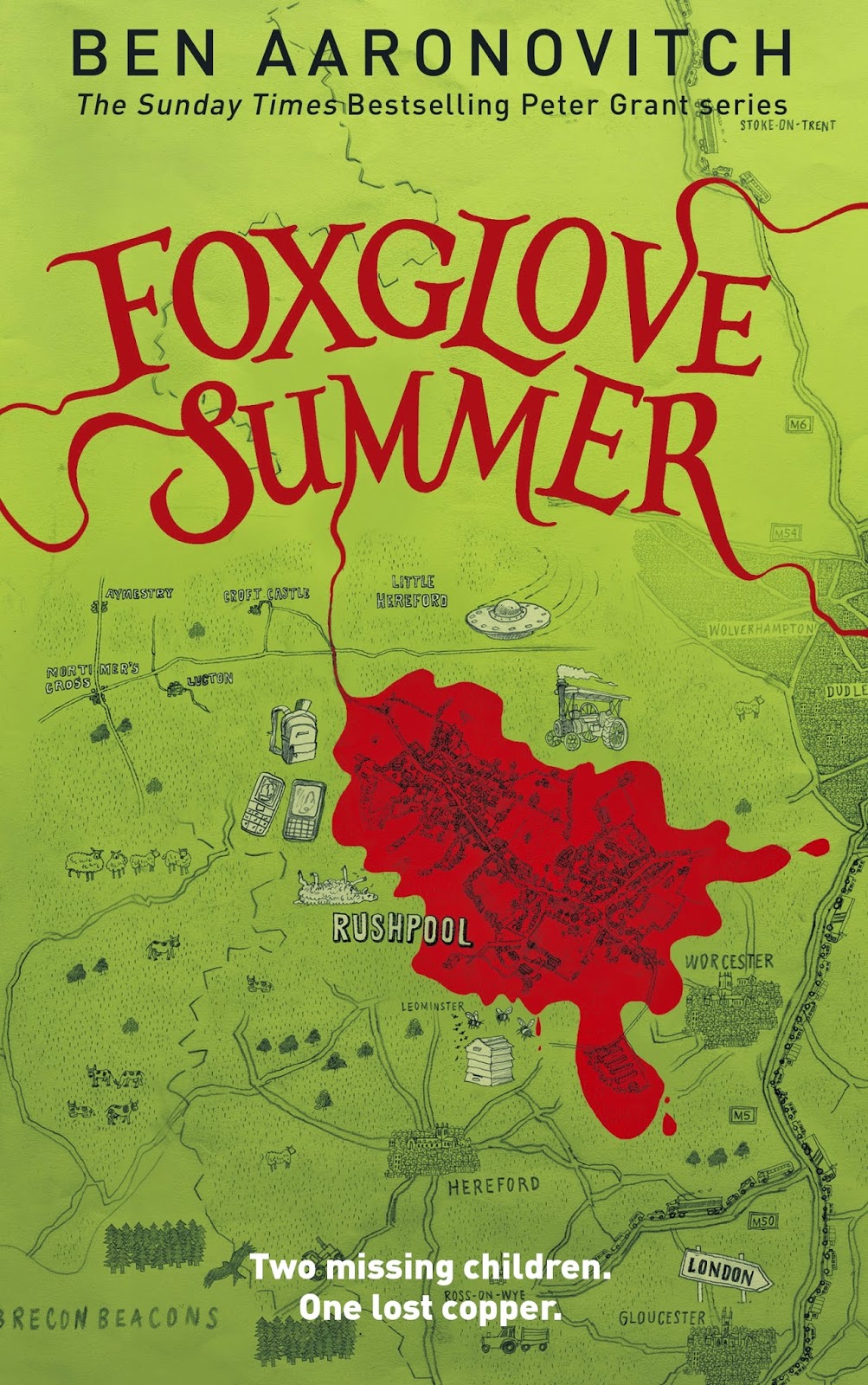 Peter faces something more daunting than anything he has encountered previously… the countryside.

The London cop is heading to rural Herefordshire on a missing children’s case – it’s not the Folly’s case but it’s always best to check on local supernaturals just be sure there isn’t any magical nefariousness with children. Usually it’s more mundane and this looked like another case

But as Peter stays around to help, more and more of the mystical is clearly involved; there is definitely something unnatural going on (beyond the foody pubs with the heritage sausages).

I love this series. I love the world setting with its quirkiness, it’s fun, the broad range of supernatural creatures and Peter happily trying to fit them all into police procedure. Yes we will have fae and ridiculous acronyms and proper police filing and budget concerns!

In some ways, this story is very slowly paced – because it closely follows a police investigation which is inherently slow. We have procedures and false leads and crossing t’s and dotting I’s and red herrings as well as the whole mystical research side of things and Peter being so completely off his patch. We don’t run from action to action –but it still really works because of the excellent writing, tone, world building and general sense of realism to the book. It’s not full of action after action – and it would feel wrong if it were. That’s not how police investigations work, it’s not how a missing kid investigation works and it’s not how Peter, the Follow et al work. Part of the glory of this book is that it’s an Urban Fantasy police story that doesn’t involve people running around with gunfights until the bad guy decides to conveniently kidnap the protagonist so no-one has to do any investigating or deal with actual investigative forces or officialdom except in the most tangential manner. This has a level of realism I can really feel - and because of that even small bit characters stand out as actual people (though it helps that each is given their own little quirks and originality).

Of course, it’s also not slow because it’s immensely amusing and extremely funny. I read most of this book with a big grin on my face.

I have always loved how every British this series is and this book is no exception. The tone, the snark – oh the glorious snark (the wonderful glorious snark) – the nice little asides and interactions and wry observations – it’s just so very British. The tone of the whole book just oozes Britishness in such authenticity that I don’t think I’ve ever seen in another book. I’ve never seen a series that had such a powerful sense of setting. It’s lots of little things, like hilarious little snarks about the Daily Mail (and their dreaded view of Europe, Asylum Seekers or anyone else), or how the police are actually quite eager to shift their cases to the Folly because then it’s not THEIR budgets they have to mine for resources.

There is also a glorious sense of irreverence and fun throughout the whole thing – which really works with the rather elegant infodumps that scatter this book. Some of it is based on the rich and fascinating world that has been described while others are from the deep and broad research that has gone into making this book and conveying a real sense of the police force with it. It could very easily have been dry and dull, but all of this fits Peter’s character – an eternally curious man who is given to wandering off and tangents while always keeping a wry, gently snarky view of the world.

That enquiring mind also brings a wonderful way of exploring magic – because Peter, child of the modern scientific world – doesn’t generally accept the rather romantic assumptions of his predecessors so has a good reason to analyse, quantify and explain magic to us. This all just works to create such an excellently presented world building – both our world, police procedures and anything else the reader isn’t familiar with, along with the fantasy world that has been wrapped around it. I think that’s the height of praise for the writing – with all the information presented it should be slow and info-dumpy, but it really isn’t because of the tone, the snark and the excellent point of view presented.

Also, Peter is wonderfully out of his depth in the countryside without being comically inept.

Peter is a Black man and that informs a lot of his character in nicely developed ways. Sometimes it’s referencing his mother’s culture and history in Sierra Leone. Sometimes it’s noting – sometimes with appreciation and sometimes with snark (and sometimes both) the conscious efforts people around him take to acknowledge diversity (or the appearance of it – there was a snarky note on being in the photos improving how the local police force’s diversity looked), to the microagressions he faces (Beverley wears a t-shirt with “I’m from here, stupid!” written on it. It’s a hot summer and Peter notices people expecting him to be used to the temperature). Even little things like including the race of people – including white people - he described around him. Part of that is some of the excellent way Peter is shown to be a policeman, but it also stands out from so many books where you will see lines like “a man and an Asian woman”, white is assumed to be the “default” race and therefore descriptions are unneeded. It all comes together to be an excellent commentary on inclusion nicely integrated into the story.

There is also a gay policeman, the first major LGBT character in the story. He isn’t stereotype, he’s capable and sensible and well integrated into the story as a full character with a relationship and character conflicts beyond homophobia or other “gay issues” (his boyfriend is a farmer, Dominic is not a rural person. Not even slightly). He’s overall an excellent supporting character for Peter, adding local knowledge and a nice amount of shock at the supernatural revelations (bonus points for “a wizard did it” being a rational explanation). If it have one teeny tiny eyebrow-raise over him it’s that, while we see Peter’s experience of micro-aggressions, Dominic manages to move through an unrealistically understanding world.

With Leslie out of this book except tangentially we’ve lost the female member of the Folly and a lot of potential with her. But Beverly is much more involved in Peter’s life and the investigation and, being a river goddess, she brings her own powerful levels of skill, knowledge and experience. What I especially like is that she very clearly has her own agendas and rules which she’s not always willing to share with Peter; his goals are not necessarily her goal. I like that a lot – too many books have side-characters (especially minority side characters) be little more than an extension of the main character. Beverly has her own agenda and isn’t afraid to push it, she has her own secrets and isn’t ashamed of keeping them. She also wants to have sex with Peter and isn’t afraid of pursuing that or being the instigator. I do hope we continue to see a lot of her, preferably more in future books (and/or the Folly finds another female officer).

The whole book just continues to be everything I’ve loved in this series, book after book it continues the same style, the same wonderful Britishness, the same snarkiness and a nice hefty dose of inclusion that just makes me look forward eagerly to each new book. And it contains shout outs to Terry Practhett! What’s not to love?