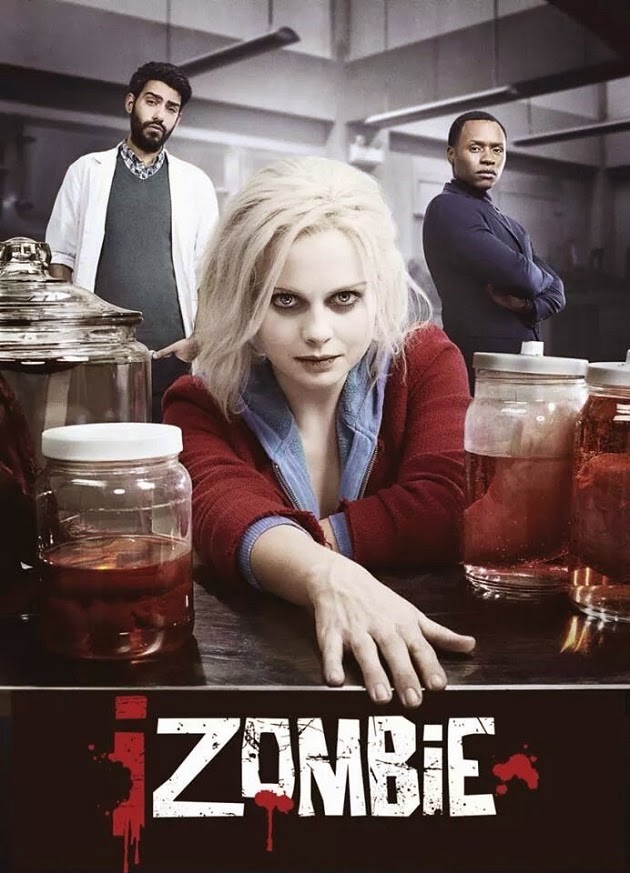 Introducing Olivia (Liv) awesome medical resident who just saves someone’s life and earns the snarky respect of fellow resident, Marcy and her really enthusiastic fiancé. The perfect night ends with a party on a boat

A boat that then burns while being attacked by zombies. Personally, I blame the fiancé, he said “what’s the worst that can happen?” He’s lucky Nazis with lasers riding velociraptors didn’t attack.

Liv wakes up in a body bag with a sudden hunger for brains. And the surprise of the EMT

Move forward 5 months and a much much paler Liv buys a whole lot of bronzer and Night of the Living Dead. And her mother, her little brother, her room mate, her now ex-fiance and others are staging an intervention over the whole dumping her fiancé, quitting her job and working in a morgue turn her life has taken. They think she has PTSD after the party gone wrong and she needs help

Liv opts for no. Though she admits she has change, and not just because she’s a zombie – she is also very very jaded.

To work, her chatty colleague (possibly boss) Dr. Ravi and a dead Jane Doe; he gives her a quick run down before being called out. We have a monologue about how she’s lost all her ambition drive and planning and is now hungry – as she prepares and eats some brains.  It manages not to be quite as disgusting as it sounds. But only because it sounds so very very disgusting. Except she’s not nearly as alone as she thinks – Ravi has been watching her and knows she’s a zombie

Thankfully he’s more curious than anything

He was the medical examiner for the party massacre she survived and after discovering she had removed a brain he started checking up on other autopsies she finished finding lots of missing brains. He’s rather hilariously amused, eager and generally excited about the zombie to examine while poor Liv tries to grasp his complete lack of fear, revulsion or even shock.

She recites her experience and adds why she needs brains – she tries to keep it to minimum but if she doesn’t eat brains she becomes less intelligent and more mean suggesting that a hungry Liv may be a zombie-apocalypse Liv. Also she likes hot sauce because her sense of taste is fried.

Curiosity is interrupted by police detective Clive who wants an ID on Jane Doe – Ravi has nothing but when Clive shows some handcuffs (non standard issue) found by the body, Liv has a memory flash of the victim’s and announces that the victim was arrested for shop lifting in Canada in 2008. Something Ravi confirms. Of course Clive would like an explanation for this – so Ravi goes with her being psychic which Clive, naturally, doesn’t believe

Her worried family have dragged Liv into helping run a haunted house despite her endless apathy. There’s also more pushing her at her ex-fiance, Major, but she’s avoiding him, refusing to give him “zombie”. But she goes have another vision flash – of a weather man, Johnny Frost, menacing the victim.

Ravi insists she tells Clive “you ate the girl’s temporal lobe, it’s the least you can do.” So off she goes where Clive I getting grilled by his boss (Liv has also developed a need to steal red things). But Clive isn’t a big fan of Liv at the moment because the name her vision led to is Lady Gaga’s real name. Oops. Jane Doe gave the name to the police when she was arrested. Following up with an accusation against the weatherman doesn’t help. He insists on dragging her along

And they strike gold, his instant, poorly concealed guilt and reaction to the “here’s Johnny” line from the vision is clear. He calls the woman Tatiana but he does have an excellent alibi but they do learn she’s a sex worker and she has a friend/co-worker called Tess

Back to the morgue where Liv reflects that being part of a horde would suck, she thinks she’s the only one and a late arriving Clive explains how awesome and deadly he’d be in a zombie apocalypse which isn’t very reassuring. Clive is fully on board with psychicness now so wants to keep dragging Liv along to the investigation to get more psychic flashes

And this mean seeing Tess, with some excellent snark between Liv and Clive and Liv surprising Tess and Clive by speaking Romanian (and skewering Tess’s mockery of American monoglots). Tess is devastated by Tatiana’s death but does give them information enough to find Tatiana’s very nice flat

Which has been ransacked. But while searching we learn that Tatiana was a kleptomaniac – and that, along with the ability to speak Romanian – has transferred over to Liv. She gets a vision of Tatiana dying – being thrown off the balcony by a man demanding his ring back. Seeing the death finally lights some passion and anger in Liv

Brief Ravi interlude (who is great fun) and him working to try and cure Liv. The possibility raises hope for Liv – which makes her reconsider keeping Major away from her. She debates getting back with Major while torn over getting back together only for a vague hope in some distant future. She finds major playing a computer game with a woman (killing zombies). I think the implication is that he’s clearly with someone else.

This leads to a whole lot of angst and another frustrated attempt by her room mate to try and get through to Liv.

Clive is being side-lined on the case by his lieutenant but Liv is back on the case all passionate and energised again and they put together some clues to realise Pratt, the detective who took over the case from Clive, is probably involved.

Cut to Pratt having tied up Tess and Monica (another sex-worker friend of Tatiana’s) and demanding his wedding ring back, along with a lot of misogynist rage against his wife.

Clive and Liv also arrive on the scene and we have a moment which may make me love this show forever. He tells her to stay in the car and she is bemused at the idea she’d do anything else. Clive chases Pratt through the house and he manages to escape down the scaffolding; Liv tries to block him in with her car so he can’t drive away and Pratt shoots her, pulls her body from the car and drives off

Clive sees Liv get shot. Of course, when he gets to body she’s gone. She’s clinging to the roof of Pratt’s car and causing it to crash. Pratt is unconscious and Liv… is a bit more zombie-y.

A very very hungry, zombie Liv who smells brains. She manages to get herself under control as Clive arrives and claim Pratt missed her. They go back to awesome snark (“how did you solve crime before me?”)

Back to Ravi who removes the bullet embedded in Liv and give her an awesome pep talk.

A newly enthused Liv goes to the haunted house as a zombie and with a new level of enthusiasm much to the happiness of her family. Her voice over explains her change of heart- the fact she a purpose, a new reason to live and a new way to help people

Of course as she sleeps she has another vision – of a victim apparently killed by a zombie.

Ok I kind of loved that on many levels.

I liked Liv. She has some excellent snark and she has a great balance of questioning and angst with sufficient self reflection to develop it. Her angst isn’t just sitting in a corner moping, it has a progression, it has reason and it has development. Yes it’s told through cheesy voice over, but it works it gives her angst purpose beyond empty character development. I like her

It also works with her friends and family, it would have been easy to make these frustrating elements, caricatures causing lots of chaos and problems and, yes there’s elements of that. But they care, they genuinely care and they’re trying even if they’re inept, even if they’re not helping, even if they don’t understand and even if they’re making things harder for Liv than they have to be. This in particular makes it an excellent parallel for disability – and not just parallel. As we saw, her 5 months of apathy were not an inherent part of zombieness but rather more “conventional” depression as her life has fallen apart after a deeply traumatic experience. They care, they want to help but aren’t necessarily achieving that which is very close to how family members of someone with mental illness do flail around often hindering more than harming despite caring.

Ravi is awesome and fun. Very fun. Great fun. I love him all ready. In fact I think Liv bounces really well off Ravi and Clive (and I’m glad that Clive was quick to join the team rather than be a long, drawn out, hostile element to work with) though I do hope we see something to counter Liv’s “how did you solve crime before me” snark (even if it was hilarious). His situation made him trusting her and being a little desperate natural and feed into his rapid acceptance of her abilities.

Of course, we also have to note that Ravi is south Asian, Clive Black and the briefly appearing Lieutenant who is Clive’s boss is east-Asian. This is a good beginning, I want to see where this develops

Can we have a poke at the idea that Major and a woman playing a computer game together means he’s moved on? Because men and women can actually be friends and play computer games without being romantically involved. We also had a whole lot of sex worker as victim but at the same time the sex workers were not demonised nor were they particularly reduced even if they weren’t developed.

I have to go back to Liv staying in the car, even if she still did get involved, I loved her quick acquiescence. No, it didn’t weaken her or make her seem helpless it was the very sensible actions of a CIVILIAN in dangerous police situation (yes, even if she didn’t stick to it). With legions of plucky amateurs leaping into dangerous shoot outs in this genre, I liked it. Yes she got into the action anyway but I liked that her initial reaction wasn’t “how very dare you tell me to stay in the car!?”

Of course, it’s not the White Trash Zombie series, (alas, very little is) but it’s pretty awesome besides