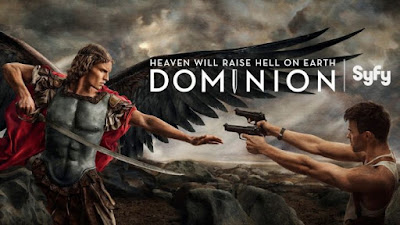 Michael puts on his best sad face while looking over the ruin of Vega after the amphora – when Gabriel tackles him. Michael is surprised his evil brother did something evil – but then sees the darkness in Gabriel’s eyes after Julian dropped amphora-ness inside them (see, decent health and safety laws would have mandated an “avoid contact with eyes” label on those amphora).

Alex tries to assure Gabriel that it’s black magic affecting him and they’re totally best buddies honest (except the war and abandoning him in New Delphi etc etc). Reason vs dark magic never goes well so the two archangels fight while yelling their family issues at each other.

This calls for a flashback to 2016 in Texas with Michael and Gabriel in a bar discussing their then newly disappeared daddy with Noma watching. Gabriel is especially bitter since Michael got his markings, Uriel got something… and he got the 7th seal. The seal of the apocalypse – which he wants to use to destroy humanity. He assumes, not entirely unreasonably, that god must want humanity to be wiped out, despite Michael clinging to Raphael’s prophecy of a chosen one – though Gabriel thinks Raphael has a poor record with prophecies. He breaks the seal – and the apocalypse invasion of 8 Balls begins, causing mass death and destruction.

Gabriel appeals to Michael to help him, but Michael angrily rejects him (leaving Gabriel looking lost) and goes looking for the Chosen One. Noma, surprisingly, follows Gabriel and his plan to kill Alex to bring Michael back to Gabriel’s side.

Back in the present, Michael and Gabriel continue to fight and debate – Michael deciding giving Gabriel the 7th seal was actually a test (I don’t buy it, nor does Gabriel). Gabriel wins the fight and keeps beating Michael to whine about his brother abandoning him and leaving him to run the apocalypse on his own (his need to rant stops him killing Michael quickly). But Michael blames someone else for breaking their father – Lucifer (who chose humanity long before Michael did). He tells Gabriel that Lucifer is still alive – which is apparently news, since the other 4 Archangels supposedly killed him.

Since Lucifer is more powerful than either of them, Michael appeals to Gabriel that he needs him. Gabriel agrees – but he doesn’t believe Michael, so he’s going to drag him to Mallory to confirm it for himself.

Noma and Alex are looking or Claire in the devastated Vega, though Noma is still reeling from the renewed loss of her wings.

Claire’s arm is injured but she isn’t dead, she wakes up surrounded by corpses and a very broken Arika. Arika tells Claire what happened to her in her vision – everything they did to Rose being done to her. Claire tells Arika about her own broken dream. Arika begs Claire to trust her and together they go looking for Alex.

They meet up with Noma and Alex and hear the sound of Julian’s huge army of 8 Balls invading Vega. Thankfully sound carries well because they are a very very long way away. They have an hour before they reach the city. The plan is for Alex and Noma to hold the wall with whatever traumatised survivors they can scrape up while Claire and Arika use the top-secret codes in the war room to get the wall cannons back online. This does mean trusting Arika some more but I guess they have no choice. They actually take time out in this invasion for Claire to angst about her lost daughter. Noma interrupts this to point out ultimate destruction is on the way.

Arika tries to leave, she wants to go home to Helena – but Claire argues with her to stay, that she’s needed. She asks Arika to stay – she says she won’t force her. Arika leaves. The fact she’s a criminal kind of forgotten.

Alex and Noma manage to find some people and arm them to hold the wall, with Alex using a big damn speech while Noma rather thinks they’re all going to die but that’s ok because she loves Alex.

William comes out of his own vision and manages to save a woman before she commits suicide. William has decided that Vega must die – and then seems to kill the woman he just saved. He goes hunting Claire.

David has found the booze and the last living person in the command centre who isn’t doing so well. Being David he’s kind of recovered from this better than most because he’s either that self-assured or he’s just been shattered so many times that one more crack doesn’t make much difference.

Claire gets to the war room only to find David inside with the door locked. She tries to appeal to him in the name of the city – and he lets her in. She also makes it really clear she’s still not his fan by holding a gun to his head, not being all that joyful with the man who caused her miscarriage. She does rather unthinkingly ask him if he knows what it’s like to lose a child – to which he points out yes, he’s lost three. He falls to his knees in grief and remorse and Claire decides he is “not worth it” to kill.

In between the angst Claire notices the 8 Ball army has found a tunnel outside the walls that leads into Vega, bypassing the defences. They grab the conveniently surviving Com’s officer to tell him to get the guns up. Poor Jerry is way above his comfort zone but Claire leaves David to inspire him to work. David is very good at working people. He gets the cannons online and they can enjoy an app game of slaughtering 8 balls.

Which goes well until William arrives and shoots Jerry. William if you’re going to shoot people on games night you could at least bring snacks. He rants his general problems and despair of humanity – he wants all of Vega to die to save them all. He wants to open the gates – and David hits him with a pipe to try and stop him – but too late. They fight to close the gates but William breaks the controls. David hugs him, tearfully begs for forgiveness – and shoots his son, repeatedly.

Claire goes to join Alex and Noma to warn them about the tunnel and fight alongside him (and so Noma can tell Claire she loves Alex and beg Claire to do whatever it takes to keep previous Alex safe). Alex and Claire rub some salt in the wounds by talking about their romantic dreams.

Arika goes to the prison to find Daria, but she’s run off only leaving Dr. Eli (another Helena resident). They head home – but on the way they find a little girl and Eli parrots the “Helena is all that matters” party line to abandon her, which Arika no longer supports.

At the front line the guards led by Claire and Alex are running out of ammo – and Alex walks out to meet the 8 balls.

Ok new revelation – Gabriel was given the 7th seal. Suddenly his whole purging of humanity seems a lot more understandable – god goes away and leaves Gabriel (who has obvious issues with humanity) the keys to the apocalypse. Gabriel’s assumptions are not unreasonable here and it doesn’t exactly conflict with any prophecy (though it is interesting now that the prophecy is connected directly to Raphael and not just randomly from god – I would like to see Raphael tell us more about this).

The idea that giving Gabriel the seal was a test is also bizarre – shouldn’t god have intervened just before the break to say “failure!” rather than allow the world to fall into utter ruin to… what? Keep testing Gabriel until he changes his mind? Can we add to this Michael himself saying that Lucifer chose humanity first long before Michael did – suggesting Lucifer was cast out for siding with humans. With that nugget of knowledge it, again, seems to make Gabriel’s position much more in line with god’s will.

Can I just put it on record now that sparing David and Airka – even though both characters have had incredible trials by fire and the actors have pulled out all the stops in portraying how truly hurting and broken they both are – is such a very very very bad idea. At the same time I think both of their character arcs are by far and away the most interesting thing on this show. Their fall, their breaking, their seeking redemption, their complex relationships with the cities they rule the possibility that they actually believe they’re working for the greater good – these are the best of this show. Of course, part of this also down to them being amazing actors