Time After Time, Season 1, Episode 3: I Will Catch You 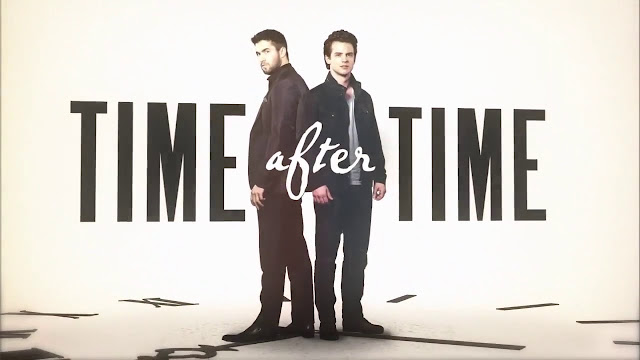 Ok, Jack the Ripper is terrible. Serial killers are awful. I feel nothing but hatred and loathing towards him. Nothing at all. Not…

We open with the Jack the Ripper wearing nothing but a towel?!

Damn it, Time After Time your eye candy is destroying my conscience

And he can really wear a suit as well.

In case we thought he went soft last episode, he has just murdered two people so he can steal their house and clothes and electrical appliances. So he’s still murdering and still wants the time machine so he can zip around time finding new and fun places and times to stab people in

So he contacts HG via Jane and demands the time machine – giving him a deadline of 12 hours before he kills again.

That interrupts HG and Jane’s flirting (which is actually kind of painful to watch) and sets HG into a tizzy. He has a plan to repair the time machine and then change the key to make it into a trap for Jack the Ripper so he can’t run around causing havoc

To help with that he has a new assistant Martin Scott who is also cute and a complete HG Wells fanboy – and how many people know about HG Wells and his time machine?

Which means meeting Paul, a gemmologist friend and ex of Jane so they can have more flirting (really this guy’s flirting is so over the top heavy that even if he is hot he needs a restraining order and possible a tasing. I mean he does kind of say to Jane that he’ll stop flirting if she wants – but note the subtext only if she’s taken not because she’s there professionally and needs him to tone it down a notch or 10) and more “development” (if we can call something this dull and inevitable) of Jane and HG’s relationship. And maybe a comment on her exposition last episode about how bad she is at relationships

But, side quest, we have the guy who was stalking HG last episode – his name is Chad and…

…wait, Chad? Really, Time After Time, you cannot convince me of any sinister bad guy who is called “Chad”. Chad is the least sinister name there has ever been. Ever.

Anyway Chad goes to his apparently confused mother who he’s not allowed to be in touch with judging by the way they’re dodging around her carer. They know about HG Wells and Jack the Ripper and are desperate to stop him going back for some ominous reason

This involves him trying to hunt down HG with a gun (that’ll stop him, being shot) and only being stopped because Doug (seriously, Time after Time, your names need work! Chad and Doug having a gun fight! Oh we also get a bit of back story about Doug but not quite why he’s into the big secret or didn’t think his boss was out of her mind), Vanessa’s in-the-know guard

HG wells now has all the bits needed to repair his time machine – but is perturbed because Jack the Ripper does not try to get in touch before his deadline.

What does happen is their experimentation concerns Griffin, Vanessa’s partner (my bad, terribad assumptions, they’re not married. But he’s running for Senator in the US without being married and living in SIIIIIN! which is… surprising). He wants to know what Vanessa is hiding from him so she decides to tell him the truth

And he is duly horrified that she has lost her ever loving mind and is being taken for a ride by a con man trying to convince her he’s HG Well. She asks him to trust her which is… really unreasonable, to be honest.

Thankfully with the time machine working again it’s easy to give Griffin a demonstration to add him to the ever growing vast list of people who know all about time travel.

Except he already knew! And yes he tells some unknown person he now has access to the time machine. Ok is there actually anyone in the world who doesn’t know about the time machine? Is Paul the only one?

So why did Jack the Ripper miss his deadline? Well he met a woman called Brooke in a purely chance encounter – and there’s an assumption this will be his victim. Except she’s a Neuropathologist and does an excellent job of poking his ego (both as a surgeon and a serial killer) in all the right ways, accurately summing up his god complex and generally pushing all his buttons.

They go home together, have sex and he looks like he’s genuinely taken with her. She’s really good at pushing his buttons. He still plans to kill her – until she injects him with a drug that knocks him out. She knows who he is (yes, it’s another person who knows all about time travel! There was definitely an announcement) and was waiting for him to get with the stabby stabby so she could inject him.

He wakes up, almost naked on a table held down by leather straps (again, bad Time After Time your eye candy breaks my moral compass).

This show forces me to examine my shallowness in a terrible way. I look in the mirror and say, yes, yes I am someone who will overlook the fact someone is a serial killer if he looks really good naked in leather restraints. I’m sure this says terrible things about me

Aside from the eye candy this show has flaws– I have to say I’m not finding Jane appealing – I find her whole persona kind of bland and we’ve yet to see any real talent she adds to HG’s life beyond love interest. And yes, she was wonderfully invested in her own rescue last episode but I kind of see her as being put in the love interest/damsel box and find their relationship dull. And HG talking about the ramifications of time travel (an important topic) only to have her decide to counter thoughtful philosophy with sappiness about fate (with a not-subtle, meant to bring us together undertone) without rolling my eyes

Contrast that with Brooke and Jack the Ripper – or John to use his name. None of this awkward teenage-style (seriously why are HG and Jane so young?! He just discussed in this episode that he was married, this amount of blushing-foot-staring is very high school) stammering around – but two sexual adults going for it with murdery undertones.

I also think they’re doing a pretty poor job of depicting 2 men out of time. We had odd moments but generally both of them – especially John – function very well in the 21st century. And that’s kind of a missed opportunity for making Jane actually pointful – contrast to Abbie and Ichabod in early Sleepy Hollow.

I’m actually kind of glad that we had Chad and Griffin and Brooke because both show separate forces involved that may be more interesting by far than just HG and John flailing around. Especially since at some point someone’s going to remember 21st century forensic technology, CCTV et al and John’s murder rampage will be very abruptly cut short. These factions – and I love that it’s factions plural (even without counting Vanessa) – so we have multiple agendas and schemes… which we need because beyond those HG vs John is a little bland.

Weirdly, the central characters – HG, Jane and even John – are the least interesting on this show, but someone on the writing team has realised this so has a) thrown in lots of intriguing plot points and b) decided John needs to be naked regularly