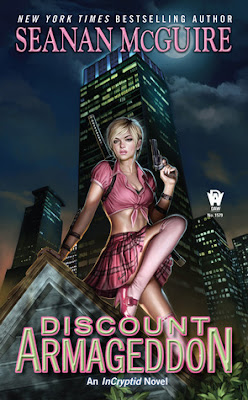 Verity Price’s family is not like many others. She grew up dodging her sister’s habit of booby-traps and ambushes and dealing with her grandmother’s regular visits into hell to find her grandfather. Oh and her cousin isn’t human.

Her family has worked with monsters, protected humanity from them – protected them from humanity – and generally tried to keep things in balance. Unlike the Covenant of St George which is determined to kill anything they don’t consider human or right.

So when one arrives in town, completely derailing her dancing dreams, Verity is not happy.

Some books just make me smile. I just read them with a big silly grin on my faced because they’re so much fun and I’m enjoying them throughout and I get all kind of sad when it ends.

But this is the first book of an entire series so I have so many more fun books to charge through which I’m really looking forward to: book one has definitely got me hooked in here.

The world is fascinating – not because it’s supernatural beings in a modern world (there are no shortages of those these days), but the way they’re integrated is fascinating. Not by being open and revealed and being part of the human political world (which they’re not), but by having them part of the greater global ecosystem. After all, we have these worlds where the supernatural is part of the world, then why wouldn’t they be part of the food chain, part of the environmental structure, part of the general mess of myriad interactions that all creatures in nature go through?

I love how this is explored. And I love how it is examined in far more detail than simply “are these evil”. A creature that hunts humanity is not just inherently condemned by Verity and her family – after all in a world where the supernatural exists “endangered big predator” or “giant lethal monster” are pretty much synonymous.

There’s also real ecological considerations – which affects humanity as well. If you wipe out a species that normally changes an ecosystem drastically. I really love how the whole concept of supernatural beings is addressed by in a very scientific, naturalist way which is truly excellent.

I like this because it adds complexity to the equally presented argument that some cryptids - especially intelligent cryptids – are utterly harmless even beneficial to their neighbourhoods but which are hunted by the Covenant. It would have easy, simple and simplistic to have Verity and the Price family be noble beings killing bad monsters while the Covenant are just genocidal judgemental arseholes slaughtering anything they consider ungodly. And sure, there’s a part of that but there’s a nice expanded complexity as well – not everything Verity and her family saves are harmless or not aggressive, but that doesn’t mean it should be removed

Throw into that some really genuinely hilarious touches – the battle of the gorgon and her hair, the Waheela’s amazing goth outfit and, my utter favourite, the very religious Aislinn Mice who I love beyond all reason and should be included in every book. Forever. You’ve got a deadly serious thriller? Needs Aislinn mice. Agatha Christie remake? Poirot needs Aislinn mice. Dystopian sci-fi on an alien world? Aislinn mice. They’ll improve everything.

On top of the excellent world and concept we have Verity and her family, the Prices. And they’re a lot of fun (I love the little quotes from her relatives at the beginning of each chapter). I like that she actually has a conflict between what she wants to do with her life (competitive ballroom dance) and the family business. For many characters this would mean a great deal of angst and wailing and moping because it’s sooooo unfair. But Verity accepts it as part of her reality and works with it as best as she can – she pursues her dreams while maintaining her family cryptozoology, she acknowledges the pressure from her family while both understanding it and not resenting it. It’s all very mature and sensible and fun – with strong family ties while still having a conflict which is reasonable, meaningful and lacking in unnecessary melodrama. And she’s passionate about ballroom dancing – that’s definitely unique and different! The balance between enough information to make it clear this is an authentic interest of hers while not including too much so people who don’t care about dancing aren’t bored rigid is perfectly hit.

On top of that Verity is fun, sexually positive (happy to have fun without sexual shaming), she’s intelligent, active, pro-active and actually has good relationships with the women around her even if she has no real friends (female or otherwise). There is a “mean girl” but she is developed way past that which is always excellent to see

I’m not overly thrilled with Dominic. His progression as a member of the Covenant is interesting and nicely paced. But alongside everything else in the book, the world building, the fun of Verity, her family and the plot I felt he was the least interesting part of everything

Oh and the plot? Action packed, well paced and an excellent balance between character development, world building, Verity and the Aislinn Mice. There’s not a boring moment, there’s not a rushed moment- it’s excellently balanced.

In terms of diversity, we do have a number of side POC characters (I say “side” but the only non-side characters really are Verity and Dominic himself, so it’s not a comment on them being minor or sidelined). We have an Inuit waitress who works with Verity (a Waheela, and yes this book does draw on a lot of legends I’ve never heard of before), an Indian family of Madhura (which also made the excellent point of ethnicity and nationality) and she works along side and Asian security guard (a tanuki). Her co-workers also have some

There is a gay character mentioned. But he’s literally only mentioned, he never actually appears (a Maris!)

This story has me. The only thing that annoys me is that it has taken me this long to find this series and now I’ve found it I’m going to obsessively read it all. The world, the characters, the story, the balance of world building and plot – everything just hits that sweet spot all with a whole lot of originality that makes this a definite winner.