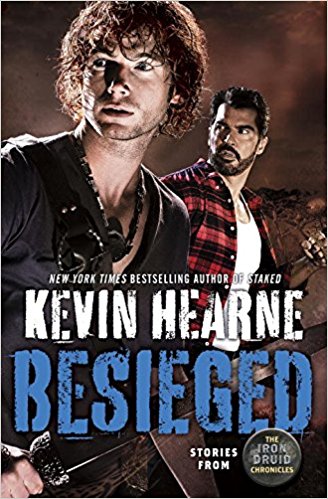 This collection of short stories works well for this series. Atticus is, after all, 2,000+ year old character - and, rightly, a lot of that doesn’t come up in his main storyline. It’s alluded to in many artful asides and in fun moments like his stories to Oberon - but we don’t dive too far back because 2 millennia of backstory can be a lot.

But his character is covered in markers from these 2 thousand years of experience, little moments that really give colour and texture to the character and make those 2,000 years believable despite his very young demeanour.

So we have many of the stories of this book that delve back into his past - and through the already excellent established medium of the stories he tells Oberon and Granuaile (frequently forcing him to spill various points of his history).

So Eye of Horus tells us of his history in Egypt (and the source of his legendary animosity with Bast) in a fun little irreverent heist drama. It has a nice amount of research - which is always a nice element of this series that all this history and mythology comes with some real work on this. I also like looking back on Atticus’s own difficulty in fleeing Ireland and the Romans with his very prominent druidic tattoos; in some ways I don’t even think of Atticus’s tattoos and what that would mean in historical contexts where most people are not tattooing pretty much anything on any part of themselves. What I didn’t like was the Egyptian gods which seemed simplistic and not all that powerful and divine.

Goddess at the Crossroads however seems to be more name dropping Shakespeare (which Atticus has a thing about) but it is trying to address Atticus’s attitude towards witches. This has been a problem of the series for a while since early in the series which always felt excessively demonising of witches who in turn were largely female. It did not feel good: but since then the series has been trying to a) present this as Atticus’s actual prejudice based on past experience but not necessarily fair to universally present as Atticus does, b) present us with good witches. This is part of Atticus’s bad history but contains a lot of notes of how his own experience is skewing this and Notallwitches.

Demon Barber of Wheat Street kind of repeats but expands a little upon a short story from Carniepunk but the expansion is useful to add context to the rest of the book and the series in general: basically why druids are not fans of demons (nothing to do with religion and everything to do with how they tend to drain and despoil the Earth which is the Ultimate No for druids). Which in turn leads nicely to Gold Dust Druid which gives us another excellent snippet of his druid life, what he was doing at various points of history and how he negotiated the issues of the time, some nice reinforcement of why demons are bad and what Druids actually do (including the fact that, as the only druid in the world, he was pretty much on call to any elemental who had an issue).

And I like that this is being raised. Throughout the main series we’ve had a completely different focus: We had Aengus Og, then we had Thor and then we had Loki. A lot of this has been about survival and trying to make up for the previous past decisions. But very little of this has been about what druids actually do; which is a shame because it would be interesting to explore that, especially with the rising of druidry again and Atticus moving a little away from survival at all cost towards the actual principles of druidy again. This book does a great job of reintroducing this.

So from Atticus’s history we also have Owen’s own take on both morality and the future of druidry and his own influence on Atticus beginning excellently with the Bogeyman of Bora Bog. A foundation moment of Owen’s life which he in turn passed on to Atticus. After underscoring the priorities of Gaia and druidry, we’re also reminded how little the Earth actually gives a shit about, y’know, individual lives. Because she’s Gaia, the Earth and very big picture which is why druids can’t use Gaia as the one and only guide for morality (which actually follows on nicely from some comments Atticus made about how utterly dangerous and ruthless the Tuatha de Danaan are. Albeit with Morrigan officially saying Fuck This to the crimes in question and double fuck this to druids who let it go). With an added bonus note that, environmental issues aside, druids aren’t perfect.

And from those lessons learned we have Haunted Devils with Owen raising the next generation of druids - a multi-ethnic, multi-national, multi-lingual collection of kids who are all developing their own personalities and experiences as they fulfill their roles as druids (even if Owen is not used to being on call from elementals simply because back in his day there wasn’t the need); we have both their wonder, the moral lessons Owen imparts, and a level of respect between Owen and Atticus (I love the complexity of Owen both still feeling vaguely parental towards Atticus while also feeling almost in awe of what Atticus has become). While Blood Pudding does an excellent job of not only showing Granuaile following her own path but also, when she does face conflict or difficulty, she handles it herself and doesn’t return to Atticus looking for help. I think this really centres how Granuaile has become her own person now: these last stories centre the future of druidry even as Owen shows the origins and Atticus’s shows how he’s managed to keep things going - or not.

And this is why this book works - because the general theme of each short story moves into each one to tell a much broader story which in term works really well to develop and grow the world and the themes. This whole book adds a lot of context and depth to the Iron Druid series and is a really excellent addition to the greater whole.

Bum note - besides Goddess at Crossroads is Cuddle Dungeon. It’s not that it was a bad story - it had some excellent notes about consent that Perun made stick. I also loved how it fought back against the idea that Perun is comic relief. What I didn’t like is that it was told from Perun’s point of view and still in his broken English… I can’t imagine Perun THINKS like that, especially since we’ve already established that he is a sensible, intelligent and even erudite man when conversing in his native Russian. I mean, it was a good story but the more unified theme of this book made it feel out of place.