Jot of Blood, (The Coventry Years #1) by Katherine Bayless 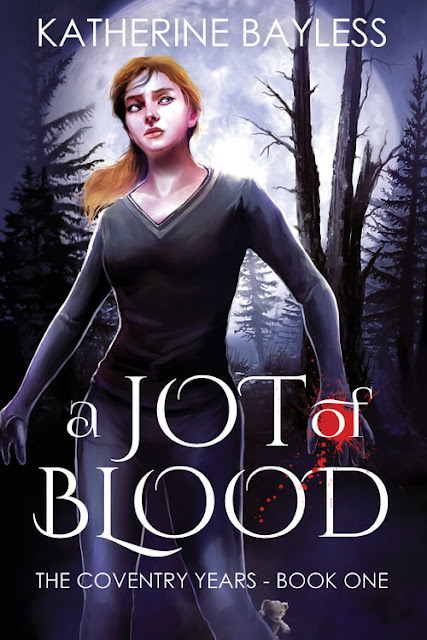 Lire is returning to school and she’s not looking forward to it. As a clairvoyant she’s resigned to being an outcast - even her teachers are wary of their secrets being accidentally read through Lire’s skin.

But this school year not only brings some excellent friends - Cal the werewolf and Zach the Hidden, but no shortage of adventure as well: with murders, missing werewolves, and considerable attention from some of the most important people in the magical world.

It’s time for Lire to leave her shell

This is the book I never asked for but turned out to want anyway.

I love this series, I like the characters, the world is awesome and I can’t wait for Lire’s story to continue after the events of the last book.

So hearing there was a new book starring Lire and set in this world and I’m doing my happy dance and all ready to sign up. Then I hear it’s a YA story of Lire in her school days. And I want to pout in a corner because I didn’t ask for this - who asked for this - bring back Adult Lire on whom the fate of the world rests who has gone through lots of epic shenanigans.

I pouted, I sulked, I opened it up grimly ready to snark or be passive aggressive. But I liked it a lot.

Hey, a magic school where people learn stuff! Every other magical school I’ve read produces a population of young sorcerers who are experts in divination and potion making but cannot read or master basic arithmetic. But Lire’s school teaches foreign languages and English and maths, y’know actual subjects. I give so many points for a magical school that actually teaches!

I love the exploration of the different magical systems and curses, how this occasionally results in the school being divided and the accommodations that have to be made for people with different magical gifts. I really like the Hidden - the magic around the Invisible Men - is a nice unique element.

There’s also an interesting insight into how teachers treat pupils, how they bully their students - not through the very obvious. There’s some comparisons to disability discrimination and I don’t generally like - comparing marginalised people to actual super-powered people - but it’s an well done comparison of when people need accommodations. The problem of singling people out, of drawing attention to their needs in front of the whole class, giving accommodations you assume the people want without actually consulting them - and not asking what they actually need.

One of the reasons this works is that even while Lire and Zachary do have considerable magical powers, those powers come with severe drawbacks as well. Lire’s inability to touch anything comes with strict dietary requirements, special clothing and a constant awareness. Similarly, Zach being completely invisible leads to different ways he is regarded by others to say nothing of the difficulty of not having people sit on him. The parallels of disability are not inaccurate.

The story itself is very personal to Lire and I’m generally not a great fan of character driven high school stories. Not a judgement of those stories, just not my thing. But the connection to her powers, the wider world and hints of things to come all add a series of plot lines; including lots of nice action, investigation, foreshadowing and other fun things all while making Lire very much her age and experience. I like how we have the broad world, the meta-plot, the murder investigation, the characters and Lire’s own high school struggles. The balance is really well done, I love it.

I am a little dubious at the sheer number of very important people decide they need to be involved in high school student disputes. However there’s a definite hint that More Things Are Involved than high school politics.

The book is not diverse. There are several women - but I can’t say any character other than Zach and Cal are actually close to Lire and there are two women (Amber and one of the teachers) who are Designated Bad People. Similarly we have few meaningful POC: Deidra is Asian but appears very late on, we have a latino vampire and that pretty much sums his character up in his entirety. There’s an Asian truthsayer who is a nice character - but only briefly appearing. There are no LGBTQ characters

I still want book four in the Clairvoyant’s Complicated Life series. I want that very very badly. But, not having that, The Coventry Years is a wonderful addition to this world and Lire’s history, her old friends, her old contacts and some of the shape of the world. It was fun, it was a great insight into a fascinating world. I liked it a lot

And now we can have book four in the Clairvoyant’s Complicated Life series.