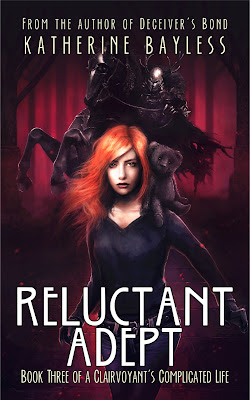 Lire has changed a lot over the last two books – she’s come a long way from the Clairvoyant who helped in police cases. Now as Earth’s only Adept – one of only two known – she is in high demand. And many forces, especially factions of the fae, are desperate to control her

But behind that is the looming threat of the demonic invasion – and who else can unite the disparate forces to face off this threat?

When I first started this book I had a horrible moment of confusion – because I had no idea what was going on. We had vampires and witches and psychics and magic and djinn and two factions of fae and a demon invasion. In the middle of all this is Lire, a Clairvoyant with a collection of new psychic powers she can barely control who also has an essential and deeply rare ability that is not only generally in high demand but will be essential when facing the demonic invasion and is valued by the fae as utterly necessary for their civilisation to continue.

That’s a lot to swallow – but within a few pages it all came flooding back and I remembered how huge and wonderful this world was, how much fun the characters are and how layered and interesting the plot line was. And very quickly paced – this book hit the ground running. There was no standalone stuffing, you cannot pick up this book without having read the previous two books first – because the plot begins straight away and we dive in to this world with a full expectation of the reader to know what’s happening. And I love it. No padding, no fluff, no unnecessary explanations – we get into the plot and the meat.

The plot is complex and involved with Lire doing a lot of growth while also fiercely staying true to herself. Learning as she goes, dealing with a lot of very different characters from different factions all with their own full agendas – and none of them (ok, maybe the demons) can just be condemned as pure evil for the sake of it.

This book also did an amazing thing – it took so many of the issues I had with the last book and did amazing things with them.

And pretty early on in this book we see a whole lot of woo-woo behind it. And while other books would look at this as wonderfully romantic here we have Lire pretty much laying down the law of how not ok this is and reversing it as fast as she possibly can. I loved how she instantly backed out of this as fast as she could with lots of condemnation and anger. And, unfortunately, rather a lot of depressing forgiveness, but more on that later. It did a really good job of taking the romance I steadily disliked in the last book and making it all excellent

This also did a really good job of addressing how quickly Lire wrote off Vince in the last book as well – another issued I had.

Seriously, it’s like a point by point fixing of every problem I had with the last book.

Like Lire’s overly-compassionate forgiveness that was getting on my last nerve in the last book. And she keeps doing this, she keeps being very very forgiving, very very compassionate; no matter what people have done to her she continually finds it in her heart to forgive her. This book continues this but it has two excellent twists

Firstly, Lire’s compassion is explained by the fact she is a Clairvoyant. She constantly sees things through other people’s eyes because of her power to read them by touching them or objects people have touched. She is an expert at seeing things from different points of view. She is an expert at knowing no-one is simply evil, that everyone has a reason, even a good reason (to them) to do what they do. This makes her naturally understanding and empathetic because she is so used to seeing the complexity of people’s motivations. It’s an excellent development of what it means to be a Clairvoyant (or empath or telepath) and one I’ve never seen developed before in the past.

On top of that we also have Lire’s compassion become such an amazing strength when faced with so many characters who are doing brutal, terrible things for the greater good, Lire doesn’t become one of them. I love this – because Urban Fantasy is full of grittiness and characters deciding they simply have to kill/maul/torture/support Donald Trump and do other terrible, inexcusable things. Lire not only resists that, but she also achieves amazing things by doing this. She wins this book not because she is ruthless, not because of her super powers – but because she is kind. Because she has moral lines she will not cross. And the book doesn’t feel the need to punish her for this.

It doesn’t make the book is super naïve and fluffy. The balance is good, because we do have these characters doing terrible thing, Lire condemning them but at the same time knowing why they’re doing it – because they feel like they have no choice (like the King of the Fae who massacres and tortures humans for the sake of preserving his people and the planet). She doesn’t condone it but she sees their reasoning and through that the book does give a nod to people feeling they have no good option.

I can’t say this enough – this book has taken all my problems and not just fixed them but created a whole new level from it. Even her new budding relationship with Tiereachan and the need to bond with him comes with a whole lot of suspicion and reservation and actual development

Extra bonus? She looks back at her slut-shamy opinions of herself AND of her receptionist Monica which I mentioned as an issue in Deadly Remains and realises how wrong she was, correcting herself. Yes, I’m gleeful.

And here’s a fascinating little twist – we have a vampire who actually pretended to be a child to go to school in order to learn. Yes actual learn. I mean no-one learns in school in Urban Fantasy! But this actually makes sense, I mean a 300 year old being is going to need to update their education to a modern level and school is a good place for that (though reading YA and Urban Fantasy would definitely surprise you on that)

In terms of marginalised people we’re still not in a great place though. Lire is an excellent female character and she’s address her previous issues. But despite having strong female friends in Jules and Kim, neither of them play a dominant role in a book which is very very very very very very male. Jules is basically a damsel and Kim – who is also the book’s sole LGBT character (she’s bisexual. Her partner is mentioned but not really present) who largely exists as a spokesperson for Brassal, the male fae she’s linked to (part of the excellent world building of how fae communicate across the barrier between worlds) more than as an independent character.  Everyone else around Lire – Kieran, Red, Tiereachan, Michael, Fisk, Alex the vampire, Caiside – a whole lot of men there.

In terms of POC I can only think of Nathan, the enemy vampire who at least may become more involved in future books. We have Diedra Yamaguchi who is Asian – but she only has a brief role as Alex’s menaced lackey. Again we may see her more in the future but not much there now. It’s possible that the leader of the hunt is a POC since he is described as being “tawny skinned”. Again this isn’t a major character since he’s more of a force that Lire worked to humanise – which, I say again, has the potential to be more in the future. I say that a lot – and it’s good but we need more now.

Despite that – and yes, it is a big issue – I still loved this book. It did a great job of looking at all the issues that I’d previously had while still having an awesome plot, excellent pacing and excellent world setting. I love it and I have so much hope for future books in this series