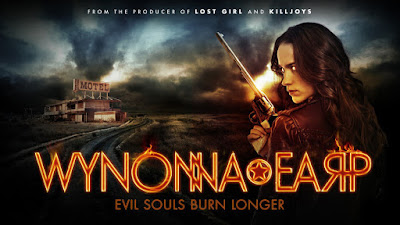 Did I mention that I really love the theme song for this show? I don’t think I’ve mentioned that yet

So we begin with Wynonna’s bad dreams and Waveley’s insight that Wynonna continually killing people and pretending it doesn’t affect her. This lays the groundwork for some emotional Wynonna moments

This, I think is partly being used to justify Wynonna flying off the handle when Dolls and her try to serve a search warrant on Bobo. It doesn’t end usefully with no Revenants dead, no-one arrested and a judge very very pissed off.

About that judge, Dolls keeps trying to play nice with that judge because he has so much power – but given that his agency wiped an entire town off the map in New Mexico I don’t buy they don’t have more local pull. I mean, really? They have two settings, “demand Dolls follows the commands of local authority” and “nuke it from orbit”?

Dolls does play the game a little before finally telling the judge to screw it. Dolls is definitely beginning to melt a little around the edges which I like a lot. Also he can be shirtless more. Yes yes yes yes he can. Oh yes.

We have another lead on the 7 – the Revenants who killed her father and big sister. A Revenant knows where there’s a picture of all 7 of them, allowing her to identify them. But in exchange he wants her help in finding his boyfriend who was mixed up in something with Bobo – yes we have a gay revenant. Don’t get excited yet.

Wynonna follows some leads to find this guy – which involves her having to torture a revenant with the ability to speak with her father’s voice, just in case we haven’t emphasised how much emotional wreckage is being thrown at her. And she does torture him, despite Doc Holliday’s belief she wouldn’t be able to bring herself to it

And they find out that the Revenant’s lover - is the guy who was dragged across the town line by Doc Holliday and has now spent a long time in excruciating, unbearable agony. So much so that he has managed to gnaw off his own foot to crawl back to town lines. He’s in a terrible state and not recoverable. Or I assume not since no-one tries – instead Wynonna shoots both guys who have apparently made peace with being one off suffering sacrifices who die as soon as they find each other

Make peace? In episode 3 we established that one of the Revenants was twitchy and paranoid because being repeatedly sent back to hell had destroyed him. It was the worst thing they feared. Even if imprisoned guy was so badly injured her could never recover and even hell was a mercy compared to living with the pain (yes, epic gay suffering ending in passive suicide) then at least Fish could have lived out his days in town, apparently willing to work with Wynonna. I’m not buying these deaths or the “make peace” element to make Wynonna feel better about killing them (which also leads to her telling Dolls she wants to do that more often for hr own peace of mind).

In know this show’s creators are doing the tour of various blogs to sell how wonderfully LGBTQ friendly this show is (and The Mary Sue, unsurprisingly, has bought this) but is this it? Bit parts and one-off introduced gay death? If this is the best you can do, show creators – stop bloody trying. Or at least stop expecting praise for it.

Wynonna does get a collection of old photographs – robbing the police station for it (the expression on Doll’s face when he catches her is priceless) though she finds the power of her boobs to control workmen fails when they turn out to be straight women. Don’t worry, they have Doc Holiday in return.

From those photos, Dolls sees an indication that the suspicious judge may also be working for Team Revenant. All the more likely since Bobo was tipped off about their raid.

And we have a new character – or rather the final appearance of Constance, the Bone Witch. She is powerful, quite capable of throwing revenants around (she and Bobo have an… intense, love/hate/sexual/abusive/I don’t even know relationship). She also has some legal pull since she gets Bobo released after the botched raid and acts as their lawyer. What does she want? For the Revenants to put together 2 skeletons for her – it looks like she plans to resurrect them. In return she’ll free them from Purgatory

Of course, this is the woman who Doc Holiday wants to kill. In fact, Wynonna uncovers that it’s pretty much his only motive: certainly above helping her. This feeds into part of her motivation change to want more than revenge since she doesn’t want to be as consumed as Doc Holliday. Despite that insistence, their relationship also enters “it’s complicated” status when they have sex.

Bobo also says that Constance the Stone Witch is terrified of Doc Holiday – which seems odd because in their brief meeting she seemed to have him magically handled pretty quickly. There's definitely a lot more to come there to unravel this one