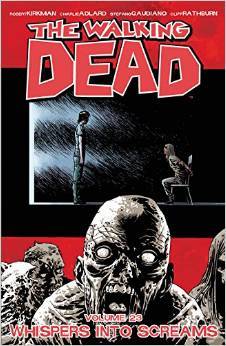 It's a new world and that means that everyone has a role and a responsibility. Alexandria and The Hilltop both end up dealing with new people leading to a result which sets up the next story arch. Now that Carl is at the Hilltop and Rick is gone,  it's time to fulfill his ambition of becoming a blacksmith.  His famous name still haunts him and people gossip about him.  When a run in with Sophia's bullies turns bloody, Carl discovers that he hasn't left his violent ways that far behind.

Carl's transition from Alexandria to The Hilltop is not at all smooth. He takes the time to catch up with Sophia and the two of them reminisce about what their life was like when they lived at the prison.

One of the things I really liked about Whispers Into Screams, is getting to see Maggie in a leadership role that does not involve extolling the virtues of Rick Grimes.  As the leader of The Hilltop, she hands out assignments as well as punishments, deals with threats and keeps the community working. Unlike Rick however, despite all that Maggie has been through she has not been deified. Given that Maggie is referred to as a "bitch" and a "cunt" several times in this volume it's clear to say that her gender greatly impacts how she is viewed by the people of The Hilltop.

Akin to Rick however Maggie does seem to have at least some degree of plot armor which I was quite happy to see.  When Gregory riles up the citizens about Maggie's failure in their view to harshly punish Carl for beating and nearly killing Sophia's assailants, they decide that it's time to kill her. Gregory's motivation is to regain the position of power that he lost just before the war with Negan. Gregory's big plan is to poison Maggie but for whatever reason, what he used didn't work and Maggie ends up ordering Gregory to be locked up.  Maggie who is full of snark, questions how Gregory would be as a leader when he cannot even murder her successfully.

The one thing that has always been certain about The Walking Dead, is that if things start to go to well, for too long, a new challenge will arrive. In A New Beginning, we met the Whisperers for the first time.  They are a group of survivors who disguise themselves as zombies and even travel with the herd. At this point, they have taken a few people in the fellowship prisoner and killed others.  Jesus goes out riding on patrol and has a run in with the Whisperers.  He manages to kill quite a few of them, rescue a fellow patrolman and take a member of the Whisperers captive.

Lydia is a sixteen year old girl and she is like no one we've met so far.  Because she travels with  the zombies, Lydia has come to see them as her protection and her comfort.  Separated from the zombies and her people for the first time, Lydia is alone and scared.  Carl, who has been locked up until Maggie can get to the bottom of the altercation he was involved in, tries to comfort Lydia and assure her that they are good people.  They get to know each other a little and Carl even gives Lydia the iconic sheriff's hat. Later, Carl argues with Maggie about keeping Lydia locked up, suggesting that Lydia isn't a threat to anyone.  It's only when Lydia refuses to speak to anyone other than Carl that Maggie consents.


Carl shows Lydia around and after a few minutes, Lydia declares how much she likes Carl.  Lydia asks Carl to take off the glasses he uses to hide the scars from when he was shot in the head and Carl refuses.  Lydia however will not take no for an answer and rather than being repelled is in fact quite turned on by Carl's scars; however, no one really needed to see this: 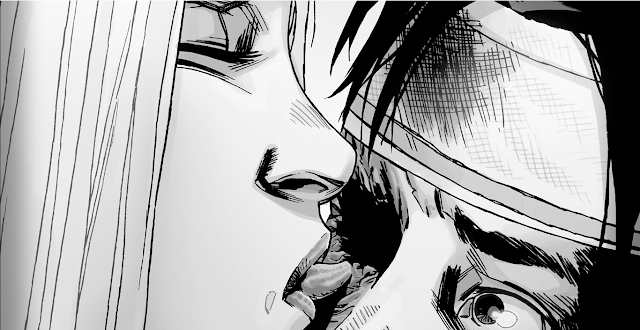 One eye socket lick later, Lydia and Carl are getting it on.  Lydia reveals that while the sex they had was awkward it's better than that she has before.  It seems that Lydia has regularly been raped by her people though she refuses to call it that saying that the word rape belongs to civilization and they are all animals now.  Carl rightfully his horrified by this confession and promises to protect Lydia. A relieved Lydia decides that she doesn't want to return to her people and wants to stay at The Hilltop with Carl.

Well, it's case of the path of true love never running smooth because the Whispers show up at the gates of The Hilltop and offer a trade.  They offer up two of the patrol men that they have been holding captive in return for Lydia.  It's worth it to them because Lydia is the daughter of the leader. The leader of the Whispers also asks that The Hilltop people stay out of their territory in the future. Carl tries to plead with Maggie that they shouldn't make the trade but having not heard Lydia's tale of rape, she is eager to make the trade and go on with life.

Naturally, Carl cannot let things stand and despite the deal Maggie made, he decides to follow Lydia. This cannot be leading anyplace good.  The Hilltop and The Whisperers might never have met again, but Carl breaking the rule about not entering their territory is going escalate the situation and if Carl is in danger, Rick most certainly will get involved.

Whispers Into Screams isn't really an exciting read but I don't think that it's meant to be. It's clear that Kirkman is setting up the stage for the new antagonists that our group of survivors will have to deal with.  Once again, the real threat comes down to what humanity will do to each other rather than the zombies, who seem to be well managed now.  It also shows Carl stepping into the limelight and making decisions for himself, as well living with the repercussions.

Carl has been through a lot in this past 22 issues and I find his decision to go after Lydia given what he knows is at risk to be just a little bit odd.  Instead of allowing Carl and Lydia to develop a relationship over time, Kirkman uses sex as a short cut and that just doesn't work as far as I am concerned.  Carl should be far more jaded about what Lydia is telling him at this point.  Yes, I agree that we should always believe the victim but Carl has seen the threat people pose in this dystopian world and still he marches away from The Hilltop like he isn't putting himself and everyone else in danger.  He didn't take the time to speak to Maggie or even reach out to his father, he simply wandered off after Lydia.

The Walking Dead has always been a deep dark series.  We've had violence, murder, gratuitous rape and now we have pedophilia. I know that the idea is that when consequences are removed and no social contract exists that people will then become savage in their nature but did Kirkman really have to go there with pedophilia?  The concept of rape is not foreign to Lydia, even though she claims that it no longer exists because people have reverted. Just the knowledge that she should have to consent for sexual congress to occur should be enough for her to have some sort of reaction to her ongoing assault.  Lydia is the one who initiates sex between her and Carl.  Nothing about Lydia's behaviour reads like someone who has been subjected to repeated sexual violations. This is something that needs to be shown and not told. I am also not pleased that Carl is the one who correctly labelled it rape and not the survivor.

The Whispers are lead by a woman, which is a change from any of the antagonist groups that the survivors have had to deal with so far.  It remains to be seen whether Alpha is anything like Negan or The Governor.  The only thing we know is that despite heading to The Hilltop to save her daughter, she's hardly a maternal figure.  What kind of leader Alpha is remains to be seen. I hope that Alpha will turn out to be vastly different because in many ways, Negan really felt like The Governor 2.0, rather than someone new to the story line and The Walking Dead hasn't had a good history with female leaders.