The Rage by Matthew Babaoye 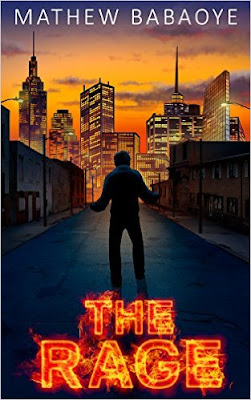 Damon goes through his daily life in an endless struggle: he has a girlfriend he loves, but whose family hates him. He has a job that barely pays the bills and he loathes every second of every day. He has to deal with co-workers he loathes and a boss he despises. His friends have all the depth and subtly of a hammer and are a constant aggravation. He has no family, his home is terrible.

And he has The Rage. The constant, all consuming rage that powers him through his day. The vast well of fury that is slowly changing him even as it gives him the power to keep going. But as The Rage gives him the strength to keep moving it also could destroy everything.

This book begins very interestingly. We have our protagonist utterly consumed by constant, overwhelming, all consuming rage. Every moment of his life is spent reigning it in, living with it, trying to control it, trying not to completely lose himself to it. It affects his every interaction, his every relationship, his every single moment of every single day.

There are many books where we have supernatural creatures battling against the supernatural induced rage – but I don’t think I’ve ever come across a book that so accurately portrays what an overwhelming exhausting struggle it is. How painful it is, how extremely hard it is to live with such incredible rage all the time.

On top of that the rage looks sharply at the society Damon lives in – in our society. He looks at a world where every day he gets up, goes to work, suffers miserably with a wretched job, even doing extremely well at it, with no pleasure, no joy and not even enough to earn a decent living from it. Every day he works, loathing every second of it, hating his boss – and in the end of all that effort, all that suffering even all that success, he’s not even earning enough money to live anywhere but a slum. He’s not even earning enough money to placate his girlfriend’s mother.

This book touches many of the unjust elements of Damon’s life and, through it, our society in general – the patriarchal expectations forced on him trying to be “worthy” of Monica (and worth is strictly linked wealth and earnings. This is so strongly laid down that even her abusive ex is considered a better candidate, even with his abuse, because he’s a good earner and goes to church: the fact he is violent and hurt her never comes close to mattering as much as his bank account and social position.). How effort and even performance is no real guarantee of getting that much worth. Of how women often have to tolerate constant sexual harassment at work without saying anything. Of living a life which is nearly always consumed by doing things we hate just to find a few brief moments of happiness.

The only issue I have wit this depiction is that Damon’s all consuming rage pretty much puts everything on the same level. His hating his job and being judged for it is rage inducing – but so is waiting in line in the supermarket or someone talking to him at the bus stop. Is this social commentary or is it just supposed to be Damon’s irrational rage at “normal” things?

The commentary and depiction is excellent for about 50-100 pages

I suppose that in and of itself may be a stylistic choice. The monotonous rage of Damon’s life is reflected by the monotonous repetition of the book itself.

And nothing really goes anywhere except him steadily getting more angry until we finally reach a climax which is basically an Incredible Hulk scene with him rampaging around as some kind of super human. But we have no real explanation of this, not real plot or resolve or world building or development. It’s like the whole book exists to be a rage filled seethe against the problems of modern society (which isn’t a bad thing) but doesn’t really have anything else to back it up. The points it had to made it made in the first hundred pages and I’m not sure what the point of the rest of the book was or what the ending was even supposed to be.

We do have numerous POC, albeit the book is subtle in descriptions enough that it’s not always obvious a character is a POC on first description – it does become obvious once you remove the assumption of a white protagonist, if you cast aside the societal default. Damon and most of his friends are Black men (they do throw reclaimed slurs among themselves from time to time); there’s also a little touch on some microagressions he deals with but very low key.  Monica and her family are Latino (they’re a bit text book of a Latino family, strong Catholic family with powerful family ties focusing on the patriarchal provider while under the influence of a powerful, unwavering matriarch).

Other than Monica who is placed on an utter pedestal of amazing womanhood, other women don’t do well under Damon’s rage-influenced gaze. Usually overly sexualised and constantly using the word “bitch” to refer to them over and over. This is supposed to be part of his endless rage but stinks a lot of misogyny.

We have no LGBT characters but there is a gay cashier in the shop who is literally referred to as “Flaming Gay Eddie“. I kid you not – if you’re going to include a gay bit part for 3 paragraphs and do this… just don’t bother. The book also uses faggot a lot and it’s not like there weren’t plenty of words that would do just as well.

There’s an attempt to poke at fat hatred in this book but it all falls flat. Damon’s rage brain starts judging a fat person stood in front of him but then takes it back and has to concede that what the man has bought is actually really healthy. Look, it’s easy to point out the wrongness of fat hatred assuming all fat people eat deep fried lard covered in sugar, but the core isn’t “actually fat people eat healthily” but “it’s none of your damn business what a fat person is eating”.

I’m left thinking this was a very good book concept – but it needed more. A plot, a direction, a purpose beyond the wish to portray a message or an ill defined rage about a broken society. I needed more meat to this skeleton of an idea and more development of the concept. There’s an idea here but nothing has really been built around it