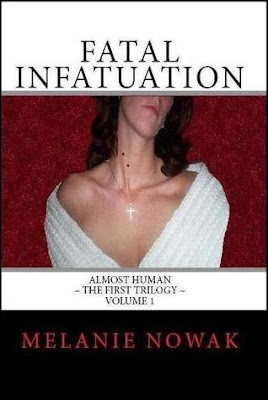 It felt very paint-by-numbers to me. We have our protagonist, Felicity, going to college in a new town. Which turns out to have vampires in it (a fact she absorbs quickly) including Cain (yes, Cain. Cain.) This is the good vampire, on first meeting he saves her life from the bad vampires and the inevitable crushes begins. We’re quickly railroaded in them heading together with him finding this college student he barely knows as super compelling. We even have the extra lines about how he never ever lets himself get close to other people any more but for some reason Felicity is just too compelling for reasons that are never made clear. Oh wait, later there’s a line that he finds her attractive because she’s a human who knows he’s a vampire and isn’t wary about being all alone with him

This building romance has speed bumps in the form of misunderstandings, occasional worries and introspection none of which lasts more than a few pages and really doesn’t generate a whole lot of worry or introspection

Which was another irritant – I mentioned that Felicity accepted vampires quickly – well it was pretty ridiculous. It was like “vampires are real!” ok… and she moves on. She doesn’t have a whole lot of questions, she doesn’t take much time to adapt to this, she doesn’t change her behaviour a great deal, she doesn’t make many enquiries, she doesn’t talk to people about this, she doesn’t ask why this town is vampire central or whatever else is out there or whether there is anything stopping the vampires attacking. When she learns Cain is 300 years old she decides to… research the Salem Witch Trials…

…I have no idea why. Not even the slightest clue.

No, she doesn’t have Myspace. Because it’s the 21st century. No-one has Myspace.

She thinks people will assume she’s a bumpkin. Well, yes, if by “bumpkin” you mean “raised by wolves wearing clothes made from animals you killed with your teeth.”

Don’t get me wrong, there are definitely people out there who do not have computers, mobile phones or tablets, and certainly people going to college who do not have these things. It could have been an excellently made point about class, academia and how scholarships don’t cover all the other necessities of college life – but she doesn’t follow this through. Ok she’s not rich but she is going to college without a scholarship, we don’t see her worrying about money. We don’t see her budgeting. We don’t see anything about her characterisation to suggest money trouble or any other reason why she would be lacking in what many would consider essential tools for college. Or life. She spends a moment complaining about not being able to get in touch with her friend back home – well maybe she’s out of carrier pigeons? Does the Pony Express not run nearby?

Let’s touch on the other characters. We have one other semi-main character guy called Ben who is kind of sort of trying to provide a third leg of a love triangle only in the way that felicity occasionally thinks of him as a possible love interest then not and focuses more on Cain (who Ben hates, of course)

And we have a collection of not-too-bright, scantily dressed, flirting girls (including the big bad. Who is also interested in Cain so is clearly made of evil!) who Felicity doesn’t like joined by hyper jealous smart girl who is jealous and so jealous zomg, who represent the rest of the female gender. Yay characterisation

Lastly, the writing was also something of a barrier. Just a bit long winded, just a bit elaborate but mainly containing way too much tell (often WITH show not instead of). Like said jealous girl? She doesn’t actually do or say anything that would make me think she’s super possessive and jealous. She just is described as such. Or there’s a scene where Ben is all moody because he didn’t get a ride home. Not only do we see him have a tantrum for half a page but then she has to tell us that he’s disgruntled about missing his ride. We already know, we just saw that, you didn’t need to tell us as well.

I say again, though there were a lot of niggling issues with this book I didn’t like, it wasn’t terrible or hateful or offensive or enraging. It just gave me virtually no inclination to keep reading.