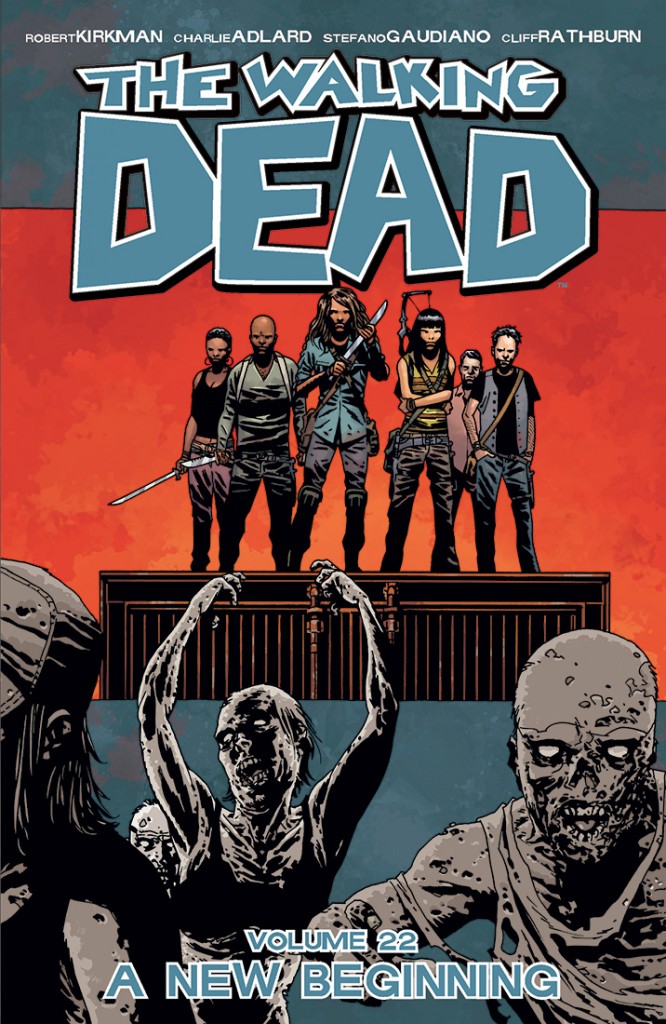 Things have really changed for the survivors of the zombie apocalypse.  It's been two years since the war with the Saviours ended.  Negan has been locked up in jail in Alexandria and sentenced for life. The Hilltop, Alexandria and the Kingdom trade supplies with each other and a modicum of civilization has returned. Riders patrol the area on horseback between settlements making it safe for people to travel.

Each person is assigned a role and the young have to apprentice. Even Carl is embracing the change and has decided to apprentice at The Hilltop to become a blacksmith. Rick has his concerns about letting go of his son but ultimately realises that it's time and that he has to find a new purpose to live.
A New Beginning is aptly titled because this graphic novel is what happens when the weak have died off, people have learned how to deal with zombies, and no humans are making power grabs.  Civilization certainly isn't at an industrial level but a modicum of order has been returned.

A New Beginning is yet another evolution for Rick.  When we first began, Rick he was scared and desperate to do anything to get back to his family. Over time we have watched him deal with loss, check out mentally for a while, become cold and vengeful, distrustful and finally full of rage. For the majority of the comics, Rick's life has been about surviving from one moment to the next, mowing down whatever person or group dared to get in his way.  Each success has emboldened him and cemented his position as a leader.

Rick at this point has become more than a man to many people - he's almost a God.  Everywhere he goes, people are in awe of him and everything that he has achieved. He complains and even mockingly chides Maggie about the hero worship, though it's clear on many levels that he enjoys it. Rick Grimes the saviour of all is enough to have me rolling my eyes. If anything, Rick is perhaps at his most annoying.

It's clear that everything Rick has gone through has taken his toll on his body. Rick now walks with a cane and is not nearly as quick as he used to be, yet he still thinks of himself as invincible. When Rick and Carl run into walkers on their way to The Hilltop, Rick is insistent that Carl stay back with the gun while he fights off the walkers.  Rick manages to kill two walkers but Carl is forced to shoot the gun despite his father's fear that the sound will draw more walkers, to stop Rick from being bitten from behind.  The Rick of just a few years ago would have been able to handle this threat.  When poor Benjamin from The Hilltop - the rider responsible for the area arrives, though he is apologetic, Rick beats him with his cane and berates him until Benjamin is forced to curl into a fetal position to protect himself.  Rick screams that there would be many happy for Benjamin's job. Rick feels free to express his power violently without fear of retribution.  Clearly, Rick's rage is about his own body giving out on him than Benjamin's supposed incompetence.

Rick's relationship with Andrea and Carl has become cemented.  These two clearly turned to each other out of loneliness, fear and grief and now it's clear that they are partners in every sense of the word.  Rick goes as far to let Andrea know that he doesn't just consider Carl his son but their son. Carl refers to Andrea as mom and they have clearly formed a family.  Rick now has exactly what he lost when the apocalypse happened - control over his life and a family; however with his original group split up, what he doesn't really have are friends. At The Hilltop, Rick tells Maggie how much he misses Michonne.  While it's clear that he misses Maggie as well, and though Maggie is the leader of The Hilltop, they are clearly not equals.  Maggie like most others, worships the ground that Rick walks on. When Eugene talks to him about his troubled relationship with Rosita, Rick is quick to blow him off. He has a much easier time relating to Eugene about projects happening in Alexandria and the unique set of skills Eugene offers the community that he does being a friend when Eugene needs it.

As head couple, Rick and Andrea  are responsible for welcoming new people into the group. Out on patrol, Jesus meets a new group and they are very reminiscent of the way that Rick's group behaved when they first arrived at Alexandria.  Their leader Magna is very suspicious and firmly believes that things seem to be to good to be true in Alexandria.  Magna's group actually breaks into Andrea's home and demands she answer their questions.  Andrea is still tough as nails however and warns them that if they hurt her, they will never leave Alexandria.  Magna even leads her way into the jail where Negan is being kept and though he puts up a good act claiming that he is being tortured by Rick, who is a sadistic leader, Magna doesn't buy it and leaves Negan to rot in his cell.


For the last two years Negan has been locked away and only Carl visits him.  They have developed a strange relationship where Carl tells Negan his secrets and Negan gives him advice.  At this point, Negan thinks that he has earned a little good will from Carl; however, Carl very much still wants to kill him, much to Negan's horror.  Not to worry, Negan hasn't been completely beaten. He still takes the time to taunt Rick about Carl's visits and the fact that each day, Rick has to take away his slop bucket. Though Negan claims that he will one day get his freedom and revenge, Rick is adamant that he has tamed Negan and can tell by the fact that Negan's speech is no longer peppered with obscenities.

Life is like a pendulum and that means it must swing both ways.  For the last two years, everyone has become comfortable.  There's plenty of food, Alexandria is even hosting a fair for it's trading partners and building housing for visitors.  Larry and Louie at The Hilltop are even brewing an alcoholic beverage, planning to be rich or whatever that looks in the world as it is now. This would have been unimaginable just a scant few years ago. When Scouts from The Hilltop end up in uncharted territory, trying to grab a pack of wild horses, they find themselves surrounded by zombies.  When Marco hears the zombies whispering, he actually fleas and leaves an injured Ken behind.  When Marco regains consciousness back at The Hilltop, Maggie decides to send out a search crew to find Ken, unaware that she is sending them to death.  Like Marco and Ken, the search crew hears the dead talking.  All are killed in the battle except for Dante.  Dante notices something different about the bodies and when he takes a closer look, he finds that it's a woman wearing a zombie mask.  Dante doesn't make it back to The Hilltop to report on this threat because he finds himself surrounded by more survivors and now,one of them is pointing a gun at him.

This episode introduced several new characters of which the majority of them are of colour.  I very much like the diversity but I am highly aware that The Walking Dead has a history of disproportionately killing off its marginalized characters.  Speaking of characters of colour, did they really have to give Maggie a nanny of colour?  If everyone has a job and a role, why is it that once again, a woman of colour is in charge of caring for a White woman's child.  Thanks for that The Walking Dead.

Several of the characters who have been us for awhile have changed.  Heath now has one leg but this does not stop him from working with a group to herd the zombies away from The Hilltop.  It's clear that he is an important relied upon member of the group.  With peace now across the land, Eugene's importance has really become magnified.  He has helped them create a mill, making fresh bread available for the first time, make much needed bullets as well staying on top of building.  He is anything but a drain on the community but he still clearly has low self-esteem and does not see himself as worthy of Rosita.  Sophia has changed so much.  Now she is strong and taking on bullies. Sophia has become quite the opposite of her mother Carol.  It's clear that she still cares for Carl and that he might have just recognized his match in her.

Finally, we come to Carl.  When we first met Carl he was just a little boy and now he is coming into his own and becoming a man.  Carl wants to make his own mark on the world and is very much in the middle of that confusing teenage time.  When Carl and his friend Mikey go to a girls house, she shows them her breasts.  This is enough for Carl to lose interest in her because he doesn't want to be with someone who would do that. Somehow, this young woman was wrong to expose herself in Carl's eyes but he wasn't wrong for looking.  I understand that Carl is a young man but it smacks of he's a stud she's a slut and I really could have done without that.

Perhaps the most interesting thing about Carl is his ongoing relationship with Negan. Though Rick forbid Carl to spend time with Negan he still visits him.  Even when Negan was the ruler of the Saviours and Carl was his captive, there was always an instant dynamic between them.  Carl may hate Negan for killing Glenn in front of him and all of the other violence that Negan has committed but was is clear is that there's a connection between them and despite is circumstances, Negan is still very much a magnetic person.

Obviously the Whisperers are the latest threat to survival.  At this point, we don't know how much they differ from Negan or The Governor.  The fact that they dress like walkers and travel with them is certainly a new tactic.  At this point, we don't how large their group is or what their goals are.  I am really hoping for a different kind of antagonist because in many ways, Negan felt like The Governor 2.0.  I do however like the fact that The Walking Dead has made a point of illustrating that the zombies are manageable and that real threat continues to be humanity itself.  Even with everything the world has lost, there are still those who seek to dominate, and oppress.