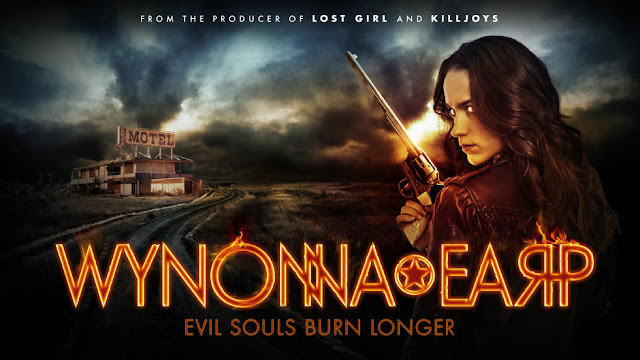 Wynonna is now a proper member of the Black Badge brigade which means Dolls is all official and she is all snarky. He has lots of official research. She has her own family history – and they clash a bit but not so much as to give me a headache. Though I think Wynonna gives Dolls all the headaches. Dolls also puts the sheriff in his place which is kind of fun.

More menacing, apparently the powers that be behind his organisation (founded by Roosevelt) will destroy the town if any news of the supernatural leaks, which is something of a problem given how unsubtle Wynonna is

I quite like that they’re both right in some instances: her about how all of his shiny guns don’t mean much next to the Peacemaker, him about making their home safe

Which is top of Wynonna’s priority list this episode – finding a safe place, what with Revenants invading Gus’s bar and Waverly’s flat. They need a safe place – which would be their old homestead since it has never been attacked by Revenants except for that one time when they lost their dad and their older sister.

Turns out, per Dolls’ research, the homestead is magically protected: unfortunately when she was a small child, Waverly was manipulated by a Revenant posing as her imaginary friend to bury a talisman that voided the protection: they just have to dig it up and get rid of it to get their safe space back.

They do this in the face of this week’s monster – a big shadowy Revenant of scariness who hunts down a target when receiving a living human blood sacrifice. Despite being all shadowy and scary and able to put out lights, and one of the Seven Revenants that took down Wynonna’s father, he doesn’t seem to be all that special and the Peacemaker puts lots of holes into him. In fact, as a villain, he seemed far more invested in being scary than deadly. Not a great bad guy. It does give Wynonna and Waverley chance to bond and be all sisterly which is nice.

We must also note that Waverley has the worst judge of character: deciding Doc is a good guy, not picking up any of the subtext from officer Nicole Haught until she was hit round the head with it and, of course, there’s that whole imaginary friend thing. But what she does have is excellent research which Dolls recognises and brings her in as an overly eager consultant

I spoke about Doc Holiday but, despite being involved a lot in this episode, all I can say is he’s a mystery. He’s not popular with the Revenants given the whole hanging around with Wyatt Earp thing, but nor is he hated enough for them to actually do anything about. He seems to be at least sympathetic to the Earps but also willing to put on a show of hating them: and he doesn’t seem THAT concerned about their safety or at least their safety is a lesser concern to him. He also isn’t a Revenant – he can leave the town lines, unlike the rest, handle the Peacemaker (which kills Revenants) and his human blood can summon shadowy monster Revenant. Whatever he is, chief Revenant promises him revenge against someone who did that to him – so I’m guessing his immortality is something of a curse. All we know is that it was done by a woman.

I’m just going to file Doc Holliday under “unknown” at this point. The big bad guy is also somewhat mysterious – he’s working on all of them being able to leave town and puts killing Wynonna and stealing her gun down as not their priority – instead this mysterious “Seven” will handle that.

It has come to my attention that certain people, namely people who live in Igloos in a land of constant winter populated by Mooses (Meese?) and White Walkers, do not think this show is fun. Since said beaver-infested-land-living-person also didn’t like Librarians, it’s clear she is very very very wrong.

Ok, perhaps it isn’t high art or all that deep or nuanced or well written – but it is fun. And sometimes a little silly fun is all we need.