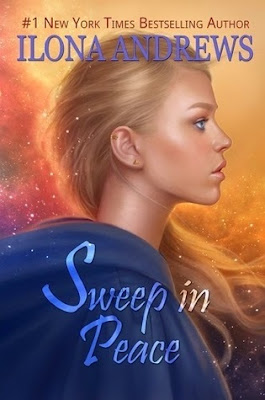 Dina is still desperately struggling to make sure her inn can survive and thrive despite being off the beaten path.
Which means accepting jobs no other innkeeper would dream of taking: when the Arbiters want to use her inn to host peace talks which are virtually doomed to failure – and likely to blow up into violence and destroy her inn – or her inn’s reputation which would be just as bad.
But the risk comes with a very high chance of reward… and maybe it will be worth it.
I always have a moment of glee when I have an Ilona Andrews novel to read, and this is no exception. These books are always ones where I read it, finish it and then instantly regret that it’s over because it was so awesome and so much fun that I want it to just keep going and going.
Dina has officially developed the niche she mentioned in the last book – her inn is not on a thoroughfare and can’t possibly rely on passing trade so she needs to find another way to bring in business. This way involves taking on the business no-one else will touch, the cases that are too dangerous, too risky for any sensible innkeeper to take on. This makes for major, dramatic, world shattering scenes, lots of excellent danger, lots of dramatic happening and Dina constantly walking the delicate tightrope if being 2 seconds from utter disaster.
And I love how she handles it. She’s always smart. She stands up for herself and demands respect and honour for her position without being ridiculously aggressive or violent – as is too often used as a method of showing defiance. Like the only way to show strength is to be so violently out of control that no-one could possibly give you orders. She manages to combine an excellent amount of respect and regard for her guests who she honours with all the regard of their position while at the same time being very clear where the lines are and punishing them severely when they cross them
I can’t really stress enough how well this balancing act is maintained – the combination of respect, control, allowing the hosts and controllers of the summit to actually do what came to do while at the same time managing to protect herself and her business for the future. It’s full of action and awesome displays of power and really wonderful dramatic scenes of super powers all really well written
But despite her awesome power that is so often displayed so well her real super power is her knowledge. The fact she knows about the various customs of her different guests, she knows their deity needs, she knows their religion and history and symbolism and cultures. This is what I really like – she’s an awesome character not based on how super powerful she is but based on her intelligence, her knowledge and her skilful negotiations of situations are really what makes her special. But the awesome super powers just add a shine to her as well.
This book also manages to combine high drama with immense amounts of fun. So very much fun. I have to give 100 points to the over-dramatic hedgehog chef (yes, he’s a giant hedgehog who is an excellent chef and full of drama. And yes it’s fun and yes it makes sense. No really).
But through that fun we have incredible, overwhelming, terrible pathos of an absolutely awful war which is tearing these species apart. We can see how their culture and their history impacts the whole war – and it’s so desperately sad. All of it so very very sad and poignant and powerful I really can’t stress it enough
That’s the two things that really stand out in this book – the incredible richness of the world setting, the incredible detail that has gone into every culture, every race, every conflict – and the way the writing manages to combine all the very excellent tones and makes them work together. Fun, action and sadness all together – it’s really awesome.
Diversitywise, we have some much needed POC among the Arbiters – they don’t parallel Earth since they’re not from Earth but there is finally something other than white people among the humans. But this is one of those series, though it does acknowledge different ethnicities within the alien species which is interesting. Still there’s not a lot there and no LGBT people either. Which is a shame because most of Ilona Andrews’ books are much better than that
This series is bringing me joy
No, really, I can’t under-state how much glee this series brings me. I love it, I love how original it is, I love the writing, I love the story, I just love it so much. And if you don’t love it, you have no soul. Yes I’m sticking by that