This week we have the dead coming back to life to kill the living. Which sets a very bad precedent


Dean sees the case and is all gung ho because another case is exactly what is needed to keeping him from dealing with all the big bad scary feelings that are tearing him up. Sam wants to address those feelings, especially how Jack is a real boy and is trying. Dean is full on  “everything is awful and we’re all doomed and evil” mode but Sam manages to beg him into letting Jack come along


Of course, Sam has to convince Jack as well. He’s still feeling Dean’s hatred and he’s also leery of Sam now after overhearing last week that Sam just wanted to use his powers to free Mary from the alternate hell dimension. Sam pulls out a decent speech about how, yeah, saving their mother would be cool, but even if they didn’t do that that doesn’t mean he doesn’t care about Jack anyway. Also if Jack keeps trying he’ll impress Dean, Dean respects effort


So off they go investigating which also involves explaining to Jack things like ghosts, revenants and why sometimes one has to impersonate FBI agents but yes lying is bad.


Dean has taken to barking orders at Jack like he’s a particularly disliked intern, Sam objects - but it may not entirely be because Dean dislikes Jack (even if that’s a big part) because Sam objects because Dean is acting like their dad - like John (who is, I always maintain, The Worst, come at me John fans). Because this is how Sam and Dean, especially Dean, was raised - barked orders and drill sergeant instead of a parent.


What is curious is that there’s no sign of EMF (ghost) and no missing body (revenant) which Dean burns anyway because of course. I also feel a distinct sense of blase in the research here - Sam and Dean have seen so many of these that they’re defaulting to what it probably is rather than researching… which is probably not a bad thing but to make it seem less careless we could do with more scenes where we see the brothers doing routine ghost slaying, where we see the 9 times where salting and burning bones works so the 10th time it doesn’t stands out as odd


The killing also continues - recently bereaved people being killed by the recently not so dead. And yet again no EMF


Time for some investigating and they find a common thread is Mia, a grief counsellor who worked with both the dead. They go to her, ostensibly to set up an appointment for their own grief - and it’s a trainwreck


Undercover work - with Dean so surly as to make it near unworkable (and, shocking no-one, he doesn’t believe in therapy anyway) - in Mia’s skilled hands turns into actual therapy for the deeply bereaved trio. Sam says he doesn’t think Dean has dealt with the losses (which obvioulsy he hasn’t because he never does) and Dean turns round and lashes out about Sam’s utter denial that their mother is dead in stark terms. Sam breaks and lashes back about how Dean and Mary actually had a relationship, that she would call on him, that they relied on each other (which was true despite the massive drama between them) and now Sam will never be able to have that now. Overwhelmed Sam leaves the room


While Mia reads Dean the riot act - he’s upset his brother so much he had to leave the room while Jack is clearly cowering in terror of him. Rage is an understandable reaction to grief - but Dean is taking that out on everyone around him. Mia is good at her job
And she’s a shapeshifter, as Sam points out returning to hold her at gunpoint. She admits it but she swears she doesn’t kill people: she uses her abilities to turn into people’s deceased loved ones to give them one last chance at closure. Which sounds suspiciously like the actual killings, but she has an alibi for one of the murders which checks out


Instead she raises the possibility of Buddy, an ex of her’s a shapeshiter who was sadistic, liked hurting people (Jack asks if he hurt her - showing he probably has more compassion, especially to a non human, than the Winchesters themselves)


While they investigate and look for Buddy we have some little 1:2:1s. Sam wonders how people accept their dead loved ones coming back to life but Mia explains they don’t really question it because they want it so much. While Jack wants to experience a last moment with his mother - showing Mia the video Kelly left. She does and Jack takes the chance to explain how he fears he’s a monster: he has hurt people and doesn’t feel as bad as he thinks he should about it. Mia suggests that it’s not what he is that matters - but what he does. Something she desperately clings to as a monster herself but determined to do the right thing.


Jack also ends up alone with Dean to insist he wants to help get Mary back… Dean says that Sam’s plans don’t always work. This feels more like a sad realisation than an attempt to attack Jack - Dean has lost hope


Time for the brig fight when the big bad attacks and manages to knock Dean out (really Dean, you left a shifter sneak up on you? Is it me or is Dean losing his edge these last few episodes?) and tie up Dean and Jack. Oh shifter Dean knocks Jack out. See Jack can be stabbed in the chest with an Angel Blade eleventymillion times and not even flinch but a gun to the head and he’s out cold.


Evil Buddy has a whole stalkery obsession over Mia, calling her “my girl” and denying that she gets to leave him, hence his sabotaging her grief counselling. He gives Mia an ultimatum - prove she’s just as bad as he is by killing Dean and Jack or he will shoot her with Dean’s silver bullets. She challenges him to shoot her - Mia tells him to shoot her. Mia would rather die than go back to being a murdering monster


And she doesn’t get shot! Believe me I was expecting her to die since the episode began. A Black woman who is a monster determined to be good and willing to sacrifice herself? There are mayflies with longer life expectancies!


Dean, meanwhile, appeals to Jack to use his super powers because life and death situations brings out the hypocrisy in everyone. When Sam returns Jack does find his woowoo enough to save them all, divert bullets and save the day


In the aftermath Mia is wounded emotionally and says how she just wanted to help people but Jack assures her she did. And she lives! And I do so like these episodes where we see that monsters are way way way way more subtle and nuanced than just “evil thing that kills people”


At the bunker Dean seems to have finally had a breakthrough. He tells Jack “you did good” which is high praise from a Winchester. And he goes to Sam to… apologise. Yes Dean admits he’s been a dick and that Jack is trying… Sam is facing the possibility that Mary is dead but Dean stops him. Dean needs Sam to believe and not lose hope because Dean has nothing, no hope, no faith that it’s going to work out and he needs Sam to hold on to it


It’s the first time Dean may have admitted he’s broken here. So what could save him? 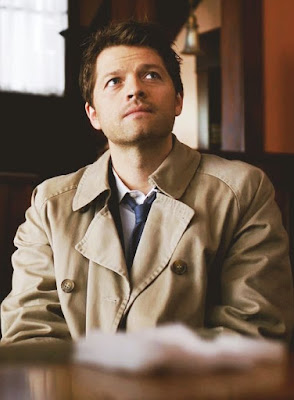 Castiel! Yes he’s in his ocean of endless darkness when a figure of dark gloopiness appears and transforms itself into… another Castiel. Two Castiels! He’s assumed this form because his real form eats the CGI budget would turn Castiel Mad.


They’re in the place of eternal nothingness that existed before God and Amarra arrived and did their little creation thing. This is the place all angels and demons come to after death where they sleep in eternal peace, along with the big goopy one. Except Castiel is awake. And Castiel being awake also wakes his Goopiness


His Goopiness is clear he does not want to be awake, awake is bad - so Castiel needs to go back to sleep or explain his shenanigans. The only reason he can think is that the Winchesters made a deal - as is their wont - to wake him up. Goopiness disagrees because only one person has power in the land of eternal nothing and that would be him and he has made no deals


He ruffles through Cas’s head causing lots of agony but finding no answers. So he decides to resort to beat Castiel into giving up and going back to sleep


Which doesn’t work. Castiel it stubborn, angry and determined - there’s only one way that Goopiness will get peace is to send Castiel back to Earth where Sam and Dean need him: otherwise he will stay awake until they’re both completely insane.


And I don’t even care if retconning a death again is something I’m supposed to oppose for silly writing. Castiel is back and I’m happy