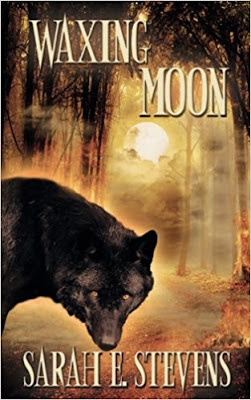 Julie is getting used to raising her powerful werewolf baby - and is still determined to do so alone, in her own home in her own town despite pressure to move to join the rest of the Pack

But when her house is burned down by a supernatural force she never knew about which may be in direct opposition to the powerful werewolf Carson is becoming. Can she assert her independence as a mere human in this world of dangerous supernatural beings fighting over her child?

In my review of the last book, I questioned how this series would continue after the events of the first book. I did suspect there would be some really convoluted way that Julie would end up being bitten and become a werewolf and then have many exciting adventures.

Oh how very different this turned out to be.

The conflict of this book is how much Julie gets to live her own life and how much control she has over raising her own son. It exposes a lot of the glaring problems with werewolf culture that have been briefly touched on but not explored in the last book

None of this is done clumsily. I mean, I would have frowned at this if all the nice people from the first book suddenly turned into hateful monsters. Instead we see it in their general attitudes, who is valued. Who is respected. Looking back among all the action of the previous book we see a lot of subtle or not overly flagged actions now from a very different light. Even how everyone is utterly fawning and excited over her son Carson; lots of little moments

And given how powerful Carson is, to Julie this is just all the more important why she needs to separate him from the damaging prejudices of a society that could have him absorb so

Again, it’s done really subtly, with the battle they’re fighting serving as a perfect background for people to make harsh decisions in the name of “safety”. It’s balanced to be very realistic - perhaps even something we could easily understand and go along with if it weren’t for Julie’s excellent insight.

This also brings excellent further exploration of Julie’s insistence of living her own life in her own town - but I think the best part of this was also looking at Julie’s extremely good friend Eliza. Loyal, supportive, passionate, determined, a good woman AND WRONG. Because you can be a good person and still be part of a deeply flawed, prejudiced system; you can be a good person and perpetuate inexcusable things within that system and being a good person doesn’t make it ok. That’s a nuance that is far superior to the simplistic narratives we see elsewhere

All alongside a battle between factions, some nice sideplots with the wolf-living werewolf and the weird subplot he brings (if there’s one element of this book I’m not a special fan of it’s this rather bizarre, out-of-nowhere romance while they’re so very busy with other things) and Julie struggling with her own need to be involved in the defence of herself and her baby while similarly feeling so helpless, out of place and useless compared to the super powered beings alongside her which adds another element to her struggle for independence.

Throw in lots of awesome action, some really fascinating characters and relationships and there’s a lot of good here. We also learn that Eliza is a lesbian which is clearly indicated and also has a really nice moment where Julie realises her not knowing this about Eliza doesn’t mean that Eliza is deceptive or secretive - but that she herself isn’t a great friend, that she’s very self-focused and self-absorbed and not really being supportive of her.

We have Tim, a Black man, who is in relationship with Sheila, witch and best friend of Julie and one of the few werewolves who Julie may end up trusting
There’s a lot in this book - action, nuance, excellent characterisation, a great story and some really amazing characters. It’s a completely unexpected twist of this series is going in an excellent direction and promising storylines completely different from anything I’ve read before