Once Upon a Time, Season 7, Episode 4: Beauty

So we know why Regina is here, we know why Henry is here and we know why Killian is there. But we also have Rumple running around confusing everyone - so why is the Dark One here?


This calls for a flashback: Rumple and Belle living their joyously happy life with age-reversed baby Gideon, all preparing for Gideon’s first baby with Belle getting all stressed (which I never understand since small babies aren’t going to remember their parties) and I’m bemused by the fact Belle has got Rumple a polaroid. A polaroid camera. Really; I get that we’re working with a medieval aesthetic but can’t we get a little updated


Everything is blissful and they have big plans to travel and life so very happily now there’s no drama left in Storybrooke and because Rumple has managed not to turn evil for 10 whole minutes. Their happy life continues, Gideon gets a little older… and so does Belle. Rumple decides he needs to become mortal so he can grow old with Belle and die along side her. In a speech which manages to be romantic, Belle promises to find him a way to die… honestly it should sound creepy and it kind of sort of does. Honestly “I want my spouse to die with me” is creepy and urban fantasy needs to drop it. Unfortunately for Rumple, getting rid of the Dark one dagger and immortality isn’t easy


Perhaps giving us a tiny clue of why this matters we have Rumple struggling with normal life milestones like Gideon going off to college: it could be, like Emma and Regina, not being ready to see Henry go. Or it could be that an unaging immortal does not feel the passing - or the progress of time in the same way as a mortal does.


Belle, aging in each scene, tells Rumple she’s found a fairy prophecy with various clues which leads them to the end of realms, with a sun which apparently takes forever to set. The prophecy suggests that when the sun sets Rumple will have the key to mortality. They decide to move their and live a drearily boring blissfully pastoral life together waiting for the sun to set.


Time for Once Upon a Time’s homage to Up and their emotionally devastating aging montage scene, which, of course has one tragic ending 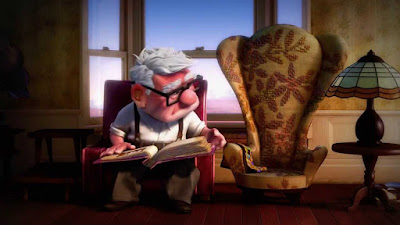 Belle, an old woman, falls and while Rumple begs to use magic to save her, she says it’s time. And she lied about that prophecy - the sun setting means she will die, the sun of his life. And she’s confident he will pass on the dagger to the proper Guardian and return to her. I’m assuming an afterlife or resurrection is involved her and not her preserved body propped up the front room.


Though, in all honesty, this scene is powerful and beautiful and tragic. Maybe it doesn’t have the same impact as Up (thankfully because I don’t think anyone was expecting a Pixar movie to emotionally maul them in the opening scene) but the acting is deeply heart rending.


Rumple travels to find this Guardian and ends up running into Alice, as in Alice in Wonderland, and Henry on a motorcycle.

So to the present and Hyperion heights where Rumple - or Weaver, who clearly has none of his memories - talks to one of his informants: Tilly, Hyperion Heights Alice. And she is random, cryptic, chaotic and nearly incomprehensible. But she still has nifty quips about puzzles and memories and mysteries and everyone wearing masks. She wears a white rabbit mask as well, of course (it’s hallowe’en).


Also note she makes a passing reference to an ex-girlfriend. And I have to say my faith in fandom is somewhat redeemed by NO-ONE making a fuss about this. Possibly because it’s so damn brief no-one noticed or the death of Belle was so dramatic and painful; but I like to think that maybe one off blink-if-you-miss-it mentions are more due an eyebrow lift than a cheer parade.


She also hates Victoria as the worst person whoever worsted. And she wants everyone wearing masks and scattered to stop them all from seeing the truth. It looks like Tilly/Alice is awake to the curse


She confronts Victoria and her babble proves to Victoria that Tilly knows the truth. She pepper sprays Tilly and, visibly disturbed, calls Rumple/Weaver. Tilly left her bag behind, inside which are her pills, suggesting they’re mental health pills. She lays out her demands to Weaver - he get tilly, get her on her pills and lock her up. Weaver reminds Victoria he doesn’t actually work for her, he only does what she wants when it suits him. She counters that she has tapes of their dealings and can totally blackmail him


If there was any proof that Weaver doesn’t have his memories, it’s the fact that a) he did nefarious deeds on camera b) he didn’t realise Victoria has as much to lose as he does.


So coerced he goes looking for Tilly, recruiting Killian to help. Killian pokes Weaver about whether he cares about Tilly or not and Killian snarls all grumpy like.


Weaver does find Tilly who, again, tells him repeatedly that he needs to see the truth, that he doesn’t understand, that everyone has a story to reveal and that Weaver is really a good man, honest. Or rather, she says he’s a good man behind the cop - behind the Beast: in case we had any doubts that she knows the truth. She insists on showing Weaver something to prove it


But on the way Weaver spikes her sandwich with her pills… she feels herself becoming fuzzy again and desperately leads him to a shed. Inside she holds up the teacup. This chipped tea cup which has been a symbol of of Belle and Rumple’s love forever: which he (before the curse) told her would prompt his memory. It doesn’t. So she pulls a gun, calls him by name - yes outright calls him Rumplestiltskin - and shoots him. And drops the cup. The cup is shattered… there’s something deeply disturbing about that


He wakes later, in hospital, with Killian telling him how miraculously lucky he is and how he must be totally immortal to have survive the bullet. Uh-huh. Weaver makes up a story about being shot to protect Tilly because he’s found his good guyness and Killian tells Tilly she can leave. She’s horrified by what she’s done and swears to stay on her pills


Victoria drops into the hospital room to remind him of her threats against him. He tells her he remembers quite clearly; Dearie.

Now we have a narrative problem. See, I can see Regina, Zelena and Cora manage to hold their own to a degree against Rumplestiltskin. Victoria? Step down Vicky, this is gonna hurt.


Time to catch up with our heroes. Henry drops in on Roni all grief stricken about finding his family’s grave. She offers comfort, advice and a pep talk to get out there and take some risks with his future. And get on with Jacinda.


Jacinda has her own issues - she wants to give a hallowe’en costume to Lucy but out of pure spite, Victoria’s not even letting her see her child (again, I want to know what Jacinda did that Victoria gained this level of custody power?) and instead is forcing Ivy (evil step-sister) to take Lucy trick-or-treating instead: despite the fact Ivy would rather gnaw off her own leg.


Paying barely no attention to her, Lucy escapes her to run off on her own (switching spaces with a girl dressed as Elsa. Which is so very meta). Leaving Ivy panicky and going to see Jacinda working in the chicken shop to see if Lucy’s gone there: Lucy hasn’t but Henry has trying to flirt.


Of course Jacinda panics and wants to go looking for Lucy even if it will cost her her job, but Henry agrees to go instead. While doing so he gets to talk to a tearful Ivy who is surprisingly humanised. She’s alone - completely alone: no friends, no family except her mother. She is utterly dependent on her mother’s approval. Henry compares his own loneliness and encourages Ivy to have the courage to take a risk and do the scary thing (advice from Roni, of course)


Which means when they do reunite Ivy is willing to let Jacinda and Lucy spend the rest of the night together. While Henry bottles spending time with Jacinda and instead goes to drink booze with Ivy…


...this could be an awkward love triangle. Please don’t.


But do develop Ivy - if we can examine this form of abuse, how she’s socially isolated and Victoria uses that to control her - that is abusive and it’s good to see this often more subtle and less noticed form of abuse. This is something to explore.

I don't think we've seen the end of Belle, I still think she's Rumple's end game. But if this is, then it was a beautiful, if painful, send off