It’s time for another episode of American Horror Story

And this begins with a quick tour of murderous suicide cults, told from the point of view of Kai all played by Evan Peters. And you may think that maybe it’s tasteless to use so many desperately tragic mass deaths for entertainment foddder


This is American Horror Story


Kai makes the not-so-subtle point that he wants true loyalty and everyone being ready to die for him and all these guys will for reasons we won’t go into because they’re extras and who cares?


Even assuming the town can possibly afford this, the lawsuit from this will be hilarious. He also wants to run for the Senate. Like people would elect a violent bigoted avatar of vileness for…


...honestly I don’t even know why I began saying that. His dyed hair is likely to be more controversial than his violence


He also notices that the women are all missing


Time to catch up with Ally and Ivy - and Ally is officially done. Having waved her magic wand and banished all of her mental health issues, she demands some explanations from Ivy about why everything


Ivy confesses that life was hard - Ally was a complete and utter mess, the Restaurant was a huge amount of work. She wanted structure. She wanted order. She wanted someone to take over and run things for once. She wanted not to be in charge.


Or as Ally put it, she wanted a “daddy”


Which… AAAARGH. No, with that one word you’ve really poisoned this. See, i can understand - and fully sympathise- with wanting not to be the boss for 5 minutes, for feeling like you’re responsible for everything and just needing to take a back seat and letting everyone else run things for a while. This is excellent. This is an important point - especially in a culture which shames people for not wanting to lead or be in charge.


But “daddy” genders it and genders that need. Which has implications which are both misogynist (making it less “Ivy is stressed out and needs someone else in charge” and more “Ivy is a stressed out woman who needs a man to take charge”) and homophobic (since tired gender roles of control et al are often pushed on same-sex couples to either a) point out how lacking they are or b) to assign gender roles to each party)


Ivy now regrets this all but Ally is pretty inflexible - people died because of her. But Ally says she joined because Ivy forced her - by taking their child. And she’s in the cult to get Oz - and Ivy - out


Yes Ivy as well, because she’s not leaving the mother of her child behind.


Ally continues her straong transformaiton by giving Oz a Twisty the Clown comic - and, really, I get you’re over your clown fear because of the magic wand of healing, but let’s be honest a serial killing clown comic is not appropriate reading for that child.


And she has absolutely not one second of time for Winter - though Winter claims she has finally been broken of Kai loyalty by him murdering her elder brother Cheyenne Jackson whose character name I have completely forgotten and this show is not worth me clicking the mouse twice to find out what it was.


I don’t know if I want to wikihow this or not….


Whether this plan worked or not, the cultists show up to drag them into a meeting where the meet a surprisingly alive Bev who gives Winter a much deserved beating for lying about her


Kai has decided it’s time for everyone to prove their loyalty by drinking poisoned kool aid. Of course he does. There’s a lot of shouting, shooting an extra before everyone drinks and Kai reveals it wasn’t poisoned really and he was totally kidding. Obviously this was predictable but the mental toll of this is clear.


Following that, Ally is more than ready to leave - and Ivy asks what about Winter 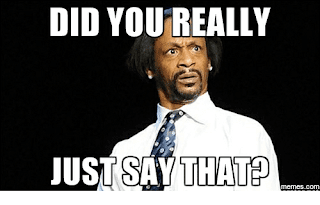 Instead they go to pick up Oz and find he’s already been taken by their nanny. Yep Winter is still on team!Kai which may make you feel better for Ally joining Bev in smacking her


“Looking after” Oz is Kai who gives us another round of homophobia and sexism by repeatedly telling Oz how his family is flawed because he doesn’t have a dad. Oh, yes it gets worse because Kai claims to be Oz’s father - sperm donor. And has Oz calling him daddy and demanding he spend the night with Kai. Ally opposes but Ivy begs them to leave, insisting they have no other choice and Kai is close to killing them all


Ally and Ivy go home - and Ally changes again; seeming to genuinely agree with Ivy that Oz is safe since Kai thinks he’s Oz’s dad. So they can relax and have dinner and wine and discuss Ally’s time in the mental home. See the magic wand she used to magically heal all of her mental health issues was vengeance


I think I will suggest this to my therapist. I suspect he would not approve


And on one hand seeing another gay character die is not fun especially given what a trainwreck their relationship has been. On the other hand maybe we’re one step closer to Ally and Bev getting together and killing everyone


Over to Kai and he’s not having a great fun sleepover with Oz because while he keeps making up nice things about the suicide cults, Oz is there with wikipedia, fact checking and absolutely no indoctrination. Yelling fake!news changes nothing and screaming and destroying Oz’s phone in a tantrum for breaking the rules and thinking doesn’t seem convincing


Ally continues her plan, bribing the sperm bank they used to discover that Kai isn’t Oz’s father - and then asking them to fake up documents proving he is. So when Kai comes round for dinner and a surprising lack of poisoning (awww, c’mon Ally) to profess him the wonderful father of her child and yay he now has the messiah child he always wanted and they can be a family.


Oh she better stab him in the face at some point