Fall From Grace (Exile of Angels #1) by Ron C. Nieto 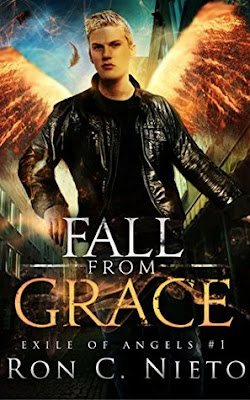 
But occupying a body - a life, a family - that is not his own comes with its own guilt and complexities; how do you explain to a mortal brother that you are trying to free demons from hell?


Especially when that mission becomes far more complicated, with more actors and manipulations with their own sinister motives than he imagined when he first found freedom.


This book has some really fascinating concepts


Fallen angels and demons are not unknown characters in urban fantasy - but I think this is the first time I’ve seen one with this kind of outlook. Henry is neither angsting about being unworthy of god and self-flagellating; nor is he raging about an unjust most High who must pay for his dastardly deeds. He is sensibly and doggedly trying to rescue his brethren. It’s a very personal story, one very much focused on him and not on big grand themes and revelations.


I also like Henry’s character - introverted, snarky, socially awkward but not in the arrogant-and-brilliant-way we see with so many protagonists. Just an inexperienced demon in the body of a man who was socially inept anyway. There’s a general sense with Henry that he’d much rather just be left alone with his books if he could get away with it.


I really like the conflict over what he is - because he possessed the human Henry Black. But he has all of Henry Black’s memories - and his opinions and even his mannerisms - including Henry’s OCD. Henry Black is dead… but how much of the angel/demon occupying the body is angel/demon and how much is Henry?


The concept of angelic power is also an interesting one - the nature of the word, the angelic inability to not speak truth and in changing reality to make it true. Divine power, the power angels can wield but cannot carry because only beings with a soul can do that. This idea that angels wield incredible power but that, ultimately, that power is human and divine and not their own. It’s a nice twist


Henry himself is both albino and has OCD. Both are parts of his character but while mentioned do not consume him. It’s good to see a disability which doesn’t become a character’s sole defining characteristic, but at the same time I rather think the OCD in particular was brushed over. We’re told Henry has OCD but that largely manifests with a need to have everything around him neat and tidy rather than actual compulsive behaviour


Siddik is a POC but his personality and history have been somewhat wiped with his possession/amnesia. There’s another random POC policeman who doesn’t play a huge role - and no LGBTQ people. But we do have a disabled protagonist


So why didn’t I love this book? Why did it take me so long to read? I’ve been turning this over in my head for a while now because it has so many elements I should love but, in the end, I didn’t. I found it something of a chore - and I think it comes down to it having a fairly laborious writing style. We seemed to slog our way through a lot of the text and there were a lot of explanations and activities that were just a little too abstract and theoretical and the big revelations about what was actually happening didn’t appear until the very end of this book. For a long time we had Henry Black moving to Detroit to explore the possibility of other demons escaping Hell without being summoned and then stuff happened. There’s hellfire humans I don’t entirely understand, and a secret organisation that isn’t explained until the very end of the book and a whole lot of personal drama and some other random events.


We also form a group of main characters here which I just don’t really understand. I mean, Phillip? Him I understand and his reaction to the revelations is perfectly natural. But why is Gray so invested? How does he know about demons running around? How is he so blase about it? And then his sister is involved - and then we have Mae? Yes I get that she’s slated to be Henry’s love interest but she absorbs and accepts what’s happening awfully quickly. Even Siddik has a layer of amnesia to prevent him developing a full characterisation, just having a convenient super power.


I find it hard to believe that all of these people are so divorced from the conventional narrative about demons/fallen angels that they’re all this willing to accept one among them and snuggle with them on a sofa. The connection was missing in the book, the foundations for this team and, in turn, made any character who wasn’t Henry feel hollow and two dimensional


I am intrigued by this book. And now we have several revelations I believe it can go forwards and be much stronger, better paced and more solid. It’s a good opener - but just a little too much work to be a joyful read and just somewhat lacking in foundation