In the juvenile detention facility now turned into a base camp, Sam is setting awards for being the most creepy thing ever. When he was a human serial killer he used to sever things and hide them - now he’s cutting off fingers and threading them into a necklace to wear. No more hidden monster Sam - vampire Sam is embracing his evilness.


Felix is utterly terrified - and this terror is perfectly acted - with added horror as Sam calls him “Mohammed” and tries to teach him sign language. It’s all very very very very very creepy and disturbing. Sam tries to ingratiate himself by whipping the leader who whipped Felix, but Felix stops him after three lashes - and the leader is killed. Sam keeps up gestures of caring, putting a jacket on Felix when he’s cold, hugging Felix and, yes, creepy. So very creepy.


Felix does make an attempt to free the remaining captives, cleverly luring Sam to where he can lock him up so he can break open the door where the others are captured - but Sam gets free quickly and decides to restyle Felix’s hair to match Mohammed. When Felix keeps telling Sam his name is Mohammed, Sam cuts out his tongue.


Yes, all the creepy

Over to Vanessa who is in utter rampage mode slaughtering vampires wherever she finds them in never ending rage after Dylan’s death. Julius is trying to bring her back from the edge and using old boxing stories to convince her to play it more safe and not just charge in all the time. She’s not listening; the way she talks about healing also makes it clear Vanessa has fully embraced her super powers in a way that we rarely see. I actually kind of like a super-powered character cocky enough to recognise their own strength rather than constantly bemoaning their specialness.


I think this recklessness is supposed to be what gets them caught by the skinners but I honestly don’t see anything Vanessa did leading them into their hands. The skinners are vampires who skin humans and then wear it because REASONS. Look this is a show that has had Dmitiri and Sholoshenko as villains, I’m going to give all their antagonists who are legitimately scary a huge pass if we can move away from those two. 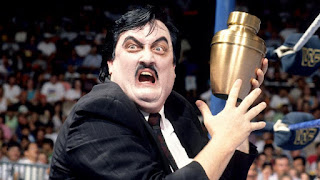 The two are captured, tied up and prepared to be skinned with both of them trying to attract attention to each other because they’ve both developed a martyr complex? I mean, I can see Julius doing it with all of his guilt trips, but Vanessa? Anyway the Skinners are disappointed because Julius is inedible and while they cut a strip off skin off Vanessa (she screams in pain then… seems pretty bored?) she just regenerates it back


Then an unsupervised kid just wanders through the middle of the camp. Hey over the last 3 episodes we’ve seen these woods are surprisingly crowded - but I didn’t expect unaccompanied children. The child attracts attention then runs. With images of children being skinned, Vanessa breaks free and chases after the skinners - only to see them all mowed down by arrows and a small army of teens and kids pop out of ambush
After everyone lowers their weapons we’re introduced to the Johnson’s group


The Johnsons are run by two men - in a relationship as well - and a large group of kids they care for. Part of the way they keep them all safe is killing any vampires entering their territory. Mike and Chad clearly care for the kids, but also train the kids how to fight and kill the vampires. They have fun and games still, while also using storytime as a chance to teach important lessons about being alert on guard duty. They’ve built a compound with electricity, food and it’s generally as good as a compound can be.


Julius loves the place and fits in right away. Vanessa, who has just seen Dylan died, has major issues with the idea of child soldiers. She makes a not-happy statement about stealing children’s innocence. But Chad and Mike are living in clear reality - the world is not innocent and you have to learn to survive. Not teaching kids to live in this world would be a terrible idea


There is a moment when Vanessa sees that a teen called Troy has marks on his arms which he refuses to talk about. She confronts Chad about it and he tells Vanessa it’s from another group Troy was part of which is extremely brutal - but they don’t talk about it because they try to leave the past behind. She offers to show Vanessa the group when they trade with them tomorrow


The group is clearly the teens in the juvenile prison which Sam has just slaughtered - the marks on his arms are from the whippings they dish out.


She does go with them - but when they don’t show up she goes charging in, despite the treaty the Johnsons have with the Prison. They ask Julius if she always charges in without a plan to which the answer is “she’s a Van Helsing, that is her plan”. Which is… not wrong


In the prison they find many many dead teens - missing fingers. Vanessa recognises the handwork - and goes to confront Sam alone.


Side plots - this ninja running around isn’t Sam. But they’re still there all in black slicing and dicing vampires. Axel and Doc are still out there, only now he’s tied up because of blood lust


Ok, kudos to Van Helsing for having some genuinely sinister villains this time. And for having a caring, loving, nurturing same-sex male couple who genuinely do not seem to be evil OR utterly ineffective. More kudos come if they don’t both die in the next 3 episodes.