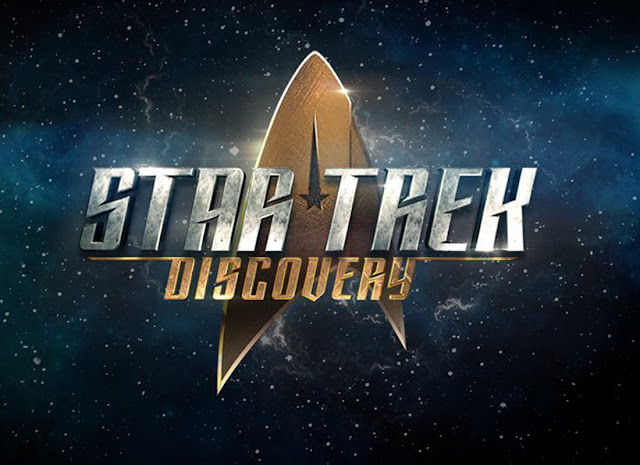 Michael still has all the guilt over how they’re using the Tardigrade and tries to convince Dr. Colber they’re killing it. He agrees to check it out.

Tilly continues to be the adorkable friendly, supporting counsel for Michael, especially with regards to her emotions.

Meanwhile Lorca is having bigwigs at Star Fleet worried that they only have one Magic Mushroom Drive and they really need to enslave and torment more Tardigrades to make them work. Until then Lorca needs to tone it down and stop putting their biggest asset at risk (he and the Discovery are zooming all over the place fighting Klingons)

Admiral Cornwell is also not thrilled by Lorca recruiting Michael - because it’s just making him look bad and he’s not the most popular guy anyway. Of course he doesn’t listen to criticism.

He returns to his ship - but is kidnapped by klingons on the way. It’s on Saru to find and rescue Lorca before he can spill the beans on the Magic Mushroom Drive. His threat ganglia flares when Michael appears so he still has issues with her, still considers her a threat

While she’s not happy with the idea of bouncing all over the galaxy looking for Lorca and killing the Tardigrade. Saru nixes this, wanting to focus on saving Lorca. Part of this may be down to his own intense self-criticism: he even sets up a computer program to compare himself to successful captains so he can match them.

Of course Michael ignores him because Michael has no time for hierarchies and goes right to Stamets with evidence from Dr. Colber that the Tardigrade is, indeed, being hurt. We also see her trying to manipulate Stamets just as she did Saru - this is not a good look for her. And Stamets isn’t falling for it

But he does look at trying to find a work around with Tilley and Michael. They seem to find a way - which Tilley considers “fucking cool”. Stamets agree. Honestly it was natural, adorkable and perfectly showed their geeky enthusiasm for science. I do not remotely get the handwringing over a *gasp” f-bomb and even some people saying they can’t let their kids watch it with them now. Two episodes ago we had a door repeatedly open and close, jammed open by a severed leg. The Klingon captain here is raping her prisoner and we’ve seen multiple people be beaten brutally, including one man getting his face stomped - but “fuck” is the line?

I do not fucking understand fucking people.

It would be fucking cool but they can’t find the right species DNA to make the shiny work without the Tardigrade and Saru is not remotely amused by Michael ignoring his orders and stopping them using the drive. Michael pleas for more time and she continues to try and manipulate him and he’s not having that: her arrogance ignoring orders, sabotaging commands she doesn’t agree with. He kind of has a point. She does treat the chain of command as something to follow if she agrees with it… and not so much if she doesn’t. If she weren’t right we’d be considering her the Worst by now.

They do jump - and the Tardigrade collapses, drains itself and enters stasis. The doctor explains this to Saru and Saru insists on just waking it up again. The doctor is not amused - this will kill it and the tests on the Tardigrade suggest it may be sentient. Killing a sentient creature to use it to fuel your drive is rather a no-no. Saru dismisses this - he has a captain to save. The doctor refuses - Saru instead orders Stamet to do it.

Lorca is on a Klingon prison ship with a man called Mudd, who apparently has history with Star Trek. He rambles his origin story and how he was imprisoned. The Klingons also have a crafty method of stopping the prisoners working together - they come in and demand they “choose your pain” - you can take a beating or nominate a fellow prisoner to take one. Mudd nominates a near comatose prisoner, of course.

We also meet Ash Tyler, another Star Fleet soldier and long term prisoner: Lorca is confused as to how he is still alive. Apparently the Captain has “taken a liking” to him and is raping him, allowing him to live.

While Lorca is taken to be tortured and the hints that the Captain drops suggests she is one of L’rell’s House Moka, known for their spies and sneakiness.

Mudd is the worst - but his criticism of Star Fleet’s endless expansion isn’t entirely wrong - just mainly wrong: how far can you push into the Galaxy before someone objects to you pushing? Ultimately it’s more self-serving and self-justifying than anything. Basically so he can justify spying on the prisoners for the Klingons. He desperately tries to spread dissension by telling Ash how Lorca’s last ship was destroyed and all his crew died - Lorca doubles down: yes they all died but he killed them to spare them a brutal, terrible death at the hands of the Klingons

The next time the Klingons come to issue a beating Lorca chooses Ash - just so they can distract the Klingons and kill both the guards. Both of them were playing weak until they had an opportunity while I am playing doubtful. I mean, I’m not an expert on the physiology of Star Trek aliens, but humans can break a Klingon’s neck with their bare hands?

They escape - and leave Mudd the traitor behind to rot.

Ash and Lorca slaughter their way through the ship, killing klingons and having a moment where Ash attacks the captain who raped him and again seems to win despite fighting with his bare hands. Lorca shoots her but clearly doesn’t kill her. They don’t finish her off because Reasons. Don’t claim ethics - they just left a man to be tortured to death. I’m not buying it.

They flee in a Klingon ship, chased by other Klingon ships and spotted by the Discovery. Saru notices that the lead ship is running from the others using his Arcane Prey Skills (seriously, we need arcane plane skills here. No wonder they kept failing at battle simulations if the entire crew can’t recognise evasive maneuvers) and orders the ship to hail the captain and have him beamed aboard. Yay Lorca is saved. I mean, if you’re a fan of Lorca and all… So is Ash.

Now they just need a Magic Mushroom Jump - which Stamets does. Only using himself instead of the Tardigrade. It half kills him - but only half.

Time for Saru and Michael to have a moment - she asks him if he’s afraid of her. He isn’t, but he does resent her and is angry with her. She was supposed to become a captain, get her own ship and then he would be mentored by Captain Georgiou. Instead Georgiou died and he was left without the mentor she had - but promoted above his confidence level because of it. A lot of his resentment is jealousy. He isn’t ready for what he is doing - Michael tries to reassure him and even gives Saru the telescope she got from Georgiou.

Which I can see… but she also does kind of treat all orders like they come with a caveat “so long as you agree with them.” But I do hope this moment means we’ll have less sparks between them.

He asks Michael to try and save the Tardigrade - a tacit apology and acknowledgement of her point in how the Tardigrade was being used. Michael and Tilly go to it and manage to revive it with spores and freedom -Michael reasoning that a creature that travels the whole universe will be most happy with freedom.
Saru also cancels the program to check on his performance - he isn’t comparing himself to others. And since his moment of glory was using his Prey Skills I believe this indicates his willingness to be his own kind of captain

To Stamets and the Doctor, brushing their teeth while the Doctor frets over Stamets - because they’re in love and a couple. Stamets is all geeky about his mushrooms while Colby is more concerned about Stamets, the man he loves and cares about.
Stamets assures him he;’s ok. But when he walks away from the mirror his reflection stays put...


So, I know there was something of an outcry this episode over Star Fleet’s continued treatment of the Tardigrades and how this is against everything the Federation stands for. It certainly conflicts with the Utopian vision - but I can see it, especially with this series being a prequel. How long does it take for a Utopian vision to take hold? How many hiccoughs are there along the way? Especially with something as ridiculously powerful as the Magic Mushroom Drive… humanity (and presumably, other species taking part in the Federation) aren’t perfect. I can see value in showing the need to fight to obtain/maintain utopia as much as just assuming a utopia and idealism that is just there. Of course, there could have been more… push back against this. Michael really shouldn’t have been the lone voice in the wilderness. But, then, is Star Fleet in general away of the physical cost to the Tardigrade? Or its possible sentience (it seems… unlikely they wouldn’t be)? And isn’t it reasonable that a crew would be willing to fudge some lines to save their captain? Even an arsehole like Lorca. Especially an inexperienced captain like Saru?

So Stamets and Colby. Of course I’m gleeful that after so many many many many many many years we finally have an open same-sex relationship which doesn’t involve convoluted woo-woo on a Star Trek series. And main cast members as well! It’s about damn time. Am I waving pompoms and cheering? No. I’m optimistic and hopeful - but so far the constant snark from Stamets is a trifle leery-ing but I’m also kind of annoyed by this scene. I love that this couple exist, i love that Stamets is a main character… but Colby just told us how much he cares about Stamets and how he is the man he loves. The man he loves who just nearly died, who just risked his life to save him and everyone on the ship. The man he loves is a hero who nearly died and he… touches his shoulder? Engages in mutual teeth cleaning? Really? I think if the person you love nearly dies and you’re alone together talking about it then maybe you might hug at least?

I’m optimistic for more, but this makes me think we’re going to see the bare minimum for them to say they have gay characters.