We have a psychic - an actual psychic with actual gifts. Unfortunately, that’s exactly what a brain spiking wraith wants to snack on. Bye psychic we barely knew ye

We also barely new Missouri - if you stretch your mind back aaaaaalllll the way to season 1 you will remember Missouri as a psychic and a friend of John Winchester, the worst father ever (yes, I know John has a weird following in the Supernatural fandom. He was still the worst. Bring it). She was a hunter and it has been several seasons since we’ve seen her - which means she is certainly going to die.

She calls the Winchesters for help.

The Winchesters are still being dramatic with Dean drinking and listening to loud music and ignoring Jack. He’s all for hunting while Sam wants to stay and work on Jack more - he still holds on to hope that they can rescue Mary with Jack’s powers. He even gives Jack a recorded message from his mother about how he can choose to be whoever he wants to be and how Castiel will totally look out for him.

So Sam decides to call Jody and have her take this one - but Dean is looking for any excuse to get out the bunker and decides to go as well, with some more growled insults about Jack.

Jody, Dean and Missouri would make a fun team - and Missouri shows her skills right away by sensing Dean’s losses and grief. She also uses her powers to get an idea what happened and suddenly gasps a warning “James.”
James is her son and she insists he and her granddaughter Patience are the next one targetted. She tries to call him but he refuses to take her call - family issues it seems. Instead she orders Dean and Jody to go. Dean has doubts, Missouri wasn’t asking.

They go - which unfortunately leaves Missouri alone when the wraith appears - as she predicted. She’s used her psychic senses and decided this is the best way to kill the Wraith - she dies, not running or screaming, and then everyone else kills the wraith

Why she couldn’t have had Dean and Jody set a trap I do not know and it’s irritating that we’ve dredged through 13 seasons of this show to find Black women to bring back expressly to murder. She couldn’t have gone with them? They needed to kill her off? RIP Missouri, you deserved better

Over to James and Patience and we have a bit of introduction to Patience: she’s academic, serious about her education, athletic without being into sports: and she’s psychic, she gets visions.

Jody and Dean arrive to say hi to James and tell him his mother’s dead. Dean does not do this with care and sensitivity. James seems in denial about his mother being psychic but open enough to the idea of monsters and things out there that it’s clear he doesn’t outright disbelieve.

They rush to the school to save Patience as she’s attacked by a wraith - though she’s doing a damn good job of saving herself including snapping the wraith’s hand spike off. Go Patience

They have some recapping about Patience being psychic and how James said that Missouri had run out on them when really he’d cut her out of their lives because she predicted that his wife would be OK and, yeah, she’s not. Cutting your mother out of your life because she’s not a 100% infallible psychic isn’t great and Patience is especially not happy about never knowing her grandma. Ok James also has issues with Missouri being a Hunter - and as we’ve seen with the Winchester brothers and their own father (who is still the worst) that is not an easy childhood.

Plan to fight the wraith involves James’s plan to run, Jody trying to keep everyone calm and the wraith kidnapping Patience to force the point and make the argument pointless

Can we question why the wraith has killed everyone in seconds so far but is super happy to take Patience on a road trip and then tie her to a chair? Or are we just going to say “reasons”?

Reasons it is
While tied to a chair, Patience has some visions of being rescued and everyone being murdered. Oops (and shenanigans - Dean and Jody aren’t that inexperienced). The team does arrive - guided by James using some of mother’s woo-woo; yes he has complicated issues when magic is concerned. Patience is able to use her vision to guide them into killing the wraith without being brutally murders - victory.
Time for everyone to look to the future. James thinks that with the wraith gone they can all return to normal and Patience can pretend she isn’t psychic. Dean… agrees. Yes Dean is super bleak these days; he wants Patience to stay well away from the supernatural and hunting because it’s a lifestyle full of grief and pain and loss and horror.

Thankfully Jody is there to talk more sense: that she has a choice who she wants to be, that she can decide her own future. And maybe that involves going on pretending the supernatural doesn’t exist. Or if her gift doesn’t want to be suppressed and she needs to live it then embrace it. Either way she gives Patience her card and invites her to call at any time.
So we have the real point of this episode. We know the Wayward Sisters spin off is coming starring Jody Mills - and it looks like Patience is going to join them

While this has been going on, Sam has tried to teach Jack how to use his powers. But he utterly fails to move a pencil with his mind despite being able to throw people around when under threat. He’s bored and frustrated and full of self-doubt. He can’t describe how he uses his powers but is more and more thinking he’s evil since he can use his powers effortlessly to hurt people but now can’t move a pencil. As Sam pushes him to see how he’s redeemable he learns that Dean has threatened to kill Jake and has basically filled him with self-loathing

Sam puts Jack’s inability to use his powers down to him hating them, fearing them or thinking he’s evil. He also tells Jack that he’s been evil and rejected before with off abilities but that didn’t mean he couldn’t be saved

It says a lot about this show that i can’t think of which of the several instances he’s talking about here.

Sam has it out with Dean when he returns because traumatising someone who is about a week old is not ok. Sam tries to raise his own past and redemption but Dean won’t have it - he declares Sam deserved to be saved: implying that Jack doesn’t. And we spell out Dean’s own angst - when he looks at Jack he looks at the people who died: Mary (and he also suggests Sam is only pretending to care about Jack because he thinks Jack can get Mary back), Kelly, Crowley and, above all, Castiel. He especially blames Jack for Castiel because of the woo-woo he used to manipulated and control Castiel when in the womb.

All of this is heard by Jack which probably won’t be good for his self-hate issues. But he latches on to Castiel - the angel his mother said would watch over him and his powers kicks in
And in a place of complete darkness, Castiel wakes up. 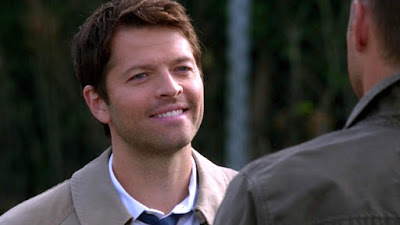 So this episode brings us some happy intriguing hints about the Wayward Sisters series including an interesting new character I’d be happy to see. And the inevitable return of Castiel. And I don’t care if it’s cliched, Castiel is back!