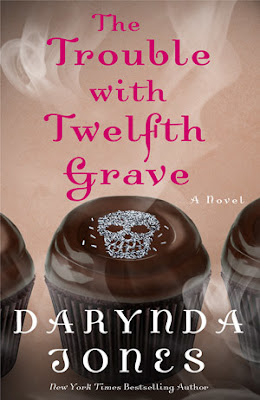 Charley has a problem. Reyes, her demonic, powerful, godly husband has finally been released from the supernatural prison he’d been locked in. But what emerged was far less human and far more supernatural and demonic than what went in. She has no idea what drives him now - and fears that ending the world and everything in it may be on his to do list

Fearing the same, it looks like God and his angels want to get pro-active in exterminating him

Trying to return Reyes to humanity is beyond tricky - especially when she’s distracted by a series of odd murders: people killed by fire and claws but no indication of to how. It looks like woowoo so of course she’s called in


Charley continues to be the utterly zany, completely unbelievable character we all know and love. She’s hilarious, she’s random, she doesn’t even remotely approach sensible on even her best day and it generally works. I think it especially works in this book - in previous books there have been moments where I think Charley, her randomness, her need to name everything etc have been taken to degrees that are not just ridiculous (everything with Charley involves ridiculousness, it is known) but also to a level which is just not funny any more.

This book managed to keep all the amusing quips, Charley’s complete lack of anything resembling an attention span, her love of Mexican food and coffee to levels which are completely inhuman, and her inability to take even the most severe moment seriously and still manages to keep it coherent

I think part of the way it manages this is Charley’s grown. I’m looking back through my list of quotes and I can’t put my finger on any one moment that I can point to as an example. But there is a definite different feel to Charley. She has always been the silly, irreverent, fun driven protagonist - but in the last few books she and the story has taken a distinctive turn. She’s a god, she’s not just a god but an extremely powerful god. She knows this - and while she doesn’t lord it over anyone or even use her extensive powers a great deal, there’s a new solidity to her. Previously she would charge into dangerous situations because she was just that reckless or because she felt there was no other choice or she didn’t think things through. Now there’s a sense of “I’ve got this” about her - there’s a confidence to her that wasn’t there before. I still can’t say how it’s conveyed, but it’s definitely there

What helps this book a lot is the much more coherent plot lines. While we have Amber involved in her own background activity and a police case, and a crime family with a grudge against Peri, one of her best friends, ultimately nearly everything is connected. In previous books there felt like there were maybe 3 or 4 plot lines, none of which were going anywhere, none of which were actually achieving anything and all would end when the book did. They were fun, but they were too many and they felt like distractions. Here we had the quest to find Reyes and the plan to try and get him back on side, we had the murders (because we always have murder mysteries) which are still connected to the Reyes hunt and we had Peri, her relationship issue and the dangerous crime family. This wasn’t connected to the others but also had enough threads to suggest a longer term plot than we’ve already seen, it certainly didn’t feel over when the book was over, exactly. This coherence of storyline may have helped focus Charlie a lot more, especially as it also allowed more time to examine what Charlie actually is

Along with the deep rich world that has used every bit of the last 12 books to build into something powerful, some really epic scenes involving Charley calling out God Himself, some really tragic scenes around Garrett and Amber - and this book managed to balance it all. Tragedy and hilarity, epic battles and irreverent naming of breasts, reminding us of the many people in Charley’s lives who matter, establishing those connections while also making silly silly plans that inevitably go Quite Awry. It works. All together it really works. While still being hilariously funny.

We do have some racial diversity - Reyes while a semi-antagonist in this book is still latino and a major character; as is Angel, though the young latino ghost doesn’t appear very often in this book. Garrett is Black and a major part of Charley’s team and deeply valued by her - and may have a special prize for being the sensible one. I like that he’s also becoming known as much for his scholarship as his physicality. Nicolette one of Charley’s more minor contacts is also a women of colour - she’s a recurring character but not a major one by any stretch. A few of the one off characters - victims, relatives of the victims, etc are also POC and there are no glaring stereotypes

One of the victims and her surviving wife are lesbians or bisexual - but they are one off characters. In previous books we have been told that Peri is bisexual but there’s no indication of that in this book: LGBTQ representation remains light. We have a similarly only small presence of Quentin, a Deaf character in this book - though we do have some nice examination and awareness of Deaf culture - and that there is a Deaf culture.

Of course Charley’s greatest friend and most powerful influence remains Cookie. Their friendship is the stuff of legends and still the most constant thing about these books. Charlie’s relationship with Cookie and her daughter Amber is even more of a core of these books than her relationship with Reyes - and it’s a joy to see an Urban Fantasy protagonist whose greatest friend and ally is another woman.


This book ends in a cliffhanger, something I would consider an unforgivable sin in many many other books. For this I let it pass because the ending was heartwrenching, powerful and unlike the last book, sets up a hook I can believe for the next novel; Charley truly had no other choice than this. It’s a brutal ending to this excellent book - but it’s all the more powerful for that