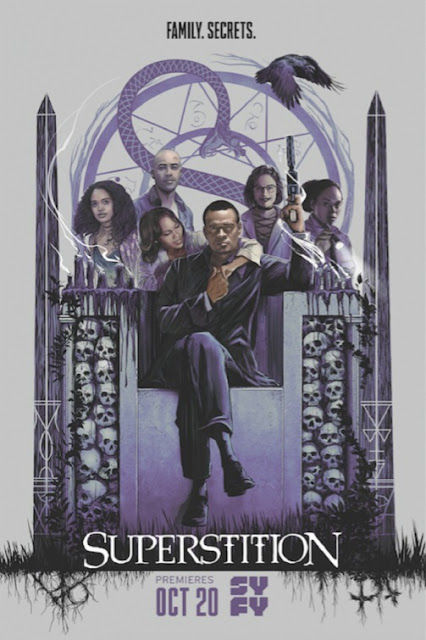 We open with a flashback and two kids running from badness in a cemetery. There’s lots of spookiness, lots of people with glowing red eyes as they run back to their parents who are locked, loaded and ready. But one child dies


The children were brothers Calvin and Arlo with Arlo being dead


Fast forward 16 years to Calvin returning home to the house after being in the army for the last decade or so - which shows just how much he wanted to run. He enters his family home and funeral parlour (the family business alongside monster hunting) and is lovingly welcomed home by his mother, Bea. And grudgingly respectfully welcomed by his dad Isaac but mainly because Bea gives him a Look.


They also interrupt a funeral but who doesn’t want a long term reunion scene (especially if it distracts from the creepy funeral where the body has been taxidermied). It’s also a nicely surreal homecoming as Bea neatly sums up how they’re renovated the house while also mentioning the anti demon measures they’ve taken - and doesn’t that perfectly encapsulate their lives? But Isaac makes his hostility clear, saying that Calvin “walked away from his life here” while Bea is quick to step in and make it far clearer she’s not standing for Isaac driving off her son.


So that’s all nicely awkward


So time to catch up with the bad guy. A man in black is using woo-woo to make snakes bite people (in a snake handling church so they kinda were asking for it, to be honest) and handing out a nasty snakey coin to one of the survivors.


In the aftermath we meet May, the Sheriff trying to bring some order to the chaos and getting the lady, Jessica home. Only at home Jessica becomes more snaky and then kills her room-mate via many many many nasty snake bites. They move her to a cell, in the dark because she can’t stand the light - and she sheds her skin. Definitely more than your average police force is expected to deal with


Thankfully May is in the Know and works with Isaac and family who she invites round to interview the snaky lady. Well, she invites Isaac round - Calvin doesn’t have clearance and is still very much persona non-grata (and Isaac makes another big display of putting him in his place). In fact, May is the only member of the police force in the know so even Isaac has to be sneaked in and out. They do find the coin and come with strict instructions not to touch it (almost too late) from Tilly


Whose Tilly? Tilly is a sassy goth coroner who looks like maaaaaybe one of the writers has been watching too much NCIS. She also performs the autopsy on the dead woman and finds she has been bitten by, pretty much, all the snakes ever despite no snakes being found on the scene. She works out of the Hasting’s house because they’re subcontracting space to the city morgue and it’s helpful to have a pathologist/woo-woo expert on staff.


She explains the coin is of Glycon the snake god and generally a bad bad thing that loves eating babies. May remembers that one of her officers touched the coin before bagging it - and he has a newborn at home - which has Calvin and Isaac charging into action, managing to save the baby from the newly snaky police officer, but Clavin having to pull Isaac off him when he kept hitting past what was needed to restrain the snaky cop. So some more issues there to unearth - it seems to be related to Calvin having visions. And his most recent vision is of his dad, dead - so anything that threatens his dad tends to make him go a bit above and beyond.


They have to scarper as May says they can’t be there when the other police arrive so they return home for some medical attention and for Isaac to update Calvin’s skills. Except it seems like more of a passive aggressive attack on how Calvin is all green and rookie and how he left. To which Cal hits back against his miserable childhood in fear of ghosts, goblins et al. They find a kind of peace when Isaac warns him everything is getting worse - putting forward his own theory that pollution et al is driving the world out of balance causing the Infernals to appear. Cal takes it darker - being at war in Afghanistan he’s not sure humanity should be saved before Isaac brings them out with a firm declaration they’ve been defending La Rochelle for 100 years


While this conversation has a lot of family drama I like the progression and growth of it. Isaac begins with his barbs about Cal running away to which Cal responds basically with “I had reasons!”, Isaac adds how things have been getting worse (implying Cal was needed) but Cal then throws in an Afghanistan as pretty strong proof that he hasn’t exactly been kicking his heels


Time for another personal drama. Garvey. Garvey works part time at the morgue, she’s May’s daughter. And Cal’s. A daughter he never knew about - and a daughter that’s epicly pissed that he ran out on her and has no time for him at all. He goes to May to talk about her not telling him about his daughter and they have… a surprisingly mature conversation with emotion but no rancour. She didn’t tell him because he ran out on them - and she didn’t want to use her baby as a way to chain him at home when he clearly didn’t want to be there. And if he had wanted to know he could have been in touch in the last 16 years. He’s not happy with her answers but seems to accept them


He goes back to Garvey but the whole “I didn’t run out on you just your mother” doesn’t exactly go down well. He wants to get over the past while she’s spent the last 16 years without him and doesn’t get why she needs him now. So, it didn’t go that well. What did go well was Isaac comforting Cal afterwards seeming to acknowledge his own flaws with Cal and making it clear he doesn’t reject his son. He also has an absolutely awesome line when Cal decides he deserves Garvey’s anger: to deserve something implies there’s a higher order to the universe, that everything is planned. There is no “deserve” what does matter is the legacy that you build - and Cal still has time for that and with Garvey. It’s a nice thawing


And back to the investigation - Bea tries to do a nubian ritual with Stella using the coin to find the Infernal - but it all goes terribly wrong. The infernal is super powerful and instead manages to infect Bea with some terrible curse which is killing her


Another stake to hunt down the infernal. Especially since he’s handing out coins left right and centre, causing utter chaos around the city.


Calvin and Isaac go to the graveyard where the infernal has been tracked - and Cal wants to go in alone because of his visions of dad dying. Isaac squishes that right away (we also learn more painful history that Arlo died because they ignored Cal’s visions) he has a job to do and Cal can’t go in there with the idea he’s saving Isaac. They enter the Infernal fog and Cal has a hallucination - his brother. Arlo claims to be stuck in limbo and wants Cal to shoot him with his woo-woo bullets to let him move to the other side. If he doesn’t Arlo will shoot him,... for a twist the hallucination is actually covering his dad - if he shoots Arlo he will kill his father. Instead he presses his head to Arlo’s gun ready to join him in Limbo


This surprises the Infernal who is impressed - someone willing to die and go to limbo rather than shoot their dead brother. Hey that’s new and interesting, he appreciates that. He also reveals that throwing the snake coins around was all a ploy to draw them out for… reasons? Presumably we’ll be informed


There’s an epic fight and we see the Hastings family has ALL the good toys - but they don’t do too well in the fight. Isaac and the Infernal end up rolling around on the floor until Cal attacks with a machete and cuts off the Infernal’s head…


..only to have the illusion fade and find that he’s cut off his dad’s head. Oh… damn I didn’t expect that. All that familial relationship all episode finally finding a level was just to lead to this? Really? That seems like a tragic waste


The infernal leaves, leaving Cal to scream his vengeance and grief after him - does that mean the snake coins are out of the picture? What about Bea?


It definitely looks to be an intriguing show, with a nearly all Black cast, a whole lot of interesting characters and a nice supernatural romp besides so I’m intrigued and in for this one. I am leery at us setting up so much between Isaac and Cal, more than any other characters, then killing Isaac


I’m up and down by the personal drama. On the first episode we had Cal clearly dealing with an epic layer of angst over his brother Arlo. We also had his clear issues with May and then that was compounded by the huge nest of issues that will come with Garvey. His relationship with his dad started, I felt, unnecessarily hostile - yes there’s clear issues with him leaving the family business, but treating him like a complete, clueless rookie who may hurt himself when he has spent the last 16 years as a marine. And then Cal accidentally killed Isaac… The angst will now be epic


What gives me hope about all this personal drama is that we have seen restraint rather than uber angst so far. Cal and Isaac did find a level of mutual acceptance and respect by the end of the episode. Cal and May again seem to have a level and be able to move on from there without a lot of huge drama.