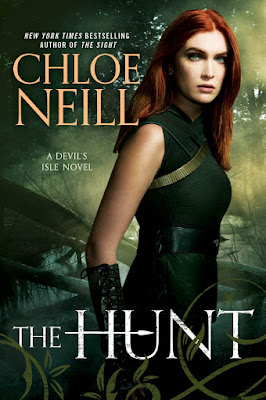 Claire saved Devil’s Island and Containment in the last book. But she did it using magic and in doing so may have cost herself everything


She is now a fugitive, a magic user who, by law, should be locked up in Devil’s Isle before she becomes a dangerous wraith. And the man she loves, Liam, was infected by magic in that battle and now seems unable to even endure her presence having disappeared for weeks.


But when a government agent is killed and Liam is framed, Claire can’t afford to give him any more space. They have to clear his name, find a murderer - and uncover a plot which may change the world - again

I’m putting aside that a lot of what I wanted to see from Claire: exploring and examining her powers, more relations with the Paras, more of her work opposing Reveillon, more examination of the difference between Court and Council, more of her relations with others. I have to say I wasn’t a fan of her romance with Liam - I just don’t really see much about Liam to make me that invested in him. When we saw him in the first book he spent a huge chunk of it being hostile to Claire, then the second book there were more convoluted barriers to this book where, again, we had barriers. The thing is, I feel lots of barriers have been thrown into Claire and Liam’s relationship before they even had a relationship. So much has happened to keep them apart I’m not sure they’ve really been together - which leaves me questioning just why Claire is this invested in it and why I’m way more interested in Claire and Moses than I am Claire and Liam.


Similarly, I’m not sure about the big familial revelations about Claire… I just wonder why it’s here. Don’t we have enough motive for Claire to be involved because of the whole world ending thing? Do we need parental angst? Does every urban fantasy protagonist need to have parental angst?


Again, these are personal taste issues - none of these stories are poor. They’re not badly written. They’re not bad stories. The emotion is deep and powerful, the conflicts very real, the writing excellent and the humanity is really apparent. You can feel Claire’s pain, there’s a lot of tension, some great scenes full of action and a real sense of building epic by the end of the book.


So, yes, I am trying not to be down on this book for not being the story I wanted it to be - instead it being the good book it was.


While I can put that aside, I am somewhat disappointed by the world building development. The world building isn’t small or even flawed not by any stretch. We have a fascinating, large, deep, rich world. We have numerous paranormal races and their different factions. We have magic and the consequences of it - from both the lifeless soil patches around New Orleans to humanity confiscating and destroying everything that may even be slightly magical - including cultural and religious artefacts. But we don’t have much of it analysed - what magic means, what it can do. How the society beyond the veil actually works? The differences between Crown and Court and their history? What about the different kinds of Paranormals? I don’t even know what some of these beings are supposed to be and no-one mentions it. I mean, is it awkward? Is it rude to say “hey this is Bob, he’s a troll?” Because Claire openly refers to Seraphs and Valkyries and this doesn’t seem to be an issue? And what does Erida being a “goddess” actually mean?


What we do have I really like - the extremely complicated and ethically dubious way that Paras are treated after the war, both the imprisonment and the “freedom” that comes of basically making them forced labour. The difficult choices, complicated further by human hatred and Court agents and both sides history is nice with its levels.


It says a lot about the book, the world building, the characters and the stories being told that my only real criticism I have is “there’s so much more you could do with this story!”. It shows how excellent these foundations are. It shows how compelling Claire is, it shows how well written the story is that I can see the stories behind the stories even if her romance is something I’m pretty indifferent about.


In terms of diversity, we’ve kind of stepped back. This book had Tadji who is a Black woman and Gunnar a gay man. But because of Claire now being an outcast from most of society she’s kind of left both of them behind. Gunnar appears to help and be a contact - but he only appears briefly and at no point in the book is there any real indication that he’s gay. Tadji, again, makes a brief appearance and we’re told repeatedly what an excellent manager she is of Claire’s store - far better than she was - but again she is sidelined by the plot direction and no-one steps into either shoes. And, especially with Erida not being a constant force in the book, and somewhat hostile and Eleanor being in hiding then Claire moves in a very very male world. Liam, Gavin, Malachi, Mose: the men who shape Claire’s life. Which is more problematic when we contrast Claire’s saintly father and… really not saintly mother.


We do have a side character referencing the United Houma Nation which suggests some strong Native American presence in the bayous of Louisiana in the aftermath of the war. We also have another minor POC character - but it’s not a lot and none are likely to recur


I love this world, I really like these characters and the stories it tells are excellent making very good use for a lot of it. I am really looking forward to the next book and the massive changes it will bring and for the further awesome exploration of this excellent creation. My criticism isn’t of the book but of its potential - because so much more could have been done with it: from the characters, the minorities and the world setting