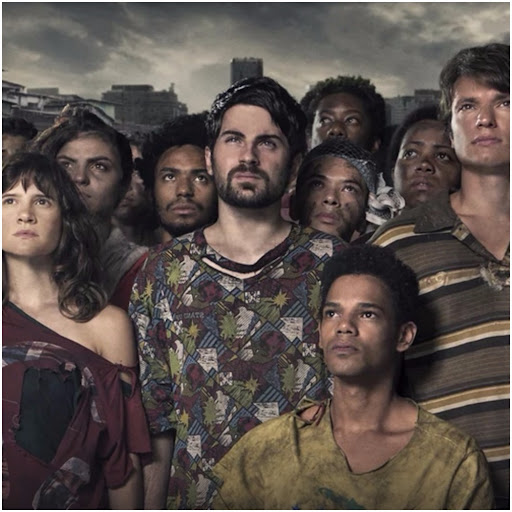 Here we are at the season finale and after grueling trials, all that remains is for the candidates to undergo the purification ceremony to complete their entry into the offshore.  Some will find the transition simple and others will have to make decisions about their future.  As with anything involving the Process, the situation isn't simply cut and dry.

Just as I suspected, Ezequiel is not going to let Michele get away with murder. Ezequiel has Michele tortured to soften her up and then starts to question Michele about why she would want him dead.  Michele is tough at first and resistant to giving out any information. Ezequiel reveals that he knows that Michele is a member of the resistance and gives a description of the man that is Michele's contact. Ezequeil knows who Michele's contact is because he was recruited by the same man years ago. Okay, I didn't see that coming particularly given how devoted Ezequeil is to the Process.

While Ezequiel is busy with Michele, Aline is making her own moves. After using eye drops to make it appear as though she has been crying, Aline bangs on her door begging to see Cesar's widow, claiming that she's desperate to make an apology.  As soon as the widow arrives, Aline drops all pretense of an apology and again claims her innocence. At first, the widow isn't interested in listening, until Aline argues that they both have a common purpose and both of them want to find out the truth about Cesar's death.

The other contestants start their day all relieved to know that there is only one step left for them to accomplish.  A happy Fernando wheels his way to Michele's door and knocks repeatedly but gets no answer.  No one he asks knows anything about where Michele might be.

In a fit of anger and despair, Michele comes clean and admits that she hates Ezequiel because he killed her brother.  This comes as a surprise to Ezequiel, because he's done no such thing. Michele of course does not believe him and so he shows Michele a video of her brother in the offshore, explaining that he might look a little different because it's been five years since Michele has seen him.  Ezequiel explains that this is how the resistance gets recruits, by lying to them about the fates of their loved ones. Given that the offshore population knows that, why wouldn't they have the people that passed contact their loved ones to let them know that they are safe and happy? Ezequiel leaves Michele alone in the room with the video of her brother playing on repeat.

The candidates are taken for the final purification step and everyone is clearly thrilled.  Joana is pulled aside and told that Ezequeil would like to speak to her privately first.  This makes her nervous because none of the other candidates are being asked to wait behind but she goes with it because what else can she do.

Ezequiel walks past Fernando, who is still knocking on Michele's door and informs Fernando that Michele has been eliminated.  Ezequiel suggests that Fernando get to the purification ceremony and Fernando follows along for awhile but then abruptly stops and announces that he is quitting the process.  Ezequeil questions if Fernando is sure and when Fernando says that he is, Ezequiel allows him to leave.  A determined Fernando wheels himself outside of the building only to find that Michele is not there waiting for him.  The woman who tasked Fernando with coming up with a new test reveals to him that Michele has not in fact been eliminated and that Fernando has been defeated by the very test that he designed. The woman heads inside leaving Fernando outside alone.  Fernando bangs repeatedly on the closed door demanding to be allowed back in but gets no response.

Ezequiel heads to see the candidates and tells them that all that remains is the purification process.  Ezequiel fully believes that the candidates have earned this position by their own merit and are now free to follow in the footsteps of the founding couple.  According to Ezequiel, the point of the offshore is merit and to that end, the final stage of purification is sterilization. Apparently, sterilization means that each candidate can be certain that anything that they achieve they have earned and not because it was given to them. It's some real faulty logic as far as I am concerned.  This however does answer the question of what people offshore do with their their children.

Done with the candidates who are moving on, Ezequiel goes to see Michele to confront her about her membership in the resistance.  The moment Ezequeil enters the room, Michele rushes towards him and demands to see her brother. Ezequiel makes Michele an offer: She must reveal how to get in contact with her handler, and in return he will personally oversee her rehabilitation and allow her to receive visits from her brother. Michele thinks about it for a time and gives up her handler. Ezequeil then gives Michele the shot which makes her infertile.

The handler heads to the space he was supposed to meet up with Michele if she got eliminated and instead is greeted by offshore soldiers.

Ezequiel has one more test for Joana.  When Joana enters the room, he has her sit in front of a window with a drape hanging over top of it. When the drape is removed, Joana can see into the next room which contains the man who almost raped her when he took her backpack; he has already been beaten pretty badly. Joana has flashbacks to the attack, as Ezequeil tells her that she all she has to do is to push a button to end his life.  Joana starts to shake and she's clearly confused. Joana reaches out to push the button as Ezequeil whispers into her ear to push the button. Joana pulls her hand back and doubles over. At first it seems like Joana is crying but in actuality she is laughing.  Joana sits up and tells Ezequeil to do his own dirty work because she is not a murderer. Ezequeil is quick to point out that this is not the case because she murdered a child but Joana will not be swayed. Joana storms out of the room and out of the facility. Outside, Joana runs into Fernando and declares that no one inside of the facility cares about them. Fernando and Joana make their way inland together. When Fernando returns home, he hears his father preaching about the original couple returning soon.

At the facility an upset Ezequiel rushes back to his room. His sink is already filled with water waiting for him to dunk his head and he pours himself a glass of the celebration wine to do the finishing ceremony that he started with Julia all of those years ago.  In frustration, Ezequeil tosses the bottle of wine at the sink, breaking both the sink and the bottle before collapsing beneath the broken sink. The mixture of wine and water pours over his face looking an awful lot like blood.

With the purification ceremony finished, Michele and Aline are loaded onto the ship first and then are followed by all of the contestants.  The mood is very happy onboard as the ship moves towards the offshore, tellingly without Ezequiel.

Joana and Fernando return to their normal lives. In Marco's old home, his maid hangs the smiling picture he took before heading off to be a part of the process.

This wraps the first series.  What we know is that people who have been deemed the 3% don't actually see anyone who lives inland as human.  It becomes blatantly obvious when the contestants are actively declared human after passing the Process.  It actually makes sense because the only way to actively oppress others to this degree is to reject their humanity.  It's something humans have actively engaged in for a long time.

With the ship finally heading to the offshore, we might finally learn something about that society. All we know so far is that the Offshore is filled with people who chose to become infertile, that it was started by some magical couple with a vision of a Utopian society  and that they don't use currency. We know that there's a counsel for leadership but we know very little about the politics of the counsel itself.

The one thing that disturbed me the most about this final episode is Ezequiel's treatment of Joana. At first I thought the test was about showing that Joana could be merciful, considering that Ezequeil is aware that Joana committed murder in the inland. Why would Ezequeil want Joana to kill her attacker? Why did he take time out to groom Joana during the Process? None of this makes any sense.  The only thing I can surmise is that though Joana quit the Process, Ezequeil still has a use for her, why else would Ezequeil not be on the ship to the offshore along with everyone else?

I also find it curious that Raphael didn't know about the sterilisation.  I find it hard to believe that every single person who has gotten to that stage of the process has decided to be sterilised. How it is possible that no one inland knows this? How it possible that no one has put together that this is why each year the offshore requires new recruits? If people were to stop sending recruits for the Process, the Offshore would simply die because they cannot reproduce.

One of the things I found most frustrating is the way that technology is used on 3%.  Aline can track Ezequeil through the streets of the offshore and even identify Augusto, yet they cannot hear anything that Raphael and Michele say about the resistance?  How did they not hear Raphael and his mother talking about how he stole his brother's identity to enter the Process?  3% really needs to simply establish some rules and stick to it. I don't buy that cameras can follow people through the inland but cannot pick up conversation within the facility itself.

Overall, I really enjoyed 3%. It's rare to see a show with so many characters of colour that isn't specifically aimed at people of colour.  I'm glad to see that we had a capable disabled character and that Fernando wasn't healed.  I did however find Fernando to be a frustrating character in that he was so willing to throw everything away for Michele.

Thus far we have no GLBT characters and considering how large this cast started off, there's absolutely no excuse for such blatant erasure. I will however say that 3% really didn't delve into the romantic lives of its cast beyond the relationship of Ezequeil and Julia and Fernando and Michele.  Even though we didn't regularly see people coupling, the fact that the only couplings were straight makes me wonder where all of the GLBT people went? It's further problematized by the fact that the eliminated contestants were encouraged to go home and make babies.  It makes no sense and reflects the bias of the authors and the producers.

I want to see where this story goes now that the candidates are headed to the offshore.  Will Raphael decide that life offshore is too good to mess with and refuse to follow through with his obligation to the resistance?  Will Fernando and Joana team up and make an awesome resistance force?  Will Aline manage to prove her innocence and in so doing end Ezequiel's power? Will Michele have to reside in the rehabilitation forever? And finally what's Ezequeil's game with Joana? These are a lot of questions that need answers.