The Librarians, Season 4, Episode 6: And the Graves of Time 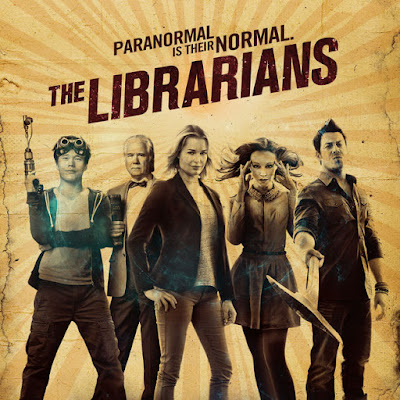 The sinister group this episode are creepy Russian grave robbers robbing graves around the world belonging to Nicole Noon; yes the ex-guardian with dubious motives

While at the Library Flynn and Jenkins are arguing. Flynn has taking Dare’s warnings to heart while Jenkins vehemently declares “screw Mr. Dare” which is surprisingly crude for Galahad. He thinks Dare’s fears are ridiculous, antiquated and paranoid and it’s ludicrous that Flynn should be dodging the tethering ceremony because of it, especially with time running out. He thinks Flynn’s real doubts come down to Nicole - and the doubts she seeded in the first episode. And hey he’s willing to debate Nicole’s guilt (which he still thinks is set) but the Library needs tethering now.

Mid argument, they realise that Eve is missing.

Eve has managed to catch up with Nicole who is trying to stop the Russians from raiding all of her graves. I think if she wanted to keep secret sites with artefacts hidden she maybe shouldn’t put her name on them all.

Eve and Nicole meet with Eve assuring Nicole she just wants to bring Nicole back to the Library, she doesn’t like leaving people behind and she wants her to be part of the team again. While Nicole is also very aware that Eve does not 100% trust Nicole and also wants to keep an eye on her. And she doesn’t need the Library to be a Guardian, she will still be a Guardian working alone. There’s a lot of competition and snark including lots of critique of each others’ fighting styles which ends up with the Russians escaping despite being thoroughly beaten. They are most snarky and I like it.

Nicole tries to run off alone but Eve makes it clear: she accepts Eve and Eve doesn’t call the team. Otherwise she gets 4 Librarians and a Custodian following her around. So it’s Eve and Nicole, not trusting but opening up a little. As Eve sees many graves of Nicole she also sees the memories and photos she stored - including all the people she left behind. It brings home to Eve just how hard being an immortal is, especially without a person to ground them. Nicole touches on her fears but Eve is clear: she IS afraid - but not necessarily of immortality but being alone. Of turning into Nicole, basically. Of course that also raises the fear that maybe the others may leave the Library and leave her

Their actual quest is to find Koshi’s needle, an artefact capable of various terribad awfulness.

At the Library everyone’s tracking Eve and Nicole - and by everyone I mean Jenkins (who doesn’t trust Flynn to be objective) and Flynn, after Ezekiel uses some computer hacking to find them. Being Librarians they quickly catch up on the trail, following them through England...

Ok, can we stop saying “just outside of Lancashire” or “she’s gone to Lancashire” because that is a completely useless direction. Lancashire isn’t a town or city. It’s a county - a region, 3,000+ square kilometers.

Also I am deeply amused that anyone thinks a beverage of choice in Lancashire is “cucumber water”.

...through to Rome and then Ukraine outside of Chechnya - so as Eve and Nicole climb a cliff they find Flynn and Jenkins already there (the riddle closely following the legend of Koschie)

Jenkins believes Nicole wants Koschei’s needle because it can kill an immortal: assuming it’s part of her revenge against him. While they argue, they have to run from Ukrainian military and Eve and Jenkins get caught by the Russian treasure hunters

Flynn wants to intervene but Nicole shows a very Derrington Dare slant -the mission comes first. But she mixes this with an insistence that Flynn doesn’t have to baby Eve, he can trust her to get herself out of trouble without him

Which I guess is a point… and one Nicole/the writers have tried to force with references to “doesn’t Flynn let you do anything without him?” But it doesn’t follow. Flynn has never really shown a over-protective/smothering side towards Eve. In fact, as I’ve mentioned often, a large amount of the last 3 seasons are spent with Flynn off doing his own thing and leaving Eve to handle the Library and other three Librarians. Flynn has shown nothing but confidence that all the Librarians can look after themselves - including Eve. This is a moral lesson no-one needs. Also she’s been kidnapped by evil people with weapons and is tied up - declaring “oh hey I have every confidence in you” is more than a little broken and self-serving. They’re a team, they work together, having each other’s backs isn’t the same as treating Eve like a Damsel in distress.

Instead Nicole and Flynn find the dagger while Nicole also encourages Flynn to branch out in his life: she points out his whole life revolves around the Library making him it’s “prisoner” and closing off his potential…

In short - the Library not only gave Flynn a purpose, but it’s a purpose so perfect for him I can’t imagine a replacement. Also he’s in a relationship with Eve

This also leaves Eve and Jenkins to listen to the bad guys sinisterly describe how bad Nicole is, and how they (the very very obviously evil ones) are totally the good guys really while Nicole is just terribad awful and taught black magic to Rasputin! They need Koschie’s needle to save the world from her naughty bad evilness.

So when Nicole and Flynn find the dagger they’re quickly stopped by Eve and Jenkins who declare Nicole super evil and the dagger must be kept away from here and instead handled close to evil Sinister guy who promptly grabs said dagger and uses it to stab Nicole. Why, the obviously evil guy is evil!

He’s also Rasputin, said dark magic using Russian immortal monk - as we see since Koschie’s needle absorbs life force and gives you some killer hair extensions. Jenkins (full of woe and guilt) gets Nicole back to the Library for some woo-woo while Eve and Flynn defeat Rasputin by making him stab radiation.

I’m not even poking that, just run with it.

Back at the Library, the guilt ridden Jenkins does the one thing he can to save Nicole - gives her his immortality

Jenkins doesn’t die - but Jenkins is now mortal and will presumably age and not be indestructible any more. I disapprove

Still it means Nicole can now forgive everything and go her merry way without the Library dominating every aspect of her life. She declares herself free. And urges Flynn to do the same

Which despite all my objections above, Flynn decides to do. Leaving his tethering ring, a note, taking his things and “retiring”. Which means abandoning Eve without even saying goodbye, to say nothing of the other Librarians or Jenkins. I call shenanigans

Ok, so all my musing last episode? Well I’m leaning towards this being resolved by Flynn actually leaving the show entirely which would definitely address the balance issue. Or, more likely, I think this is basically another reason to keep Flynn out of the battle for the rest of the season.

The problem is that the way it’s been done - Flynn, his motivations, all feels… a bit dubious? It doesn’t feel logically consistent with Flynn’s character

On a related note - the deep tragedy of Jenkins losing his immortality may also be a way of focusing back on the core four - Jenkins being active and out in the world is awesome, confining him more to the library without his immortality prevents us having more episodes of Ezekiel, Stone and Cassandra being relegated to the library. So I’m guessing a general refocus on those who are supposed to be the core of the show while fighting against the overwhelming presence and personalities of the supposed side characters