The Year of the Knife by G. D. Penman 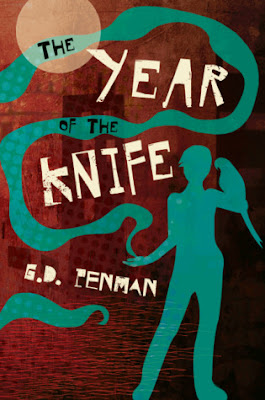 Oh wow there is such a lot here. So very much here.

We have a completely amazingly different alternate world. A modern day British Empire - with all the issues of Imperialism and Colonialism attached and examined. This isn’t some excuse to just play with the aesthetics - the Empire is not a benevolent force by any means (though there is some fascinating complexity there. I love how while definitely an issue, it also stands out as one of the few nations that don’t brutally persecute vampires). But also with magic and demons equally drastically changing the shape of the world. From the United Nations of Native Americans who most certainly have not been conquered, to mainland Europe badly overrun by demons. On top of this we have a definitely steampunk aesthetic which is always beautiful and fascinating

We have a complex and fascinating magic system with so many possibilities and implications - from how magic is used in the Industrial Revolution to how powerful mages are treated, to the maths and formula talented and skilled magic users perform while at the same time having some excellent takes on how magic is treated in different regions, different talents and how they can certainly match or surpass more formal training.

I can’t stress enough, the breadth and fascination of the world building, the different nations, the different branches of the government and forces, the

To that we have some awesome action scenes, lots of exciting and dramatic magic, a brutal and terrifying police investigation with lots of mystery, lots of battles and some generally excellent, fast paced writing (generally, I’ll get to that) and some really genuine creepiness as well.

And my gods there was a definite twist there. A truly excellent twist that brought all the myriad plot points together truly awesomely.

Our main character, Sully, is powerful, intelligent and capable both as a magic user and as an investigator. She doesn’t have any real respect for authority - but that doesn’t make her a mouthy rebel without purpose. She’s passionate, excellent fun and a definite force to be reckoned with. She’s an excellent protagonist. And she’s a lesbian, and she’s sexual - both casually and with a long term albeit fraught relationship with another woman. And there are definitely issues with their tumultuous relationship it is nothing to do with their sexuality and far more to do with vampirism and commitment issues and previous bad experiences.

The pathologist is a fascinating and eternally curious Indian man, her main conspirator and fellow researcher into the murders is a deeply academic, ferociously intelligent and amazingly well connected, politically astute Black man. One of her fellow cops and one she most relies on is a definite Man of Colour and we have a presence from the United Nations - of Native Americans. It’s a definite diverse book with clear depictions of minorities, all alongside ongoing examinations of persecution, imperialism and even how, for example, Sully can awkwardly fit in the system as an IBI officer and give people a heads up who may be hurt by the system

Do I have a criticism? Generally no. Seriously. There IS a moment in the middle of the book where it all kind of slows down a bit. But I don’t think this is necessarily a problem - but a reflection of the police investigation and the frustration. She’s chasing down leads which are going nowhere, getting distracted by other cases and generally stalling. I think that’s deliberate but there is a sense of “nothing is happening! Nothing is going anywhere!”. But even that is less of a problem because Sully, her relationship, the exploration of demons -a ll of these are excellent addictions to fill this frustrating time. Honestly it’s more my need to have a negative than anything else that makes me mention this. It’s an issue, but my gods as far as issues go it’s minor.

This is an excellent book with amazing characters which in any other book would get masses of fulsome praise from me but in this book manages to be eclipsed by the even more awesome world setting. We have an intriguing plot, awesome writing, a diverse cast and some real blood fizzing action. Bring on the whole series!

And... I am deeply depressed that there's no indication of a series here