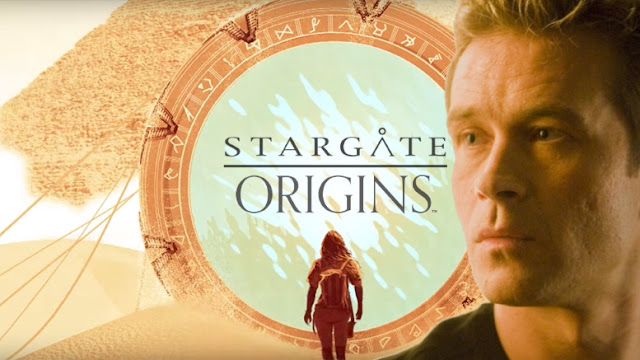 Ok, full disclosure before I begin this - while I’ve always been sort of intrigued by Stargate and caught several episodes, I came to it late and never really set aside the time to catch up on the sheer size of the whole thing. This leaves me aware of the franchises and the basics of it, I know what a Goa’uld is, who Norse Mythology got added in there and a few of the characters but not much beyond this. I looked on this release as a way to enter the franchise without necessarily needing to know a great deal about it given it’s a prequel; but don’t be surprised if I miss more than a few Easter Eggs along the way - do feel free to draw my attention to them in the comments.

So we have Catherine Langford and her dad Professor Paul Langford who have found the Star Gate at an archaeological dig in Egypt. And they’re all enthusiastic about it until 10 years go past, she grows up and they still don’t know a single damn thing about it. Understandably their funding is getting cut because no-one is going to keep paying for a vague shrug and “I dunno”. You can’t write many papers on that either

We also meet Captain James Beale, a British soldier and impossibly pretty man who is sort of dating/courting/whatever you call it back then her. And his friend Wasif, an Egyptian man and another soldier of the British Empire who is largely dragged around by James and forced to do what Catherine wants because James does in an attempt to impress her rather than rely on his great prettiness.

Catherine and her dad’s scholarly confusion is interrupted by Nazis, which just ruin everyone’s day. Nazi Dr. Brucke, his camerawoman Eva and some collected Nazi extras swoop in with guns and menacing threats and generally speaking accented English but occasionally speaking subtitled German… which really I’m going to need Starget Origins to choose. Either have your characters speak accented English and let us assume they’re speaking German, or have them speak German. Otherwise we have weird times where all these Nazis are speaking English to each other

These Nazis capture everyone and hold them all at gunpoint and try to play the whole civilised monster schtick. Dr. Brucke has done his own research and has basically figured out what the Stargate is, how it works and how to make it work.

So, the Nazis force Langford to go with them while leaving a token Nazi behind to guard Catherine since Catherine’s safety is being used to convince Langford to be borderline useful. There is lots of creepy touching her and she bites him and he slaps her and it’s all kind of cliched. Someone needs to say “I likes a girl with spirit.”

They leave her with the weakest of Nazis and she escapes, how surprising.

Through the Stargate they see lots of Ancient Egyptian decoration and Langford is all shocked and in awe to see it all. While the Nazis wants to meet the locals while Langford is confused about the idea there are people. Despite obviously maintained locations and wall hangings

I’m beginning to doubt Langford’s skills as an academic. Or deep thinker.

They do explore and come across two women with a baby, one of the women is clearly a Goa’uld. Langford tries to greet her in broken Ancient Egyptian - and assumes they’ve time travelled if she speaks it. Again, the Nazi corrects him and Langford’s academia seems… limited

But so is the Nazi’s patience - and orders one his men to seize her. Obviously that does not go well and he ends up dead when she unleashes some Goa’uld tech and then speaks in the ominous echoy Goa’uld voice. Langford finally shows some common sense and kneels, along with Eva the camerawoman. She pulls Dr. Brucke into a kneel as well because she’s no fool and recognises a goddess when she sees one. This will not end well

Back on Earth, Catherine recruits James and Wasif to come help her; though she turns out not to need it, happily beating up the Nazi on her own (but did we need to show him wearing women’s underwear as a cheap emasculating laugh. It’s 2018 can we get past this? It’s puerile).

She then has to convince James and Wasif to help her activate the Stargate. James will of it because he has a crush on her and he’s willing to beg Wasif to help him for that reason (he outright asks him to humour her which she objects to). They activate the portal and when they hesitate, she pushes them both through.
I’m not convinced by this 10 minute minisodes, to be honest - one of the reasons I’m generally not a fan of webcontent. On the other hand, releasing three together works - because 3 10 minute webisodes with no temptation to recap (which would be super annoying)

But still, while I normally have some preliminary thoughts (though duly reserved because a whole lot of shows know how to start well before jumping into awfulness) about a new series and… I don’t? I’m intrigued to see if Wasif becomes more of a character, I’m vaguely questioning if we’re going to go all Indiana Jones here with some disposable Nazis… but these are more my running with possibilities searching for a point and something to say more than having sometimes to say.