Lillith is doing some bizarre plotting - she’s visiting Magnus because she wants to buy a potion of falling out of love. So she can give it to Jace and he can fall out of love with Clary and then be her manipulated toy so she can bring back Sebastian and then kill Jace and unleash her evil laugh. And maybe have sex with Sebastian. I have no indication she wants to do this but this is Shadowhunters so, y’know, incest.

Anyway the downside is that this potion requires a shard of your soul which is somewhat unpleasant. It also means that Lillith needs to get a shard of Clary’s soul and put it in Jace’s drink

Or she could just murder both of them. I mean, really, why do bad guys always have to have super convoluted plans when some simple murdering would make things far far easier?

First of all she summons a demon to go find Clary’s soul but that fails because the demon decides to attack Izzy instead and get all murdered. It surprisingly saves Izzy’s date - she’s having a date with the hot doctor though it’s somewhat awkward because she has absolutely no human experiences. When she leaves to fight demons he finds her injured and he treats her injuries (which she fakes as being caused by a broken heel). This relationship has limited longevity. Also Shadowhunters live super super sheltered lives. 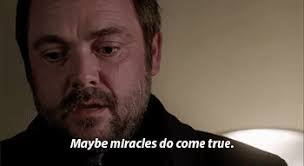 Of course Clary is not having this nonsense and instead decides that his issues may be down to the wish she made with Razuriel to resurrect him because this makes his issues more about her. Sio she goes to Luke who is completely ignoring his Pack again to ask him if he can pull his sister out of the plot box. For those whose mind shut down to defend themselves, Luke’s sister, Cleophas, is an Iron Sister which means she makes the Angelic weapons. Only she joined Valentine and then not and became a True Follower of The Awesome Clary and then is banished to a farm somewhere because Clary doesn’t actually find her useful. Luke better watch out there’s room on that farm for him too.

After hugging Clary and declaring how horrible she is, Cleophas fears she can’t summon angels any more because she’s so terribad awful. But Clary the pure and angelic can do it. Of course she can.

And she does - summoning Ithuriel the angel who doesn’t say “girl, do I look like the help to you?” about being summoned, but is all magnanimous and tells her that actually, no divine resurrection doesn’t come with memory loss. Actually it’s the big evil thing that has been unleashed which the angels didn’t bother to mention this before. And when he tries to elaborate, Lillith arrives in scary demon mode and rips out his heart

Angels die dramatic as well. And are you happy now, Clary? First you wasted the world’s one divine wish on Jace and now you got an angel killed over him!

Lillith then steals a bit of Clary’s grace and doesn’t murder Clary. For Reasons. Whatever. Who even knows? Seriously bad guys you really need to kill people already.

Shall we catch up with Jace? Well he’s day drinking and trying to help Simon figure out who is sabotaging him by cancelling a gig. Um… Jace is the one to investigate this very real world issue? Jace? The man who doesn’t know how restaurants work?

Jace meets Simon’s room-mate Simon and quickly realises the whole apartment has been designed to be a giant bait for Simon. It’s too perfectly set out to appeal to him. So he searches - and checking Ryan’s room he finds that a) all of this junk is in the common areas only and b) finds wolfbane which of course means he’s a werewolf because this plant only ever exists around werewolves?

They confront Ryan but when Jace learns he’s Praetor Lupus he’s fine with this because they’re a good and honourable organisation (well, as far as Shadowhunters think any downworlder is). Simon is less amused. He doesn’t want to be protected by people who lie to him and doesn’t want to live with someone that willing to manipulate him. And someone willing to sabotage his music career to “keep him safe”

He leaves, preferring to live in his van and busk than live with Ryan - and I applaud. Another decent decision. Except Jace intervenes and offers another solution

Let Ryan protect him… but on Simon’s terms. Which sounds empowering but it’s… weird? I mean “let” someone serve and protect you? “Let” someone let you live in their awesome flat. This whole weird element of Simon doing Ryan a favour here is just… weird? I need a bit more of this relationship developing

Speaking of relationships - to Magnus and Alec. Who are still doing the three feet apart at all times thing, again. At least they are kissing more but it’s WEIRD how much space there is between them


They’ve been together for like 2 months. Slow your roll Alec, this is waaaaaaaaaaaaaaaaay too soon for this milestone

He also notes Magnus looking in a box so he decides to snoop - and finds a picture of a man with love note on the back. Jealousy time.

Back at the institute, another Shadowhunter tells Alec how very inspirational he is… presumably for being an out gay man? I mean it’s weird that he’s so praiseworthy and saying Alec is setting an example without actually saying those words?

His admiring of Alec’s relationship reminds Alec that snooping is naughty. He goes to confess to Magnus who already knows because, y’know, magic. Also if you apologise for snooping I think it’s kind of not ok to then ask questions about what you snooped? I feel if you’re admitting you failed to respect privacy you then really need to make a point of respecting that relationship.

Magnus reveals that the box is full of many many momentos from people he loved before. Alec is jealous and says, in an actual painful moment, that the best he can hope for is one of his arrowheads in the box. Magnus lashes back that this is not an option here? He’s an immortal - outliving his lovers is going to be an inevitable and we have some decent pathos here. But also means we’re finally focusing on this relationship long enough for it to be heading towards a trainwreck

Ok, Alec and the inspired shadowhunter scene… This would be a beautiful scene if it weren’t for the rather lack of foundation. This is a problem we had with the books before and previous seasons: when convenient (like here where we have to have Alec reminded that his relationship is special and he’s just been a bit of an invasive dick) for the story, we present Shadowhunter society as deeply homophobic. This is why Alec is closeted, crushing on Jace and nearly ended up marrying a woman. But when it’s not convenient that homophobia disappears: like no-one actually objecting to Alec’s relationship, him being honoured by the Clave, allowed in various institutions and even made the head of the Institute. He says he spends every night at Magnus’s house and he doesn’t even get a snide remark? His mother is three steps away from joining PFLAG.

This is kind of the whole problem with all of this relationship. I mean I love that we’re actually seeing more of Alec and Magnus finally - but there’s very little about their relationship there.They just have a scene together, usually speak about someone not present and maintain that space. And the scenes nearly always involve one or both in the process of leaving. We need foundation more than placemarker
.
The kisses are good (the space not) and them actually spending time together is a massive plus; but we have issues