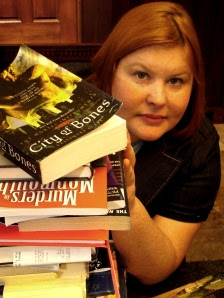 There are two problems we see a lot in looking at Urban Fantasy from a social justice mindset. One is the defenders of books and series rushing in to decry any criticism of their precious - and I can understand that. We fanpoodle in Kevin Hearne’s name after all. But when fanpoodles deny that there are problematic and prejudiced elements in their favourite works, they diminish and demean the damage these portrayals can cause and internalise them without thinking

The second is the repeated acceptance of token characters - even high problematic token characters - as being proof of inclusivity. Just having a POC/GBLT/Disabled/Female character is proof that the book/programme is inclusive and wonderful. Would that it were true, but as we’ve discussed before sometimes erasure is better than some inclusion.

Which brings us to Cassandra Clare’s novels that are repeatedly hailed for their gay inclusion and any questioning of the portrayals has been vehemently opposed. And as we did with similar sentiments expressed about Laurell K. Hamilton’s Anita Blake, we have to speak on this. Because this inclusion? This is not all good.

Alec exists to serve the straight people around him. Despite being older, he has far less kills than Issy or Jace (and Clary mocks him about this as a sign of him being weaker) and it is said this is because he exists to protect them - gay people existing to protect and serve straight people is no less problematic than gay people being weaker than straight people. There are at least 2 occasions in the books where he severely risks his own life to protect Jace. On top of that, Alec being gay is used as a reason for him to fawn after Jace - be jealous of Clary and desperate for Jace's attention - the gay man pining pathetically after a straight guy is an old trope and it’s a dull one that needs to end.

While Alec is portrayed as self-effacing, whiny and weak - especially compared to Jace and Issy, Magnus embodies different tropes. For a start, if Magnus were portrayed as any more flamboyant he’d wear rainbows and shoot unicorns. And, like Alec, he is there to serve. We are told repeatedly that Magnus is an extremely powerful being but. when the straight people call (Jace and Clary) he is quick to not only respond to their requests, but comply obediently. Like Alec, he exists to serve the straight people even though he normally charges a considerable amount for his services. The only time he is portrayed as dominant is when he is juxtaposed to Alec, thus making fulfilling the endless trope of having him the top and Alec the bottom.


Alec & Magnus’ relationship has much of the “weak child/male parent” dynamic that is so common in slash circles (trying to clumsily impose clumsy gender dynamics or grossly offensive yaoi style “ukes” and “semes” into gay male relationships). Especially in the last book, Alec is whiny, childish, pettish and inclined to sulks and tantrums while Magnus chides him like a sulky child.

To make matters worse, we are told that the Nephilim are extremely homophobic and will reject Alec. This is why Alec is closeted to begin with. But the moment that Alec kisses Magnus in public, it’s all rainbows and flowers because the supposed homophobia immediately disappears. From there we get "aren’t they cute". When cute is applied to same sex couple it is typically meant to reduce the seriousness of the relationship. It further makes it seem as though all gay people need do is come out to be accepted, and ignores how often they are completely rejected by their families, to the point of being thrown out of their homes. It also very much puts the onus for homophobia on gay people - if we just came out it’d all be ok! If we just came out, homophobia would disappear! It makes homophobia a phantom of gay brains, a paranoia almost - rather than a very real and dangerous thing that doesn’t just disappear because the closet doors are pushed open

And speaking of the Nephilim’s homophobic society, we have not only the idea that all prejudices goes away as soon as we come out, but it also shows how homophobia is treated as a plot device. Alec lives in a homophobic society when the plot demands it! And when the plot doesn’t? Well we can just turn it off, right? This is perhaps the most offensive thing that Cassandra Clare does in this series. When it’s necessary to have Alec to be the tragic closet case who fawns after Jace and acts as their tool and support, we have a grossly homophobic society where the very suggestion of Alec being open makes his sister gasp about dire consequences. Yet when it becomes useful to have Alec open and out (because then he can drag their servant Magnus around more easily) then suddenly ZING, all homophobia is gone! Turn it off, it’s not useful any more. Sadly, in the real world we don’t have the convenience of turning societal prejudice on and off whenever its useful to us

Which of course brings us to another problem - the appropriation of the closet. I cannot describe the amount of cringing I did when Clary was handing gay rights pamphlets to Simon about “coming out” as a vampire. Cute, using coming out, one of the most fraught periods of our lives, as such cheap and rather ridiculous humour. To be fair to Cassandra Clare, “coming out” is often appropriated in Urban Fantasy as part of the problematic trope of “supernatural beings facing prejudice” idea, but Cassandra Clare went that next step by not just using “coming out” but by taking what sounded like an entire PFLAG pamphlet.

Clary, a manifold problematic character, instantly and mystically sees that Alec is gay - special Clary gaydar it seems. Despite Alec being closeted in an extremely homophobic society - Clary can see! And on seeing that? She uses it to attack Alec, to ridicule him, to put him in his place beneath her. She’s complete stranger, a guest in their home yet she puts Alec down and in his place through homophobia. This does not come down to a strict claiming of Jace but an absolute rejection of Alec’s identity and his long history with Jace.


And do I even need to cover the exchange of postcards in which Isabelle teases about planning the most ridiculous wedding for Alec and Magnus? These postcards existed entirely to be a long running joke of stereotype after stereotype. I mean, really, has there ever been such a collection of stereotypes in one place? Surely they should ride to the altar on rainbow coloured unicorns covered in body glitter and exchange linked mars symbols instead of rings! When we consider the ongoing struggle in the U.S. for same sex couples to gain the right to marry this is not only extremely insensitive it smacks once again of reducing the oppression that the GLBT community faces.

Recently, in relationship to Clare’s latest book there has been a lot of angst over the suggestion that Will Herondale might in fact be gay because it was mentioned in (Mortal Instruments?) series that Magnus had a relationship with him. Supposedly Will and Tessa belong together forever and ever more. “OMG is Will gay?” has been the outcry from the fanpoodles since the release of the book. This is problematic in two ways: Will could be bisexual and Magnus is in fact bisexual because he has relationships with both men and women and yet the erasure of this is not only commonplace it’s biphobic. The idea that the fanpoodles don’t want a possible romance between Tessa and Will ruined, tells me that the excitement with Alec and Magnus is only acceptable because it does not interfere with a straight relationship, thereby once again privileging heterosexual couples. Keep in mind that these are the same people gushing over Alec and Magnus that are actively participating in this angsting homophobia.

To talk about the homophobia in Clare’s work is to risk being attacked by the fanpoodles. In all of their “awww they’re so cute” in reference to Alec and Magnus, they don’t realize the ways in which Clare is being paternalistic in her treatment of all the gay, potentially gay, and bisexual characters in her story. Just because you are a fan of something, does not make it right to ignore the way that it perpetuates isms. We all occasionally will say, “to hell with it I like it”, but the decision should not be done without fully acknowledging what you are internalising and how this is harmful to marginalized people.
Posted by Sparky at 9:00 AM

Clare was a Big Name in Harry Potter fanfiction, despite the fact that she was a known plagiarist who couldn't write a story on her own merits to save her life. Her whole sorry history is a sickening one if you search for it on the net, and it's pretty disgraceful she's gotten so far.