Review of "Cheat the Grave" by Vicki Pettersson 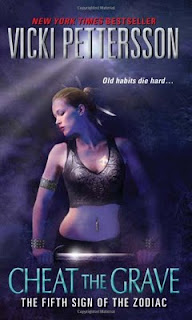 To be honest, I have been struggling with this series.  It started off wonderfully engaging, with a world that was absolutely unique in urban fantasy, and then somewhere along the way, it seemed to lose focus, that is until Cheat the Grave.  This book reminded me of why I fell in love with the Zodiac books to begin with.

Now that Joanna/Olivia is mortal, the forces of light see her as useless, and to make matters worse, Solange has sent Mackie the piano player from Midheaven to kill her.  If the Tulpa and the shadow hunters figure out who she really is, they will kill her.  Everywhere she turns, someone wants her dead except for the rogue agents (the greys).  Somehow she must protect the mortals she loves, and chief among her concerns is stopping Suzanne from marrying someone she suspects has nefarious intent.

The fifth sign of the zodiac was filled with the world building that the last two books lacked.  We learn more about why Hunter was such a threat to Warren, and a bit about Warren's motivations.  He was still not painted as a sympathetic person, and in fact -- we understand even more clearly that he is no different from the Tulpa.  Warren only saw himself as better, because he is fighting on the side of the Light, but if you are willing to sacrifice people, erase memories, and manipulate lives for a single minded purpose, does it really matter what the goal is?

Cheat the Grave was far more introspective than any other book in the zodiac series thus far.  It was masterfully written, and unlike many books in this genre, Olivia/Joanna continues to be likeable. Every angst filled emotion that she had was justified.  Her entire life had been taken from her and when she finally felt that she was on secure footing, everything that she knew was ripped from her again.  She was a woman trying to understand the world around her, and for the very first time not following orders but deciding for herself what her goals were and what would make her happy.

This book was all about agency in it's truest sense.  The Greys wanted the chance to settle down and not to be actively hunted by both sides and this determination caused Joanna/Olivia to understand that the binary approach to life i.e warriors of life vs Shadow warriors, was not really balance, and that it would not ever lead to real happiness.

Life happens in the grey areas, because that is where we are able to take control of the world around us, and make decisions for ourselves.  Moral absolutism, even if ones intents are good, is destructive.  It is this realization that made Warren hate her so. Her freedom directly thwarted his control and in this we see gender dynamics at play.

It fascinates me that the Zodiac is a matriarchal society and yet the Light is ruled by a man (Warren) and the dark is also ruled by a male (the Tulpa) The only place that women rule is Midhaven and Solange the most strongest ruler there is obsessed with power and killing Joanna/Olivia because of her soul connection with Hunter/Jaden Jacks. If women are so powerful, why is everyone following male leaders?  Why is it that women can only rule in a separate earth?

In Cheat the Grave, we learned that the Archer may not be Joanna/Olivia, but Hunter/Jaden Jacks' child with Solange, and either way that means that the way the world is constructed will pivot on the life experiences of a single woman.  It bothers me that in a matriarchal society that women still have to go through a man. If that were not enough, throughout the book, Pettersson has Joanna/Olivia say some very negative things about sex workers.  To me, it's as though Pettersson has so internalized patriarchal values, that a true matriarchy is something that she cannot fully conceive.

I was absolutely fascinated by the mother daughter dynamic in Cheat the Grave.  In The Scent of Shadows: The First sign of the Zodiac, we learn that Zoe Archer gave up her power for Joanna/Olivia, and then disappeared.  In her absence she created a second tulpa to battle the shadow tulpa and has basically been manipulating things.  Joanna/Olivia is plagued by her mother's absence, and attempts to force her into revealing herself.  In the end, both women must choose between being with each other or following what they believe to be their destiny's.

Mothers are constructed by society as self-sacrificing, and this is the model that was set up for Zoe at the beginning, but in the moment of decision, we learn that mothers are more than just vessel of giving and nurturing; they are individuals with agency, capable of making the tough decisions.  Loving your child does not always mean standing at their side, sometimes it means letting them go to pursue your own desires.

Once again, this book contains no GLBT characters however, Pettersson did decide to add a few characters of colour.  Normally in this genre, when a character of colour is introduced, the reader is reminded repeatedly that they are of colour, and this usually takes the from of extreme descriptive passages. I am relieved to report that Pettersson did not resort to this tactic.  I will however say that it is problematic that all of the characters of colour are either in Midhaven, or they are members of the Grey. This specifically sets them up as outsiders, and when we consider that this story is set in Las Vegas, it's ridiculous.

Even with the obvious erasure and the issues involving gender, this book is great.  I read it straight through, stopping only for bathroom breaks. Pettersson has reminded me why I love her work and I am very anxious to see how this series ends.  I can see the various threads that she has drawn coming together beautifully to create a work of art.