Review of Vicki Pettersson's The Scent Shadows: The First Sign of the Zodiac 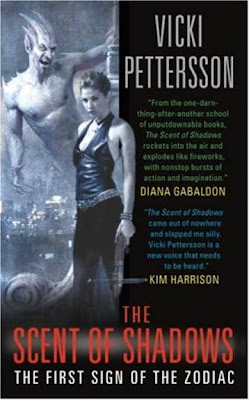 I know that some will argue that this book does not fall into the category of urban fantasy, because it does not involve, fae, vampires, werewolves, or any of the other usual suspects; however, I am going to call this urban fantasy, because it takes place in Las Vegas, which is an urban setting. I know that this is  thin ground to stand on, but I am going to nonetheless.

The Zodiac warriors actually have powers and special weapons assigned to them based on what astrological sign they are born under.  Joanna, the protagonist, is The Archer because her mother was a warrior of light and her father a warrior of the dark, and she shares her birthday with her parents.  Her birth and ascension was foretold in their mythos, which btw can conveniently found in comic books written about them. Joanna refers to herself and the other agents of light as super heroes.

The story is actually quite intense and the world building quite subtle.  I really do believe that Pettersson did a wonderful job writing the first book in this series.  From early on we learn that Joanna was raped at 15 and left for dead in the desert. Her mother for reasons unknown leaves town, never to be heard from again.  Joanna now only has her younger sister Oliva and her father Xavier.  Of course, the relationship between Xavier and Joanna is contentious, and finally we learn that he is not really her biological father. No, her real father is the Tulpa, the leader of the dark forces. The Tulpa is a being who was specifically brought into being through deep meditation for years by a man seeking to create his own religion.  Xavier quickly disinherits Joanna when he learns the truth of her parentage in favor of his daughter Oliva. Unfortunately for Olivia, she will not have long enough to be her father's heir, as she is murdered by Ajax, an agent of the dark forces.


I could go on, but to do so would fill this post with spoilers, and The First Sign of the Zodiac really needs to be experienced unblemished.  Like any other book in this genre, it does have its failures, which in many cases make no sense.  As I mentioned earlier, the book is set in Las Vegas and yet we don't meet a person of colour until almost 200 pages into the book.  Of course she is sassy as can be and this somehow is a reflection of her power.  When I consider how Pettersson treated the one inter-sex person in her book perhaps this is a blessing in disguise.

When we first meet Chandra she is immediately misgendered by Joanna.  We are lead to believe that this kind of thing happens all of them time, and that though Chandra is justifiably angry about it, that she really should just suck it up.  If only this cissexist clusterfuck had stopped there -- but unfortunately Joanna went on to say:

I could tell he ans the rest of them, thought I wasn't going to be able to handle this angry little hermaphrodite (256)

To kick my ass.  Yes. I know. Then what? Climb a tree and start thumping your chest? Scary stuff, She-Man. If you can back it up (Joanna to Chandra) pg 259

I have to say that the treatment of Chandra though not surprising, was disturbing.  This is the first time I have come across a gender non-conforming person in the urban fantasy genre, and to see the cissexist tropes reproduced simply to advance the plot and elevate Joanna, the protagonist, was vile. It's bad enough that Chandra was essentially forced to play the role of sassy side-kick, when Joanna came along and was revealed as the real archer, but to use medical terminology, rather than the preferred term of intersex in this manner, without a single character in the story calling Joanna out, tells me that Pettersson is more than fine with her cis privilege.

When it comes to Chandra, I really do believe that Pettersson would have done the intersex community a solid by simply not making the character intersex.  This falls under the category of erasure being better than inclusion, if I have ever seen one, and therefore part of the continuing compromise that marginalized people have to make in order consume any media. All Pettersson had to do was have one character tell Joanna not to refer to Chandra as hermaphrodite, and Chandra's personhood would have been respected.  We should not erase isms because they are part of our social world, but I believe that every writer who includes marginalized people, has a responsibility not to perpetuate them by having them understood as completely acceptable.

I understand that because of her rape, and the fact that her entire life was ripped away from Joanna, that she is angry, but the way in which her anger manifests sometimes comes across as ridiculous.  She is told not to let anyone know her true identity, and yet as soon as she crosses over, she has to be stopped mid sentence from revealing who she is. She is told not to display her martial arts ability, because it could signal her true identity, but when goaded by Chandra, who rightfully is upset with her after being misgendered, she becomes a one woman fighting machine.  Finally, after living with the traitor for years, it is Joanna who is able to ascertain this person's identity, and not the light warriors.  As female protagonist go, these character traits are normal, even if they are occasionally irritating.

This book is definitely worth reading, but one should really do so with awareness that not only are people erased, they are actively oppressed. This is certainly a reflection of the pyramid of hierarchies that we live with, but they only serve to detract from the plot, and make not only the protagonist, but the story a little less likeable.