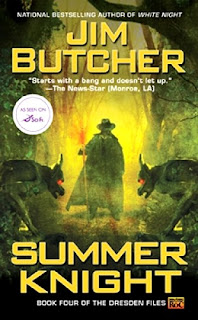 Harry Dresden returns in a much more epic tale of battle and mystery in which the fate of Chicago – in fact the whole world, rests.
Epic. I do like me some epic, I does. And we have meta-plot! In the last book, Harry Dresden started a war to protect the woman he loved and to stand up to the cruelty of the Red Court of vampires. Due to his actions the Red Court declared war on the White Council, the ruling body of wizards, a war that now covers every part of the world and concerns the White Council greatly as important wizards fall in battle. The Council has come to town and Harry's detractors are eager to end the war by sacrificing Harry to the vampires.
But there is a way out – the White Council has approached the Summer and Winter courts of the fae to gain allies and free transport through the Nevernever. Harry, as the newly appointed emissary of the Winter Court can secure his life – and the White Council's alliance – by solving a mysterious death. It's only as he investigates, he realises far more is at stake than one death, perhaps more than the war between the wizards and the vampires, for the Summer and Winter courts stand poised for war - and this war could devastate the world. And if that weren't complicated enough, an old flame comes back to haunt him.
This book was a great come back from the last one. We have meta-plot, at last. The ongoing war is a thing of drama and interest. If I have any quibble about it, it's that we don't see much of it and it's more a background, nebulous thing when I'd expect it to be more front and centre, especially since Harry is the principle cause of it. Still, the actual drama of the Summer and Winter courts were fascinating, I loved what he did with the fae – making them quite alien and surreal and properly disturbing as they should be. There was also some wonderful world building development which I loved to see – the fae, the White Council, we got a lot longer glimpses into the world AND it was well handled – no damn info dumping.
The plotting also returned to the balance I liked in the second and third book. It was complex, it was difficult, it was sometimes confusing – but never too much. It wasn't convoluted to the point of being unrealistic and nor was it simplistic. I did guess the perpetrator early but I admit it was more from a “you're waaaay too nice not to be evil” point of view than actual deductive reasoning. That doesn't mean it was unguessable, but there were multiple subjects and many lovely twists and turns.
Murphy was also back and while she had some fragility that makes me leery – I really don't want her to be leaning on Harry, he's already rescued her a few too many times – she also kicked arse in a most righteous manner. And with a chainsaw. This pleased me it did.
And on the less shiny front:
I am getting past tired of Harry's “chivalry.” If a woman asks him to do anything (well, any hot woman. But there has only ever been one woman who wasn't conventionally attractive in the whole series – and she's half-troll. Chicago is apparently full of beautiful people) he will cave and do it. No matter how ridiculous, how self-destructive or how patently foolish it is.
It's not chivalry, it's being a mug. An easily manipulated chauvinist mug. Especially when you accept as helpless, delicate damsels beings that are beyond super-powered. It's getting old and it's getting tired. Can we stop having his brain switch off every time some mammaries come into view? Or at very least have it not treated as a decent and noble thing?
Similarly tired is his “I won't be bullied!” attitude that instead seems to mean he will act like a complete arsehat to anyone who he sees to be in any kind of position of authority. Wearing a dressing gown to a White Council meeting was ridiculous – he'd always had robes in the past. It doesn't make me think “strong and independent” it makes me think “childish, rebellious teenager.” This happens a lot in Urban Fantasy and it's tiresome. You can have a strong character that shows respect. You can even have an independent character that shows respect and even due deference – can we have more of this and less people who would say “fuck you” to deity just for the sheer hell of it.
There was some racial diversity in the White Council (and an all-white White Council would have been vexing) but we also seem to be seeing hints of non-white = foreign element here. The POC exist to emphasise not so much diversity of race so much as diversity of nation.
Still no GBLT people. Not surprising and I've given up hoping. Actually, that's a lie, I didn't really expect it to begin with.
This book? I liked it, yes yes I did. I would recommend it – in fact if this is how the series progresses I would recommend the previous 3 to get to this point. This really feels like the beginning and the previous books more prequels or introductions.