Review: The Hunted by L.A. Banks, book 3 of the Vampire Huntress Legend 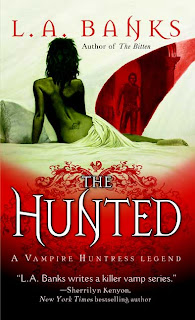 So we open up knowing that Damali & her gang are depressed. I'm not entirely sure why they're all depressed – they just kind of are. I think it's because they escaped from the tunnels of hell but Carlos – a vampire who none of them knew – didn't. This also really depresses Damali who expresses this by having a random vampire kill, just because and decides to have a reunion with an old friend, drink booze and spend some time reminiscing and being depressed

We know they're depressed because they spend an awwwfully long time telling us that they're depressed. No, really, this is like 15% of the book here, spent telling us how depressed they are. They might rename the “exposition room” to the “moping room.” I honestly didn't think I'd finish this book because that first 15% was almost impossible to read. Somehow, I managed. I wish I hadn't. This book makes me feel I have to go back and re-read Sunshine, our only DNF review because if I got through this I owe McKinley a second chance!

What? It's hard to follow the plot when your brain is screaming for you to put the book down.


As can probably be guessed, this book has problems for me. Mainly the writing – it's so overwritten and drawn out. Show don't tell, please! Interminable dialogue makes this book a hard read. There are a ridiculous number of scenes that involve the characters just sitting around talking to each other in dramatic fashion – and it doesn't advance the plot or convey any new information. It's not even exposition (though there is a lot of that too) it's repetition of the exposition or emphasising the exposition – or, most of the time – making sure everyone is aware what emotion someone is feeling. No really, if Damali is sad we can't be shown her sadness – we have to hear every damn member of her group tell everyone else how sad she is. We often see this same scene played out over and over – one person doesn't understand something. The exposition, the world building, why Damali is sad/Carlos is horny, whatever, they don't understand. And then everyone else explains it to them in PAINFUL detail. And they still don't get it, so it gets explained again. Sometimes it gets explained a third time. Bonus points if you have a tag team of different people explaining it to them.

I said above that they should rename the exposition room should be renamed the moping room – and that's unfair. Because while there's a WHOOOOOLE lot of moping, the exposition is unbelievable. I couldn't even count how many pages just involve Marlene explaining things – with all the same disjointed, interrupted style that made the first two books so hard to read. There's also an added dose of angst and self-reflection in this book that makes me want to scream. Carlos, Marlene, Kamal, Shabazz, and Damali all take turns having painfully long scenes talking about their emotional dramas or thinking about their emotional dramas or arguing about their emotional dramas. Guys, get over it already and save the damn world. Remember, werejaguar thing? Dead people? This ringing any bells or is the self-pity drowning it out?

There's also some very leery points. Each Master having a team of female servants is skeevy (all the Masters are male, we have to add) and the ongoing contest to claim Damali's womb is very uckies – her babies will either be warriors for the light or warriors for the dark – and it all depends on the daddy. So there is a huge contest to see which side will sire her kids. Yeah, uckies, definitely uckies. Carlos is ridiculously protective of Damali, despite being death-on-legs Neteru Vampire Huntress. He gets angry when he senses she may be worried or doubt his ability to protect her – and irritated if her thoughts indicate she may challenge his oh-so-alpha maleness when establishing his territory. We get a whooole lot of caveman here. Women as assets, giving women away, parading with several women in front of his girlfriend to keep up appearances because “a master doesn't turn away tail.” The one time Damali counters this condescending litany he turns round with a full blown “oh you just don't understaaaand”.

I just don't understand how stuff like that is suppose to translate to a supernatural world, especially where a female vampire (if she's a second generation) could be massively more powerful than a male (if he's 3rd generation). Where's the mighty female vamp picking and choosing her male “tail”? (And gods forbid anyone actually be not straight). And honestly this is the tip of the iceberg, there was a whole lot of side-eye here.

On GBLT people we have, again, big bad evil master vampires chuckling away about how they'll enjoy coercing Carlos into sex. Yeah, coupled with the only other reference to 2 men together are allusions to prison rape and I'm giving some side-eye.

I have to make a special mention of the sex scene in this book because it came highly recommended. Oh. Dear. Gods. Come back Anita Blake all is forgiven. This sex scene literally takes up 6% of the book. I kid you not, a full 6% of this book is 1 sex scene. It goes on for pages and pages and pages and pages. It's not only boring reading it, but, by what's described I'd probably be bored rigid being one of the participants too. In fact, most of it doesn't actually involve doing anything except describing how very hot they find each other. Oh and we get it all to a perma-backdrop of Carlos wanting to “brand” Damali, saying “mine” 101 times, how he wants to “rewire her” so she never touches another man and how “her pussy is mine.” Yeah... I admit, as a gay man, that I'm not the best person for judging the hotness of het-sex, but this? Not sexy.

The plot of this book could have been good. It could have been interesting. And LA Banks has a huge and complex world here and a racially diverse cast (though with heavy erasure elsewhere). In fact, in the last, oh, 10% of the book, the plot was good. I actually found myself reading and it only being an uphill struggle (rather than rock-climbing up an icy, sheer cliff in torrential rain, the normal amount of struggle to read her other books) and I was almost almost enagged and excited and enjoying it!

But, in general and even in that last 10%, the way this book is written makes it beyond a chore, it's painful. The endless exposition, the endless sitting around and talking, the endless heavy emotions that are described in agonisingly painful detail, the endless navel gazing – in short, the endless unnecessary waffle makes reading this book like swimming in maple syrup – only much less kinky. For the ending, I rate this book marginally higher than the Minion and The Awakening. But it's a matter of rolling out of the cesspit and landing in a midden heap. I wouldn't recommend this book – in fact, I think if I did I may be guilty of a crime.

For the ending, I gave it 1 desperate, lonely fang - not because it's worth 1 fang, but because we don't have 0.75 fangs and I have to give it SOMETHING to say it's better than the first 2 out of sheer pity if nothing else. Damned with faint praise indeed. Even now I'm looking at the other 1 Fang books and thinking that even drek like that doesn't deserve to be affiliated with this.