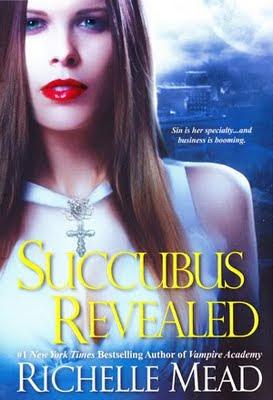 Spoilers
It's always a bittersweet thing when you come to the end of a series that you love.  I stayed up the better part of the night finishing this book and though I am tired, it's a happy kind of tired.  I have to say that this is the first paranormal romance story that I have loved from beginning to end. It was filled with erasure that took the form of no GLBT characters whatsoever and extremely limited roles for people of colour, but in spite of all of that I could not help be embrace the characters.
Succubus Revealed basically involved the big showdown between heaven and hell, the importance of true love and the value of a single soul. In my review of Succubus Heat, one of the issues that I found problematic was the declaration of love between Seth and Kincaid because in actuality they had only been dating for the three months.  The I lurve you for evah and evah based on nonsense, is a common trope in urban fantasy and it often reduces the strength of an emotion like love.  Mead directly confronted this trope by setting up Kincaid and Seth as lovers who had met and fallen in love over 10 lifetimes.  This is why it makes sense that after only three months, that they were so drawn to each other. I really liked this take on love and it really made the interaction between Seth and Kincaid real.
For me, one of the most beautiful parts of this story was Carters description of a human soul. On page 236 Carter says, "It was actually for two souls, since you and Seth were both saved. But even if it wasn't, it still would've been worth it.  Do you know the price of one soul Georgina?  It's beyond rubies and diamonds, beyond any mortal reckoning.  If it had taken me a dozen more angels to help me, it all would have been worth it."  It warms me to read that there is something intrinsically good and pure about us all.
Never did I imagine that Carter's sole purpose was to free Kincaid from her terrible contract with hell.  It sort of puts the conversations between Jerome and Carter into context as well. They were never actually friends, they were competing for her soul. In many ways it reminds me of the parable of the wind and the sun.  Carter never pushed his agenda, he guided with gentleness and love.
Yeah, I know I am sounding sappy but that is what this story did to me.  Even though in many ways it's not as complex as say Vicki Pettersson's Cheat the Grave, because it depends on the binary of good versus evil, rather than in depth exploration of the of grey areas, but the pure innocence of a love that is meant to be warms my heart. Some would argue that Kincaid, and her motley crew of friends absolutely represented the grey because they all worked for hell, but I believe that they represented goodness or the potential to be good in all of us because they valued love friendship, love and loyalty.
I am really glad that I read this series because I really had given hope on Mead creating anything worth reading after her Vampire Academy series.  I think it would be fair to state that I loved this series in spite of the erasure and the fact that it really is paranormal romance rather than adult urban fantasy. I loved it because for a brief time it allowed me to hope and dream and that is no small thing in a world with so many negatives.