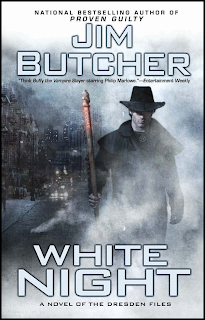 Magical practitioners are dying. Not Wizards, not members of the White Council, but lesser talents are dying not just in Chicago but across the US – their deaths a series of tragic suicides. Harry's looking to find out who and why – and whether his brother is involved or not.
Caught up by White Court machinations he also finds himself further enmeshed in the vampire politics behind the war. To complicate matters, he also has to balance teaching his new apprentice, the machinations of Lasciel, the Fallen Angel that has taken up residence in his mind and the ever-worrying presence of the mob boss, Marcone who always plays his own very dangerous game. Oh, and his ex shows up. Never simple, is it?

Worse the Dark Council continues its plots behind the scenes, confusing who can be trusted – and summoning daemons that make even normal daemons seem tame and mundane.
The plot synopsis may seem a little short this time, but there weren't a great deal of sideplots or complications in particular. It was still an involved, complicated plot with plenty to keep me interested and it kept me guessing and wondering for much of the book. The plot is not simplistic – it is simply lacking in side-tracks and more focused than other books. Which was probably good, after all, not everything needs to have 10 red herrings and 11 antagonists (though, ironically, the antagonists in this book are renowned for their convoluted plotting and scheming). It still has the same excellent mystery feel as his other books, with the same guessing, the same investigation and that same wonderful balance between “complicated” and “convoluted” that I so love in the Harry Dresden Series.
I loved the White Court world building and the greater development of the 3 White Court houses, the world is continually revealed with new things being added without any of it being contradictory. It's a big world and it's well made and well done.
This story ended in an awesome amount of epicness. Butcher does do grand fight scenes and dramatic finales extremely well. It wasn't on the same standard as Dead Beat's ending but, then, very little is.
I also loved the banter. There's always great banter between the characters that usually makes me smile and occasionally makes me laugh :) The relationship between harry and Murphy and Harry and Thomas is complex, involved, fun and interesting – I like it. Harry and Ramirez also promises to develop – I hope so, they bounce off each other well.
If, storywise, I had any complaint then it'd be the way that so many things have happened in the background in previous books that aren't being developed or seem to have hit the pause button. What's happening with the war? What about the Winter and Summer Courts? What about the favours Harry owes Mab? What about the Black Court and the Word of Kemmler? When is Harry going to do something with that damn sword he got from Shiro? There's just a few too many loose ends that have been lying around loose for a little too long. I don't necessarily want these plot lines to be concluded (they're not getting in the way) but I would like to see them develop (and less about Elaine who, to be honest, I don't care about).
Social justice wise... there were problems.
Again we had no GBLT characters. But we did have homophobia. This is something that has increasingly annoyed me in the genre – if you are going to completely erase GBLT people from your world and your story then the very least you can do is not include homophobia as well.
What further irritates me is how unnecessary it was. There was no reason for Harry to pretend to be Thomas' lover to have him explore his flat, and if we had to go there, there was no need for the stereotyping (He was inspired by a Wizard of Oz poster. He behaved ridiculously hysterically. He was tempted to fake a lisp. A lisp? C'mon, really? Really?). There was no need to have Thomas need to pretend to be gay because it's the ONLY way to be a stylist. And there was no need for security at Thomas' flat to spout some really nasty homophobia. And no, it doesn't help to have Harry point out they're bigots when a) he's just engaged in gross stereotyping and b) he yucks it up with some gay jokes with Murphy later.
None of this advanced the plot, the world, developed the characters or did a damn thing for the book. Can we stop this now?
The treatment of women in the book remains problematic. While there are strong female characters (Murphy rocks like a rocking thing and kicks arse most epicly though she's pretty much being reduced to muscle Harry brings in at need), they are all less powerful than Harry. I was particularly sad to see that Elaine, the strong and powerful wizard, needed rescuing and that the victims who needed sheltering were all women. It also irritated me that we had to spend so much time emphasising Elaine's vulnerability – especially since we'd already done that with Susan and Murphy in previous books. There's also the endless over-description of every and all women we come across – and how much Harry enjoys watching them – Harry, go get laid already and let off some steam because this is part tiresome. On the plus side, the interactions with Molly were not nearly as bad as I predicted.
POC-wise we had nothing but Ramirez – who remains an awesome character who is great fun – but sadly, again, conspicuously junior to Harry. He could use more development and screen time since he's a bit hollow at the moment (and, again, only shows up when Harry calls him in to help. I would much rather he and Murphy exist outside of Harry's need for backup). I do hope for more from him though, though not very much I have to admit.
Harry's burned hand has now healed so much that the scarring is little more than an aesthetic issue. Remembering that this hand had no movement, no sensation and doctors advised him to have it amputated, it has now healed to almost full functionality. It's a tired trope to decide that a disabled character simply has to be miraculously healed during the story.
Problematic elements were pretty gross in this book. Despite it, I liked it, I liked it a lot which just makes the flaws all the more eye-sporky. I don't hesitate to give it a high fang rating, despite the problems – the story, the world and the characterisations are excellent and I would certainly read it again.