Fright Night: I Got 99 Problems and the Bitch Ain't One 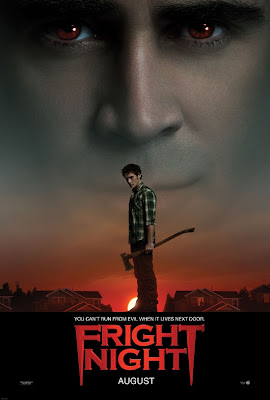 Spoilers
For the purposes of disclosure, I must admit that I have not seen the original Fright Night starring, Chris Sarandon, William Ragsdame and Amanda Bearse.  I went into this movie not really knowing what to expect and I have to say that while I enjoyed it, Fright Night will not go down as one of my favourite urban fantasy books.

The story is set in Las Vegas and surprise, surprise, there isn't a single  GLBT person. Sandra Vergara who played Ginger Peter, Vincent's (David Tennant) girlfriend is the only person of colour. How is it that a story can be set in an area like Vegas and have so much erasure?  It is not only ridiculous, it is irresponsible. Vergara did not play a major character, and much of the time she spent on screen, she was scantily clad and coarse. Unsurprisingly, she quickly became the victim of the vampire.

The plot begins in a high school, but what is an urban fantasy movie these days without a dose of good ole fashioned teen angst? Teenagers go missing, but no one seems to care because Vegas is a transitory town.  Ed figures out that people are being killed by a local vampire, who just so happens to live next to Charley Brewster.  Ed plays upon Charley's history as a geek and blackmails him into checking out a kid that has gone missing. Charley dismisses Ed, until he finds out the next day in school that Ed is missing.  Charely does some research and determines that Jerry, his neighbour, played by Collin Farrell, is indeed a vampire.

Much of this movie was spent with Charley as the hero protecting the women in his life.  Jerry specifically tells Charley  to watch the women in his life and implies that Amy, played by Imogen Poots is hot and ripe (read: ready to screw).  If that were not enough, Jerry invites a neighbour home for a date and she just happens to be an exotic dancer.  When Charley expressed concern for her safety, Amy dismisses it and tells him that Amy is after all a stripper.  This sends the message that because of her job that she is no in danger of being violated.  How unoriginal, the unrapeable sex worker.This young woman is locked in a room, and naturally Jerry violently feeds off of her before Charley the White knight can save her.  When Charley does finally manage to get her outside, she bursts into flames, because Jerry has already turned her.  I suppose this means that there is no redemption for women who are sex workers. This message is truly driven home when later in the movie, Charley manages to kill Jerry, and Amy who has already been turned is returned to her normal self.

The moment that Charley realizes that Jerry is a vampire and a threat, he immediately begins ordering his mother not to answer the door, or invite anyone in. In what world can a teenage boy order his mother not to answer the door?  Though Jane Brewster, played by Toni Collette of The United States of Tara fame, does eventually tell him that she can do what she wants, she accedes to all of his wishes. The so-called good women in this movie only existed to be saved, and sex workers and women of colour were considered disposable.


I was much relieved that there were no sparkly vampires and that vampire lore was followed in this film.  Jerry needed blood to survive and took it without any kind of angst or yearning to be human.  Vampires should view humans as prey and show no real moral compunction about following their true nature. This is something that vampire Bill from True Blood should really pay attention to.  I absolutely adored that Jerry was not in the least bit musty and was actually very compelling; however, I am sure that part of that had to do with Farrell's dark good looks. There were some decent special effects in this movie which really helped sell the idea that Jerry most certainly was not human.

In terms of social justice, while I certainly have seen and read much worst, I am tired of the erasure, sexism and racism that has been so normalized in this genre.  Even the hilarious denials of being into Twilight, David Tennant denying a desire to join the scooby gang - a clear reference to Buffy the Vampire Slayer, and Amy attempting to kill a vampire with silver bullets (yeah she got her supernatural creatures mixed up), were not enough for me ignore that once again writers and producers refused to make even the smallest concession to equality.  If like me, you really like to watch urban fantasy movies, my recommendation is that you see this movie, only if you are a fan of Tennant and just happen to find Farrell hot, because beyond that, there is nothing new or innovative in this story.  The best that I can say is that while I was not bored, I was not entertained or challenged.