Turned, by Morgan Rice. Book 1 of the Vampire Journals 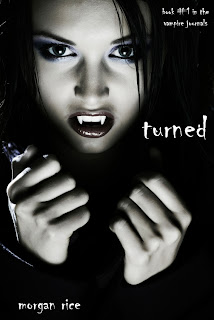 Caitlin is a high school teenager trying desperately to lead a normal life with her absent father and abusive mother. Moved yet again to a new school she tries to find a new balance before having to move yet again – but things are even more complicated now than before. Overcome with powers she doesn't understand and never had before, and a hunger that is all consuming she desperately tries to keep her life working.
Facing a confused boyfriend, a new school, and an uncaring parent would be complicated enough – but instead she finds herself over the body of her first victim, hunted by the police and caught between 2 vampire covens, one of whom determined to capture and possibly kill her – to say nothing of Caleb, and ancient and handsome vampire who seems to care for her – and thinks she may be the Chosen One for all of them

I have to say when I read the first page and found that it was a story of a teenager going to a new school, and how miserable it made her and how sad she was about it, I put the book down and had to brace myself to continue. Another story of miserable highschool life with vampires was most certainly not what I wanted to read. Reading on it didn't get much better – she moved from a good suburban school to a poor inner-city one which was presented as grim, overcrowded and generally violent and awful as possible. The other students were loud and violent and ignored her. She felt isolated (but not because she was the only white girl! She totally had black friends) and alone and then she met a boy and he was nice and sweet and played the viola and he was sensitive and kind and we can already feel the teeny twu lub coming on.
It was also more than slightly convoluted. Her new love interest is beaten up on the first day of school and she rescues him with her new abilities. On the second day of school she has a ridiculous argument with a teacher other the teacher saying “not acceptable” rather than “unacceptable”. Her brother pops in to say high without any characterisation and her mother just kind of looms in the background as a source of angst
Yes, I don't enjoy these kind of books and I was seriously dredging through it at this point. Nearly 40% of the book is spent on 2 days of school. I was thiiiis close to a DNF.
Then it all changes, Caitlin learns the truth about her heritage, is on the run from the police, escaping from one vampire coven, being rescued by another, running through the sewers and the streets, fighting for survival, fighting vampire,s hiding from them, hiding from the police. Suddenly at 50%, a lot happens all at once, we leave the high school drama so far behind that we can't even see it, it's like an entirely different book takes over. The plot is different, the pacing is extremely fast and we're slammed with a huge amount of knowledge, numerous different covens of vampires, a prophecy, half vampires, a magic sword, differing elder councils – it becomes a blur of action and reaction.
However... it doesn't actually become good, I have to say. We switch from a bad book to... another bad book. It's better – but it's still not great.
Firstly, I don't like any of the characters. Caitlin is an extremely passive person, just bouncing with events, though give the amount happening I can understand that, but it doesn't make her very engaging. Other than that there are no real other characters to latch on to. Oh we have Kyle, the evil vamp and Caleb the good vamp and Jonah her high school love interest – but we don't really know anything about any of them and what we do know about them is just so over the top. Kyle is evil and hates absolutely everything, Caleb is silent and broody and sexy (and has an ex-wife who haaaates Caitlin, of course) Jonah is sensitive and sweet... they're all very much caricatures.
The relationships are weak to say the least. After her first day at school she latches onto Jonah like a lost puppy and we have the twu lub developing after the second day of knowing him (and half a date). When being rescued by Caleb, they literally don't exchange more than 3 words but suddenly she NEEDS him and is asking him plaintively “don't you care about me?” I don't think he even knows her name at this point and she's declaring her undying love for him. And in return he's deciding to throw out everyone he knows, his position, his life, everything for a girl he hasn't had a single conversation with.
In fact, being over the top is the theme of this book. The bad guys are big and bad in a dramatic “let's twirl our moustaches fashion”. They're also clumsy, inept and rushed - they don't even think of questioning her when they kidnap her. They talk about keeping a low profile but frequently huge mobs of vampires slaughter cops in the middle of the street or parks. There is little nuance, little subtlety, little deep thinking, in fact, little thinking at all. It's very clumsy, clunky and in places rushed through and everything is melodramatic and over done to the point of farce.
At this point I feel almost like I'm being mean but I have to mention the writing. It's rushed, lacks description (except of sexy guys) and has an appalling abuse of pronouns. Honestly, if Caitlin didn't live surrounded by men, I'd be utterly lost by the endless “she” abuse. The grammar, word choice and general style frankly screams for a good editor. The writing isn't the killer of this book and not its worst element - but it does exacerbate everything else and turn “dreadfully boring” to “painful and dreadfully boring”.
While there were POC, there was really only one character in the whole book – no GBLT characters caricatures or tokens.
The best thing about this book is that it's short. At 165 pages it didn't have the stamina to totally drain my will to live. It also has some decent cover art. Thus concludes my praise for this book. I've read worse, but on the whole it wasn't very compelling and was awfully heavy handed and the first half was pretty painful to get through. I probably wouldn't even recommend it to Tami – it's more dull than horrific.

Email ThisBlogThis!Share to TwitterShare to FacebookShare to Pinterest
Labels: 1 Fang, I'll never get these hours back, morgan rice, the vampire journals, turned