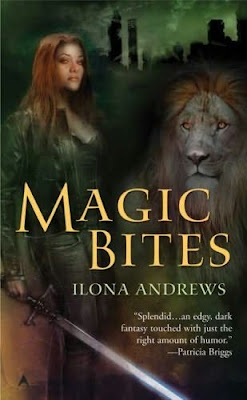 Kate Daniels is a mercenary. A sword for hire ready to kill, find or save whatever people pay her to in a world that has gone mad.

And it well and truly has. After centuries of technological domination, magic swept in on a wave of destruction. Technology failed, skyscrapers collapsed and now the world lies in flux between them – when magic fails the tech works and spells fade – then the magic rolls in spells surge – and technology ceases to work. In among that, lycanthropes, vampire-piloting necromancers and so much more vie for power in a world that is still finding its feet.

And in among all this, Kate's guardian, the closest thing she has to family left living, is brutally murdered. Having to step into the light, deal with people far further at the food chain than she ever wanted to work with all while trying to keep her family secret hidden, she has to find the killer – and avenger her loss.

The most powerful and amazing thing about this book is the world. The world is huge, deep and, perhaps most surprisingly, pretty original. We have werewolves, vampires, necromancers, magic users, psychics and fluctuating magic and technology in a new and different setting. In a genre where we often feel like we're walking the same paths, this book brought a lot of new concepts and new versions of old themes. And I loved it. There's so much there that is new and it's so broad and deep that it's impossible to grasp this world in one book – or anything less than a huge series.

Perhaps even better, the author doesn't try. To me she had that perfect balance of good world building – she has a huge world but doesn't info-dump us. We don't get long lectures, we don't get endless campfire discussions, we don't have a learned mentors rambling on to apprentices and we don't get the characters sitting around engaging in long, convoluted mental monologues to explain the world to us. No, they discuss and think about the world when it is relevant to do so. They give me enough information to intrigue me, make me curious, want to know more, but not enough to inundate me or break the flow of the story.

I was a tiny bit frustrated that it was a mystery that, on the whole, didn't allow you to figure it out. But that's a personal preference thing. I don't demand to be able to figure it out, but I like to think it's theoretically possible that I COULD have figured it out before the reveal. Not a major issue, but somewhat annoying with the main character grumbling “how could I have been so stupid” and I'm saying “no way you could have got that!” I actually prefer this to the more common “Oh look, I made a random guess based on nothing and it turned out to be right!” that is so much more common.

Other than that – the story is interesting, a classic whodunnit with the usual red herrings, leeds and confusion which always can hook me in – especially when set against such a world. It was a trifle more convoluted than I prefer, as mentioned above, but it was also very focused, with few distractions or side plots so it never became confusing or lost.

Character-wise I generally like Kate. She doesn't have any traits that make me love her, but she is confident, powerful, independent and free of the need to collapse now and then – though there is a creeping “I'm so lonely....” vibe that I have a feeling is going to get really old really fast. Perhaps, more uniquely, she is relatively intelligent as well and so far hasn't done anything that makes me want to throw the book down in disgust. I'm not saying she's a genius, but in a genre where near suicidal foolishness is the norm, she is refreshingly free from Spunky Agency. Sadly she has a tragic background (again. Everyone in this genre has a tragic background) that makes her maudlin at times. We also have a bad case of Keille Independence and her mouth has got her into a lot of unnecessary trouble. Thankfully, it also comes with some decent with and banter.

So I kind of like her, I don't find her objectionable but I'm not going to declare her a favourite of mine yet. The other characters aren't quite developed sufficiently for me to make a judgement – this book was, in many ways, something of an introduction. I'm torn between liking and being mildly irritated by the Beast Lord, but I admit that the banter between him and Kate amuses me.

Social justice wise, there were some POC but they were rarely characters so much as walk-ons, side references, etc which is especially headache-worthy considering this book is set in Atlanta. Again, we have no GBLT people. The villain is, well, several kinds of nasty as you'd expect from a villain, but he has a side-line in rape and specifically targeting women that just adds an extra layer of unpleasant and unnecessary nasty on there.

All in all, I'm kind of sad that I left this book languishing as long as I did, because it's one of the better ones. I'm inclined to give it uber high marks but that may be more due to novelty and surprise as anything else. But it's certainly a book I'd recommend, even if I am seeing it as rosier than it is.