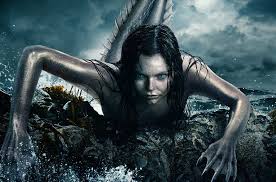 Ryn has been taken to the police station - by two cops. Ok, I want to see the deleted scene where 8 or 9 police all have their limbs ripped off OR Ryn gets shot - because I don’t see her reacting to the THREAT of a gun being pulled on her (because does she even know what a gun is?) and I fail to see how any amount of cops could restrain her without injury given the whole super strength and hyper aggression.

Sheriff Bishop interviews her, apparently taking her obvious cognitive and communication difficulties to waving her right to a lawyer and Sheriff Bishop needs a swift kick in the yin-yangs for this one. Either he thinks she’s impaired by drugs (his obvious theory) or he is mentally disabled either way she at least needs a competency check not questioning for murder.

Unsurprisingly Ryn confesses everything but doesn’t understand when Bishop asks her who helped her - because he doesn’t believe a tiny woman like Ryn could have done the damage she did (again making me question why she didn’t use her strength when she was arrested). She says Ben and Maddie helped her because they did - albeit not with murder

Also she’s an accessory to murder. Just, y’know, in case anyone was interested? No? Ok

Maddie realises that they need to tell her dad the truth especially since Ben has gone out in the boat with Xander and Ryn is worried that Donna will murder them all as is her plan. First we have Maddie drawing upon her and her dad’s Native American heritage to tell stories about shapeshifting people. And they even have panpipes and drums behind it - really? Oh the cringe the cringe.

Of course “I wasn’t covering for a murderer, I was covering for a murderous alien sea-creature who responds with violence in the first instance, is super strong, can mind control people and also I may be on the hit side of a military conspiracy” may not necessarily be better?

But back to that boat. So Xander is obsessed about finding and catching a mermaid. Ben isn’t really in for that but he is for stopping the military trawler from catching any mermaids. His plan is… Look, as I’ve said before the characters of Siren are not known for their decision making. He intends to do something which doesn’t involve the military shooting them or the mermaids eating them

Cal and Chris are along for the ride even though they’re both on record with not really wanting to be or trusting Ben for that matter. Things get a little complicated when Xander’s dad wakes up - he’s been staying on the boat due to some marital difficulty and Xander didn’t notice because, damn man, you need to call your mother more often!

He wants to know why the hell the boat is out at sea in the middle of the night. The explanation “we’re hunting mermaids in the middle of the night while fighting/avoiding the navy” doesn’t sound like a great response… which gets to him and Xander arguing since Xander thinks this is his one chance to be something more than a fisherman (Siren logic again because… how? I mean how is going to make money off this? Sell a mermaid, display one? Either way the Navy’s going to swoop in as they did last time - like they did with Chris)

Eventually Ben convinces Xander senior (I’m not looking up his name, he’s not going to be around much longer) to do it anywhere because government bad or something.

Cut to dry land where Decker, whose evening listening includes recorded Siren music which cannot be healthy - gets a message from the Ominous Admiral that they’ve lost contact with navy trawler. Yes ominous

When Ben & co arrive on the military ship they find huge Narwhal tusk spears, no people and everything shut down all Mary Celeste-esque. They’re smart enough to realise it’s time to run as fast as they can but not enough - Donna is here. And so is a merman wielding narwhal spears

We have lots of fighting and running through big shadowy ships but, despite murdering who knows how many navy sailors, Donna and merman don’t slaughter Ben & co. Instead the rag-tag crew manages to drive them off - but not before Donna gives Chris a dose of Siren Song and Xander senior gets fatally wounded so he can tragically leave his boat to his son with all the sadness et al

Personally I think people really need to stop trying to fight mermaids on the water without lots of machine guns.

We now have 2 violent Black mermaids to contrast with the more reasonable, more human white mermaid